Home » Our World » Why Americans Drive Automatics (and Europeans don’t)

Sing it with me! “Go Greased Lightning. You’re Burnin’ Up the Quarter Mile. (Just the sopranos now) “Greased Lightning! Go, Greased Lightning!” That song will bring one of two images to mind. 1. John Travolta’s head weighed down by Brylcreem, or 2. You and your Little Deuce Coupe climbing the Grapevine*, downshifting on the corners and shifting into high (That’s what we called it back then, kids) on the straightaways. For our purposes, Gildshire is leaving Mr. Travolta out of it because our focus today is on the gear-jamming aspect. While our European counterparts still clutch and shift, Americans have rejected the standard transmission in favor of automatics. Why is that? Gildshire wonders. The Reader’s Digest helped with the research on the question of why Americans drive automatics.

The Curse of Multitasking:

Back in the day of the ducktail and chrome fins, driving was what you did while you drove. It seemed so simple back then but has been so complicated since. Let’s see by a show of hands, how many of you use your Bluetooth while you drive? How many skip the Bluetooth and actually talk on the phone? (Don’t worry, the State Police have been shielded from this article.) How many of you combine your car-driving errands with eating the occasional sandwich? Oh, you don’t eat, but how many of you drink a cup of coffee or a soda behind the wheel? Be honest with me. Not once in the last month? Ah, there you go. Thank you. 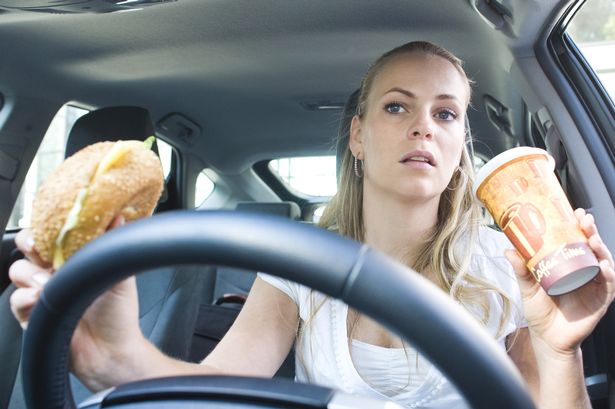 Americans drive automatics, because they think they have better things to do than shift.

The statistics show that you are not alone. Hence, the American driving experience is cluttered by actually shifting the gears on their car. We prefer to enjoy Jimmy John’s Little Pepe’s sandwich while we cruise the city. The transmission will handle the shifts.

Europeans Have a Different Relationship With Cars:

There is a current ad campaign for the Toyota Corolla. It shows the car gliding through a car wash, while the couple in the front seat retire to the back seat. I’m guessing to find a dropped quarter. This scene would not take place in an E.U. nation. That isn’t because Europeans lose quarters in the back seat less frequently than Americans. Europeans prefer to self-wash their cars. An automobile, while something Americans carefully shop for, is not a member of our family. We like it to have some curb appeal. But, beyond that, a car is a mode of transportation to the American consumer. A driver in France or Italy will spend a Sunday afternoon carefully buffing out the finish on his Renault or Fiat.

Finally, and in defense of the good ole’ US of A, the open highway in the United States is not like the open highway in parts of Europe. German drivers confronting the Autobahn are traveling with other cars that are driving more than 110 miles per hour. There is no time to buff your nails when the traffic is approaching two miles a minute. If the Autobahn comes to America, our motorists will adjust their driving habits and put away their distractions.

At least that’s what I tell myself when I see someone driving, talking, and working on a hoagie in the fast lane. At any rate, with 96% of Americans opting for the “Do it for me” option, the day is coming when domestic dealerships will stop offering the option. For some, that will be a sad day. For others, “Could I get that pizza to eat while I drive?” Americans drive automatics, and we don’t see that changing.

*The Grapevine is 11.6 miles of Interstate 5, north of Los Angeles. Famed in the L.A. area, it was made famous by the hit song, “Hot Rod Lincoln.”