Since November 12th, 2018, The Whitney Museum of American Art has held an exhibition about Andy Warhol illustrating his life as an artist from the 1950’s until the 1980’s. Warhol’s artistic career ranged in style and medium, but tended to remain easily recognizable as his. The Whitney is honoring the beloved artist after being gifted a huge amount of his pieces from the Andy Warhol Foundation. Should you find yourself in New York City, I highly recommend visiting The Whitney and seeing this exhibition.

Upon entering the gallery, there is a hall on the left that leads to another, smaller gallery. Both areas are covered in Warhol’s Cow Wallpaper, (1966), a bright, neon yellow background with neon pink cow heads repeated over and over again. It has been said that this wallpaper, which was the first of many wallpaper designs, was created because Warhol felt he had exhausted the possibilities of painting. Within this smaller gallery, the cow wallpaper covered all walls and on them hung Warhol’s series, Flowers, (1964-1965). Having Flowers in the space of Cow Wallpaper provided a strange contrast at first. After a few moments of looking around, Flowers made it feel as if the viewer were standing in a pasture, albeit a psychedelic pasture, seeing cows graze flowers slowly and lazily.

Leaving this small gallery and walking back out into the main gallery brings one of the highlights of Warhol’s career, Campbell’s Soup Cans, (1962). The 32 screen printed panels were displayed in a grid, giving off the appearance of soup cans stacked on grocery store shelves. Each can is labeled as a different soup and one stands out, the cheddar cheese soup can, because it says on it in yellow banners, “NEW!” and “GREAT AS A SAUCE TOO!” A small difference that emphasizes the ordinary aspect of the work. Campbell’s Soup Cans along with the several pieces with Coke a Cola as its main content (which there were several of in the exhibition) showcased Warhol’s thought that commercial art can be more than that, it can be considered fine art. 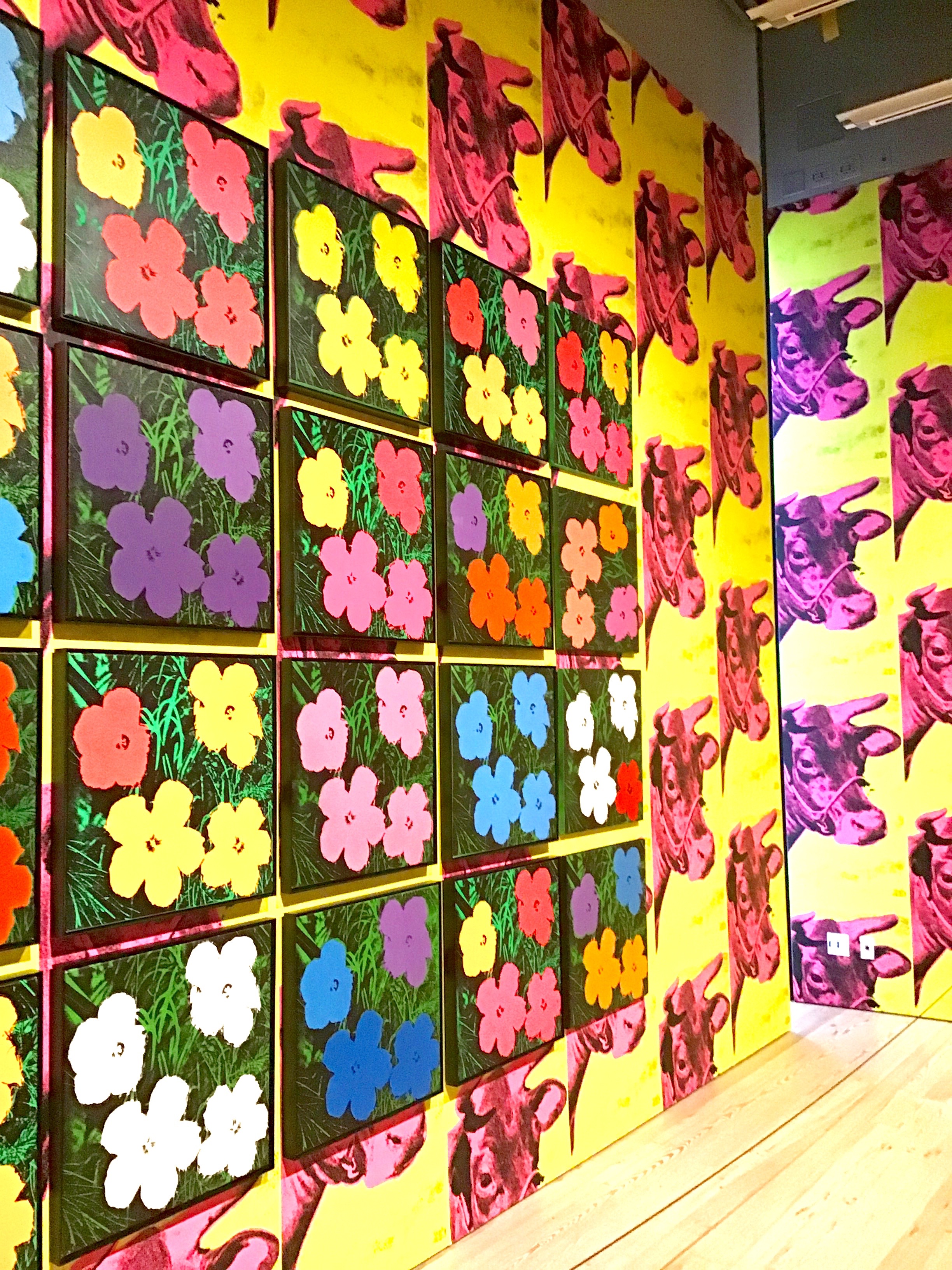 Continuing through the gallery space, the viewer crosses paths with Warhol’s early work in advertisement. His most significant job in advertising was for I. Miller and Sons, a shoe company, because Warhol’s style was well-suited for the type of work: creating personality and life for a product. The Whitney displayed a wallpaper collage of these ads in the New York Times as a background for a series of twelve embossed gold foil shoe collages that Warhol created in 1956. Each shoe personified well-known individuals in society including Elvis Presley, Truman Capote, and Mae West.

In the 60’s, Warhol began using celebrities as inspiration for his works. He used individuals who were receiving high volumes of press as the timing of his pieces was absolutely crucial to him. He was fascinated by popular cultural figures and reflected his personal obsessions by using them in his art. Marilyn Diptych, (1962) is a prime example of this because he created this piece right after her fatal overdose. This piece was actually one of the first to be created using silkscreen photo technique, which Warhol became well-known for. Marilyn Diptych consists of multiple variations of color as half of it is black and white, while the other half is vivid color. Each side has different distortions and proportions of color due to the nature of the screen printing process that Warhol used.

Portraiture in general consistently played an active role in Warhol’s career and The Whitney made sure to emphasize that. Warhol utilized photographs and screen printing to create portraits of individuals who played a role in many areas of society including celebrities, socialites, artists, criminals, and more. The Whitey dedicated an entire gallery space to 75 of these portraits. Each piece is a square canvas screen printed with acrylic ink. Imagine having a neon colored portrait of Dolly Parton hanging in your living room! Publicity was important to Warhol and his portraits were just one way of demonstrating that.

Warhol announced his retirement in 1965, but did not actually retire. He chose to go to a different direction of art and began experimenting with film, video, and other mediums. What he really meant by “retirement” was a pause from his “traditional” way of creating and beginning something new. In the early 80’s, he went back to painting, but went a little more abstract. He created pieces such as Rorschach, (1984) and worked up until his death in 1987.

Are Floral Prints Still in Fashion?