With all of the Covid-19 news out there, you almost forgot about another existential headache. With water levels rising from the melting of the polar cap, the effects of climate change are only accelerating. While that may be lovely for those who live at an elevation 500 feet above the onrushing waves, it is unfortunate news if you bought that beachfront property in the 80s. Because there are many beach towns in danger. Let’s do some math.

There are 13,000 miles of coast in the Lower 48. In 80 years, the contours of the coastline will be much different than they are today. Twenty-one towns and cities in the U.S. that boast a beach in their Chamber of Commerce brochures will soon be feeling the water as it rises in their midst. Rising waters have implications for our health and safety, for sure. But the economy will also take a hit. Finance and real estate, along with town and city infrastructure, will change, and drastically so. Roads, bridges, airports, power plants, and military bases. All at risk of inundation.

So, which towns are in danger, and will the city fathers (and mothers) of these towns be the first to call for climate change action? If they love their town, along with their neighbors who live, work, and play there, Gildshire hopes so. Here’s the list. Lord willing, you don’t see your town included. 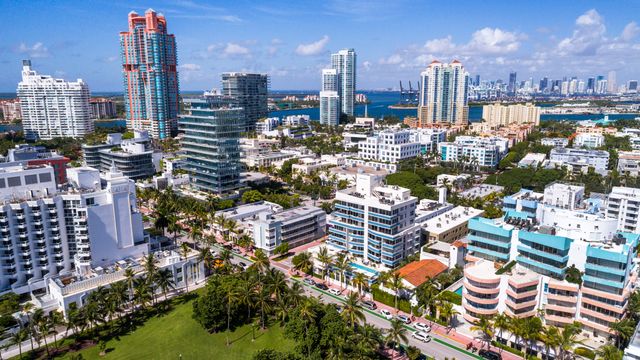 Beautiful Miami Beach is one of the beach towns in danger.

Unfortunately, we start with a medium-large city, pictured above. The population of Miami Beach (not to be confused with Miami proper) is 91,784. This is not to mention the tens of thousands of tourists who pour on to the beaches here. Over 26,000 homes are at risk, and these homes shelter 36% of the populace! An estimated $17 billion in value is on the line.

The population of Ocean City is 7041, but there are over 11,000 homes at risk. There is a 93 percent chance that one, or more, floods of over five feet will happen here before 2050. That, according to Climate Central.

Not to be confused with Ocean City in Maryland, this resort community is already suffering from the effects of climate change. Sea-level increases and frequent floods cost Ocean City $530 million in disappearing property value from 2005 to 2017, according to a Columbia University study. Over 50% of the 11,000+ population is at risk from the effects of continued climate change activity.

A golf paradise for many lovers of the sport Hilton Head will only be viable for a few more years. That’s because some of it may soon be underwater. Climate Central projects an 86 percent risk of a flood of over four feet between the day you are reading this and 2050. Coastal flood days are increasing at a pace of 25% every ten years. Simple math will tell you what that means for the 8194 homes that are at risk in this resort town.

Almost 50,000 people can truthfully say, or sing, “Galveston, My Galveston,” because that’s how many folks live here. Unfortunately, $2.46 billion worth of the property may soon disappear under rising waters. Galveston is 51 miles southeast of Houston It’s an island city, jutting out into the rising Gulf Mexico.

The southernmost point in the United States was home to Ernest Hemingway for many years. If “Papa” was alive today, he would be sounding a warning to his neighbors. Key West’s average elevation is a mere 4.7 feet above the water! It is exceedingly vulnerable to frequent and devastating storm damage. Residents learn to live with flooding, but an NOAA tidal measurement tallied an increase of nine inches in sea level since 1920.

Long Beach, about twenty-five miles south of L.A, is the most populous city on our list. Nearly 470,000 people call Long Beach home, and a frightening number of those people are in mortal danger. Over 3,700 homes are at risk, with an estimated total property value of $2.5 billion. ($675,000 per home. It isn’t cheap to live in Long Beach.) Measuring decade over decade, Long Beach is experiencing 40% more flood days now than ten years ago.

Is your city or favorite vacation destination on the list?  Gildshire counts Key West as a Bucket List place to go. Without significant and worldwide action on climate change these American towns and many, many more around the world will cease to exist in their current form. Beach towns in danger. That’s one more effect of global climate change, just in case you needed one more worry today.

What is the Japanese’ Secret to Longevity