There is a time in almost every child’s life when the idea of being a train conductor sounds like a great one! Leaning out the window of a massive locomotive, sporting the stylin’ striped hat, cocked on your head just so. Blowing the whistle for all its worth. Going to, well, who knows…except the conductor himself. What a life! Well, Gildshire’s third entry in our Black History Month series names as one of the movers and shakers: Harriet Tubman. She was the best conductor this country has ever seen, but no rakishly cocked hat for her. Harriet Tubman was the “conductor” on the Underground Railroad.

On March 10, 1913, Harriet Tubman laid on her deathbed. Her final words were, “I go to prepare a place for you.” One hundred seven years later, she will receive a uniquely high honor as the first African-American woman to appear on U.S. currency. Later this year, her likeness is scheduled to show up on the $20 bill.

“I have heard of her. Wasn’t she the woman who rescued slaves?”

Exactly right! During the height of the slave trade, she led hundreds of oppressed slaves out of the antebellum South to freedom. About her unbelievable feats of bravery, Ms. Tubman would later say, “I was the conductor of the Underground Railroad for eight years, and I can say what most conductors can’t.” I never ran a train off the track, and I never lost a passenger.”

Born into brutal slavery, Harriet endured violence almost daily in her youth. Once, she encountered a fellow slave who had left the fields without the overseer’s permission. When Harriet didn’t restrain the runaway slave, the overseer hit her in the head with a two-pound weight. From that day forward crippling headaches, and even seizures, plagued her.

“As I recall, that did not stop her.”

It did not. Harriet Tubman managed her own escape from slavery in 1849, using the secret Underground Railroad to go 90 miles from her slave cabin in Maryland to Philadelphia. Most runaways would have been satisfied with that feat, but for Harriet, one slave’s individual safety was not enough. Especially if a family member was in danger. Hearing that her niece and children were about to be sold, Harriet went down South to lead them to Philadelphia. Next, she went after her siblings and later her parents.

Tired of losing slaves to Tubman’s railroad, Southern legislators pushed the 1850 Fugitive Slave Law through Congress. This foul bit of legislation dictated that escaped slaves could be captured in the North and be returned to slavery. By rights, this should have been the end of the Underground Railroad, but Harriet Tubman was dauntless. Instead of giving up, she rerouted the Railroad to Canada! Slavery didn’t exist up there. Southern slave owners placed a bounty on her head, but she made at least nineteen, and perhaps more, round trips from the South to Canada and back again.

What a life she led! 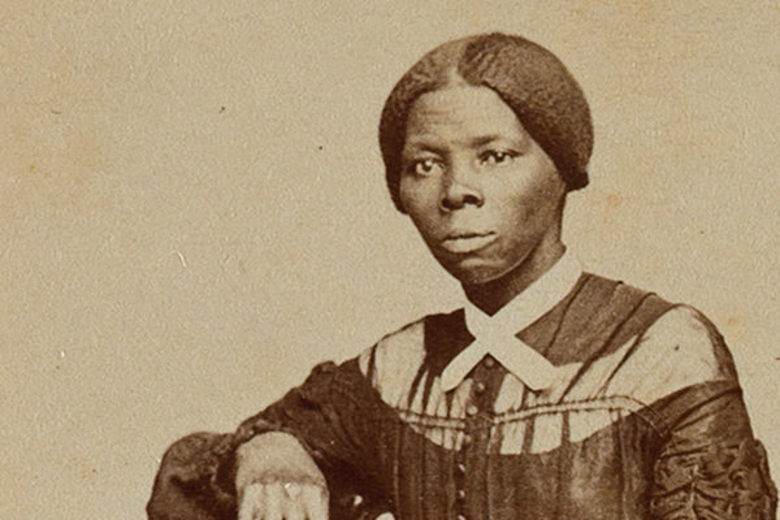 That isn’t all. Later, during the Civil War that would eventually free the slaves, Harriet became a nurse who spied for the Union side. After the war, she cared for her parents and anyone who needed help and care. Later, her home became the Harriet Tubman Home for Indigent and Aged Negroes.

In honor of her heroism, Harriet Tubman was buried with military honors when death took her home to glory. It is our honor to celebrate Black History Month by recognizing as one of our movers and shakers: Harriet Tubman.