Home » Our World » The Coming Impact of the Robot Revolution

Impact of the Robot Revolution 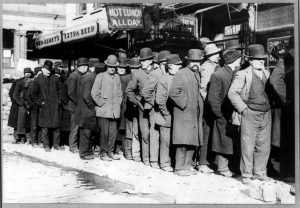 The return of bread lines?

What is the Robot Revolution anyway?

Where will it impact the economy the most? Will I lose my job? We looked for some answers. Here is what we found.

We have known some hard facts for a while. In the coming decades, economists expect the loss of millions of American jobs. Artificial Intelligence is advancing by leaps and bounds. Yesterday it replaced the machinist at the Chrysler plant. Today it takes your order for a double burger and a Frosty. What happens tomorrow when it drives a long-haul semi? The working stiff, replaced by a machine.

Where will those job losses take place? Which areas will be the hardest hit?

The Rust Belt? That’s what we all thought. This area, roughly Buffalo, NY to Milwaukee, was the heartland of American industry. Steel mills belched fire in Pittsburgh. Detroit built cars. Lately, the region has been a campaign football for politicians anxious to be the one who “didn’t forget you,” and “will bring the jobs back.”

We are learning, though, that the outsourcing of jobs to foreign lands isn’t the big problem. Job loss to automation is the worse news for employees in the north and northeastern States and maybe more portentous yet for places far removed from Akron and Cleveland.

New analyses suggest the places that are going to be hardest hit by automation aren’t the ones known for rust and acid rain. They are areas with high concentrations of jobs in food preparation and office/administrative support. 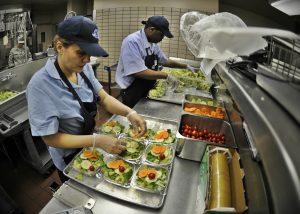 Lunch looks tasty. Will a robot make it tomorrow?

Jobs in Las Vegas and Riverside, Calif. are automatable to the tune of 65% and 63% respectively. Other areas with an employment profile indicating a potential of high job losses to automation are El Paso, Orlando, and Louisville.

Is this a matter of following the money and dumping labor costs? In part, of course. Fail to stroke the shareholders at your peril, Mr. Executive. Surprisingly, though, the Robot Revolution is a potentially greater threat to low-wage workers than to their higher-earning co-workers. In its infancy and childhood, automation hurt middle-class jobs such as those in manufacturing. Now, it’s coming after the low-income jobs. When those jobs disappear, a whole subset of lightly-educated workers who weren’t making much money in the first place will suddenly be making nothing at all.

“Okay. Good information for someone who is entering the job market to have. But, is there any good news? Where should I look to find a job that I can turn into a career?”

Good questions. It’s always best to look for positives to exploit, rather than just negatives to avoid. Some industries and regions will be, if not immune to the Robot Revolution, at least less impacted by it. They include high-tech positions in Silicon Valley, North Carolina’s Research Triangle (Raleigh, Durham, and Chapel Hill), and the Boston-Cambridge area.  A high number of the jobs in those areas require more creative and social intelligence and are thus more difficult to automate.

Of course, these areas are already prosperous, relative to the rest of the country. This suggests that America’s growing regional divergence will only continue to worsen. Berkeley economist, Enrico Moretti said it like this in his 2012 book, The New Geography of Jobs:

“High-tech job centers like Silicon Valley are drawing in educated and talented people, and thus pulling them away from the rest of the country. This has implications not only for employment, but also for socioeconomic outcomes such as health, family stability, and crime.”

In other words, not everyone can, or indeed wants to, live in San Jose. Does this mean the thousands of miles between there and Raleigh are doomed to exist in some kind of Dystopian wasteland awaiting salvation from Katniss Everdeen?

One would hope for a better fate for the so-called flyover states, but there is no doubt that a handful of cities with good jobs and highly educated workers will thrive. Other areas are going to see jobs disappear at an accelerating pace as automated technologies become ever better.

They say this is a divided country today. Wait until the forgotten sector of society gets its walking papers a million at a time.

How to Move on from Grief and Anger?

Driving Aids Resulting in the Worst Drivers in...

How to Be a Leader?