We take maps for granted. Struggling with paper maps or a lagging GPS annoys us. Hundreds of years ago, however, travelers didn’t have reliable paper maps. There was no set outline of the world – just random collections of different geographical regions not necessarily drawn by people who had ever been there. The creation of the first atlas marked a huge step forward for civilization, and two men played significant roles. 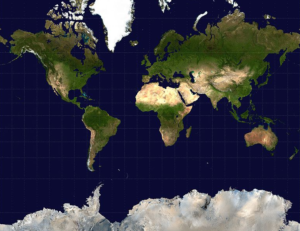 Born in 1512, Gerardus Mercator’s world was vaguely-outlined. Sailors, merchants, and explorers collected information on the lands they traveled and brought them to cartographers, who did their best to imagine what the world looked like from above. Mercator became a mathematician and intellectual, and focused his work on maps. He didn’t travel much, so he collected his information from thousands of books and maps. He also spoke six languages, so he wrote letters with other great minds of the day. His maps hung on walls like tapestries, they were so big. In 1569, he created what’s known as the Mercator projection. It’s cylindrical and uses straight latitude and longitude lines. Sailors using this map didn’t have to recalculate their bearings.

Unlike the older Mercator, Abraham Ortelius traveled extensively. In 1547, he became work as a map illuminator. It didn’t pay much, so he also traded books, prints, and maps. He traveled to Frankfurt, Germany for this business, which is where he met Mercator in 1554. This relationship might have inspired Ortelius to lean towards map-making.

The Theatre and the Atlas 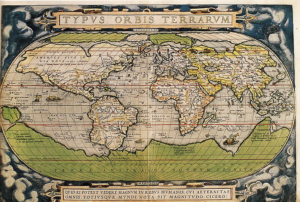 One of Ortelius’ maps

Ortelius began buying maps, redrawing them in color, and mounting them on silk. Sailors wanted something in a book, however, with bindings. With Mercator’s assistance, Ortelius collected the best maps he could find. In 1570, he released his “Theatre of the Round World.” It’s considered the first atlas, even though it doesn’t bear that name. The first edition consisted of 53 maps but Ortelius continued improving on it as copies sold out. When he died in 1598, the “Theatre” had 25 editions published in seven languages.

Mercator didn’t stop his work either. He created detailed a book collecting 100 new regional maps, illustrated title pages, and text describing the countries and even the creation of the universe. These types of descriptions actually make up the majority of the book, with the table of chronology totaling around 400 pages. He called the book an Atlas, after King Atlas of Mauretania. According to legend, this king created the first celestial globe. Mercator died before he could publish the Atlas, but it was released in 1594 just a year after his death. You can take a look at a digital copy online for free.

Mercator and Ortelius are both revered for their contributions. On May 20th, 2018, the Google Doodle featured one of his maps, and originals go for tens of thousands of dollars at auction. Most public schools until 1991 used Mercator’s Projection, misleading people into believing Greenland is the same size as Africa. It’s hard to imagine a time when we didn’t know what the world looked like, and we can thank men like Mercator and Ortelius for paving the way. Using science and their imagination, they brought the world into focus.

Back in the days before accurate maps and GPS, traveling was difficult. Now, you can go just about anywhere, like to these unique AirBnBs.