“The Fords are just too fast.” Those were the words to the wise during Speed Week at Daytona International Speedway. But, veteran race fans know that burning rubber Monday-Saturday doesn’t always mean a waltz to the winner’s circle on Sunday. We were reminded of that fact one more time this last Sunday when Denny Hamlin drove his Toyota to victory in the 61st running of the Daytona 500.

In a wild two-lap dash during green, white, checkered overtime Sunday, Hamlin beat back a determined effort from Kyle Busch to win.  This victory was Denny Hamlin’s 32nd in what is now called the Monster Energy NASCAR Cup Series. It broke a 47-race losing streak for the still young-looking 38-year-old from Chesterfield, Virginia who’s Number 11 Toyota Camry commemorated the late J.D. Gibbs and the late Glen Wood, founding members of the Wood Brothers Racing, with stickers. Both gentlemen passed away in the last year.

After the race, Hamlin paid tribute to the departed members of the race team, making special mention of J.D. Gibbs:

“The whole (Gibbs) family — they did so much for me over the course of my career. This one is for J.D. We’re desperately going to miss him the rest of our lives. His legacy still lives on through Joe Gibbs Racing, and I’m proud to do this for them.”

Carnage in the Final 30 Miles

The 61st edition of The Great American Race was fairly uneventful early but featured plenty of pileups and five late-lap cautions. There were just 14 cars on the lead lap when all was said and done as night fell on the historic tri-oval. The 500 miles were calm by restrictor plate race standards. But, all hell broke loose ten laps from the end of regulation time. As the field arrived at Turn Three, contact from Paul Menard’s Ford sent Matt DiBenedetto’s Number 95 Toyota into the outside wall, and back through traffic. When the smoke cleared and the sparks stopped flying through the air, 21 cars were damaged, some catastrophically. 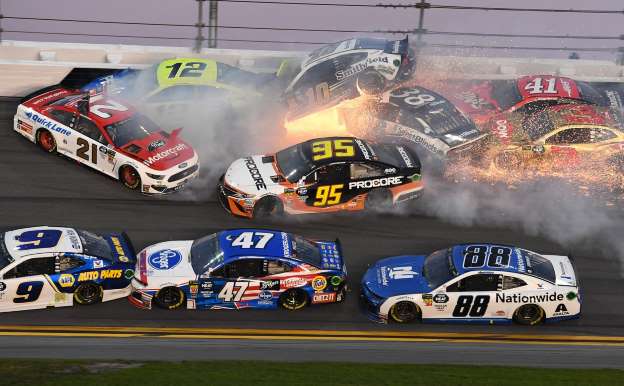 Major pileup with just ten laps to go at the Daytona 500, later won by Denny Hamlin.

This was DiBenedetto maiden run in the Daytona 500, and he had done very well before the chaotic pileup claimed the rest of his laps. Menard tried to explain what happened when he left the care center on the track infield.

“I’m not really sure what happened.” I hooked the 95. I was trying to get to his outside, and he was kind of in the middle and he went to the outside and was going back and forth. The 12 (Ryan Blaney) had a big run, so I jumped up in front of him and hooked the 95.I’ll take the blame for that one, I guess. I had a really fast Ford, but I sped on pit road and got us behind. We had to play catch-up. We had a shot there at the end though. It was time to go. It’s frustrating that we have to put ourselves in that position to race this way. I tried backing off but wrecked a lot of cars.”

There was enough action at Daytona for a month of races, but this was just the first in a long season of racing. The Monster Energy NASCAR Cup series moves to Atlanta this Sunday for the Folds of Honor QuikTrip 500. Fox TV has the coverage, beginning at 2 pm Eastern.