Home » Style & Creativity » History of Textiles: How did they become such an integral part of our lives?

Textiles are everywhere. We wear them, we hold them, we wash them, we see them nearly everywhere we go. But what do we really know about the thing that has become such an integral part of our life? How did textiles come to be and what is their history? “Textiles” as a word derived from the French term texere and the Latin term textilis, which both mean “to weave.” Though it initially only referred to woven fabrics, as time went on and creating fabrics by more and more methods became prevalent. “Textiles” broadened and now encompasses all fabrics.

The history of textiles dates back to prehistoric times. Textiles uses were creating nets and baskets, made from threads and flexible reeds or other similar materials. While examples of prehistoric textiles are rare, the earliest evidence of textiles is of basket weaving from approximately 5000 BCE. The history of textiles as clothing is mysterious still, though it has been assumed that the earliest form of clothing was animal skins used to protect the wearer from the weather. Or, there are those who propose that clothing was used for reasons such as cult, magic, or prestige.

Carpets, towels, and rugs created in the early Middle Ages by tribes across Turkey, while fine muslins created in Mughal India. In Sicily, weavers in Palermo began interlacing silk with gold. In England, mainly linen and wool were used until silks were imported in 1455. 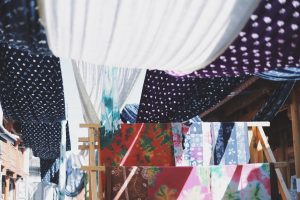 Fast forward to present day textiles, the textile industry has become an integral part of life. Technology has developed since the initial creation of textiles and enabled scientists to create novel, man-made fibers and manufacturers to make textiles easier and in larger quantities. With that, the apparel industry has grown because of it.

Clothing throughout history was made for more practical, simple uses until textiles became more widely made and easier to make. As fabrics became more interesting, more beautiful, more inventive, and apparel followed suit. Nowadays, because of the incredible resources we have, clothing can be made from a myriad of different fibers in any design. Fashion designers all over the world test the limits of textiles and push design to places never seen before.

So why is it that textiles have become such an integral part of our lives? Though clothing began as practical and protective, clothing has become so much more. The foundation is to cover our bodies and protect them from weather mainly, but the “second layer” if you will, has developed its own new definition of what clothing is. Clothing is now a way to express oneself, much like how art is an expression of the artist who creates it. The style of clothing, the color of the fabrics, the arrangement of each and every outfit a person wears speaks to who they are.

You Are What You Wear

From prehistoric times to modern times, textiles have evolved from natural limited resources to an extensive array of all types of fibers used for different purposes. The development of textiles allowed us to not only protect ourselves physically but also to protect ourselves emotionally. By expressing ourselves through our outer appearance, we are sharing with the world who we are. Hiding who we never end well and no one should feel that they cannot be themselves.

California Versus New York: Two States in the Fight Against Covid-19