Before humans knew very much about how the animal kingdom worked, we would look at lions, tigers, and other big cats, and wonder how they all came to be. Medieval bestiaries, which are illustrated collections of different species – included a range of theories and even mythic animals like the unicorn and dragon. One of those mythic animals is the pard.

While the pard appears in Medieval source, its earliest reference is actually from Natural History, which Pliny the Elder composed as far back as 77 A.D. According to him, the pard has a twisted nature, and will find a lioness to mate with, rather than staying within his own kind. Their offspring is a leopard, which makes sense when you think about it, since “leo” means “lion.” “Pard” comes from “pardus,” which means “mottled.” If the lion smells the pard on his mate, he will kill them both, and refuse to mate ever again. 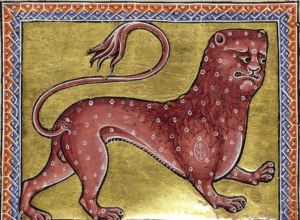 Medieval illustration of the pard

The authors Medieval bestiaries took an interest in the pard. There are many illustrations and descriptions of them. The pard is fierce, troublesome, and fast, their lips curled in a snarl. Their physical appearance varies from book to book, but they always seem to have spots. In Bestiary, which dates to the 13th century, those spots begin to hold important spiritual meaning. According to the author, the pard represents the devil or a sinner who is “spotted with crimes.” When the Antichrist appears, he will be known as a pard.

This spiritual association with an animal is typical for Medieval bestiaries. Every animal doesn’t only get a history and physical description; they get a rundown of the sins or virtues they represent. Because of the inclusion of species like unicorns – which represent Christ – and pards, some scholars believe that Medieval people didn’t actually believe these creatures existed. The bestiaries were a chance to drive home a value system, and if it required an imaginary animal, so be it.

Animals like the pard, infused with meaning, could then be used by those who wanted to send a strong message. The bastard offspring of the pard – the leopard – was used on heraldry to let everyone know that the bearer was the product of adultery. Richard the Lionheart had not one, but three gold leopards on his arms at one point, which could have been meant to represent his grandfather, William the Conqueror, or “The Bastard.” 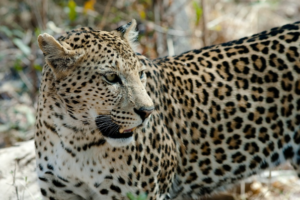 A leopard, supposedly the child of a lion and pard

If “the pard” sounds familiar to you and you aren’t an expert in Medieval bestiaries or heralds, this shifty cat has appeared in a lot of literature. In As You Like It, by William Shakespeare, he describes a soldier as “bearded like a pard,” while much later in 1819, Keats says Bacchus rides a chariot drawn by pards. The cat even appears in Tolkien, along with real animals like tigers. The pards in Middle-Earth lived in woods, and would hide in trees and leap on their prey. In 1962, Tolkien published a poem called “Cat,” which indicates he took inspiration from the the medieval bestiaries housed at Oxford.

Learn more about imaginary animals people may or may have not believed were real.