In the real world, fans follow sports like basketball, soccer, and baseball, and while those can often be found in novels and movies, there are also totally fictional sports. These break all the rules, sometimes the rule of gravity. Since many of them result in murder, they should not be attempted outside of their source material.

When the stars of Battlestar Galactica aren’t fighting for survival in a war against androids, they might blow off some steam by playing a game of “Pyramid.” No one episode explains all the rules, but the sport appears to be a blend of basketball, rugby, and even a little baseball. It’s played on a triangular court with either teams or one-on-one. In the world of the TV show, it’s an ancient game. The goal is to get a ball through a small hole, a feat which requires both strength and smarts. Spectators are usually rowdy and drunk. 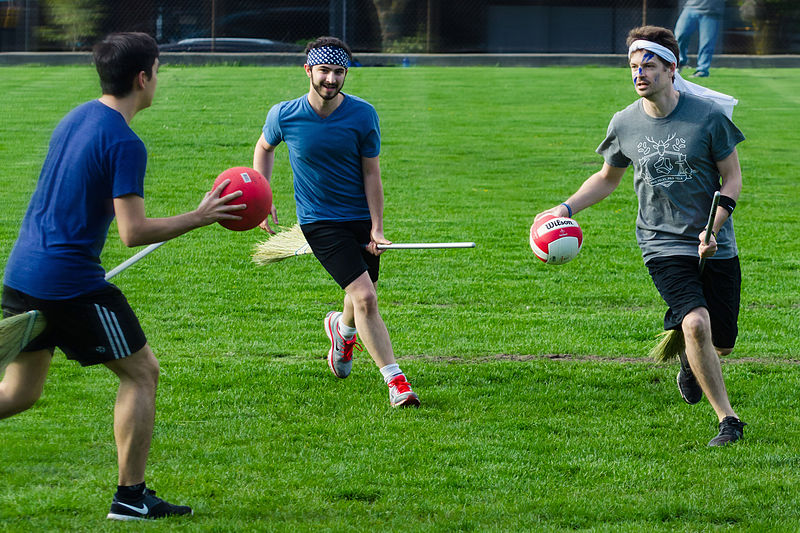 One of the most iconic sports in all of pop culture, quidditch is played with seven players: one keeper, one seeker, two beaters, and three chasers.

One of the most iconic sports in all of pop culture, quidditch is played with seven players: one keeper, one seeker, two beaters, and three chasers. Each position has a specific job. The chasers need to keep possession of the “quaffle” and score by hurling it through one of the opposing team’s three hoops. The seeker has one job – capture the golden snitch, an enchanted sphere that flies around the field very quickly, with occasional stops. If the seeker catches the snitch, their team gets 30 points and the game ends immediately. Harry Potter plays a seeker. Whoever has the most points at this time wins the match. As for the keeper and beaters, they try to distract the chasers and defend the hoops. Everyone flies around on broomsticks. In the world of Harry Potter, quidditch plays a key role in several of the books.

In this 1970’s sci-fi film, powerful corporations rule the world. They’ve suppressed all violence, except in the rollerball arena. Two teams work to get a 50-pound steel ball into their opponent’s goal. How do they get around? Half of a team is on roller skates, while the other half rides on motorcycles. The bikers help the skaters move faster. Many collisions ensue, and thanks to the players wearing spikes on their leather gloves, much blood spills. Murder is encouraged.

In a dystopic future, the ruling elite hold an event every year where children from twelve poor districts all come to the Capitol. These kids are trained and paraded around in the hopes of earning a sponsor who can send them supplies once the games begin. They are then set loose within a controlled environment to fight to the death. Most die within the first day. This brutal sport is very similar to the gladiator fights of ancient Rome, where participants had very little choice and just tried to stay alive. In the book and film series, the Capitol established the Hunger Games to punish the districts for a rebellion in the past.

With a handful of films, the first released in 1975, the Death Race series explores a world where prison inmates are forced to drive in a deadly car race in exchange for their freedom. In the original, the government, which has instituted martial law, organizes it to keep the population entertained, while in the 2008 version, an amoral prison warden gets rich by broadcasting the race. Racers earn points by being as violent as possible, like running over pedestrians and killing each other.