Rainforest on Fire: The Tipping Point for Climate Change?

It could be a page-turning and best-selling fictional thriller. There are intrigues and political machinations. Bloviating pols all sound and fury signifying nothing, accompanied by a crescendo of crackling flames eating up the last, best hope for mankind. Guillermo Del Toro, James Cameron, and Brian De Palma could vie for the movie rights. “Forest Inferno,” or “Heat Unleashed.” What a rush, except of course, that the Amazon on fire is real and could have real consequences for this, and future, generations. Gildshire was interested, then concerned, and now alarmed. Here is what we know about the cause, the extent, and the future of the Amazon rainforest on fire.

“…all you can see is death.”” Those are the chilling words used by Rosana Villar of Greenpeace as she flew over a small portion of the devastation. She was talking about the fire, of course, but also about the humans and animals perishing in the blazes raging across Brazil’s rainforest regions. The state of Rondonia, 91,000 square miles, and with a population of about 1.7 million people, has 6,436 fires burning so far this year.

It is because Rondonia is one of the forefront battlegrounds over deforestation. NASA observed this year that the state has become one of the most deforested states in the Amazon. This juxtaposition of development over the environment, and climate change galloping out of control has led, in part, to the fires. But, it has also led to wrangling and conflict between national leaders. Brazilian President Jair Bolsonaro and French President Emmanuel Macron exchanged heated words…no pun intended.

Why are they in conflict?

Macron, who just hosted the G7 Economic Summit, offered $22 million to help fight the Amazon fires. Bolsonaro turned down the help and accused the G7 nations of imperialism and colonialism. The Brazilian President went on to say that his country could fight the fires without help from the outside. He also said he would consider accepting aid from the world if President Macron first apologized personally to him for slights.

To fight fire is one thing, but to subdue it is another matter. Earlier this week, Bolsonaro committed military planes to help quell the flames, but the firefighters are still losing ground to the fire.

This is terrible for Brazil, but you said something about climate change. 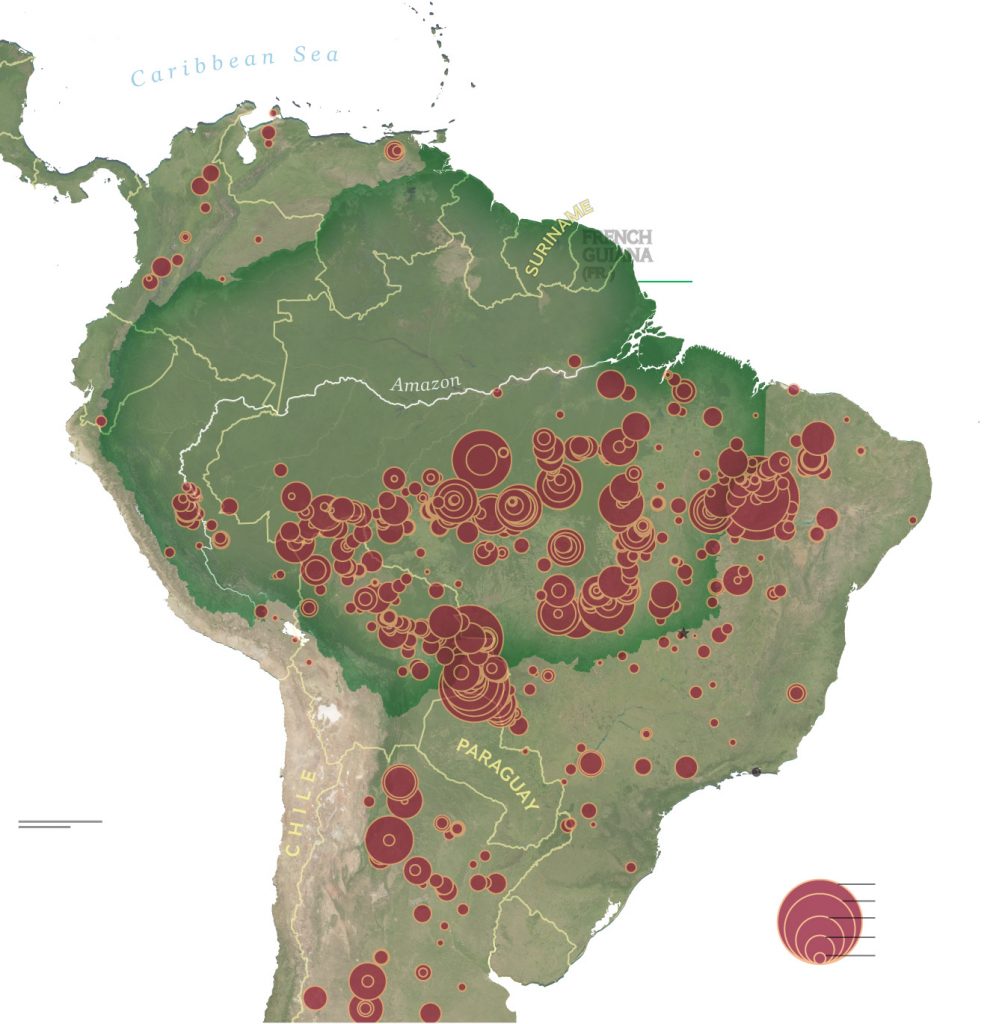 Computer model of satellite images showing the extent of the rainforest on fire.

Indeed. Fifteen percent of the Earth’s water is under and around the Amazon rainforest. As that water evaporates and is consumed by the fires, the water’s cooling properties aren’t in play to combat rising global temperatures. The more forest is burned, either by fire or deforestation…

Which leads to more fires.

Now, you’re getting it!

Is there any reason for hope? You make it sound like there isn’t.

At this point, it is hard to see a silver lining through the smoke and childish hubris of grown men who should know better. Maybe, the fires will bring the world together to combat this global crisis. Perhaps, real changes will come in our own country as it wakes up to the alarm bells the Earth herself is ringing.

One can only hope.

Actually, one can act to hold leaders accountable for the legislative decisions they make. One can reduce waste in their own lives. One can strive to model being a good human so that others might follow their lead. Because the Amazon rainforest is on fire, and it won’t be the last place to spark up. We’re all in this together, even if it, at times, seems as though we are not.

What Happens to Your Brain When You Binge-Watch?