Japan loves fruit. People will pay hundreds and even thousands of dollars for gifts of “luxury” fruit. Not all fruit is that pricey, however, but there are some kinds that are exclusive (or almost exclusive) to Japan. Here’s some of the most unique Japanese fruit to consider trying:

Native to the northern part of Tohoku, the akebi grew uncultivated for years and years. It’s recognizable thanks to its striking purple color. Cultivation began about two decades ago, and you’ll most likely see the fruit sold in high-end grocery stores. Traditionally, people mixed the fruit with salt or pickled cucumber to bring out the sweetness, because on its own, akebi isn’t sweet. It can even taste bitter if you chew the seeds. The flesh is similar to lychee, but softer. The pod of the fruit can be eaten, as well. It’s often stuffed and fried as a tempura.

This unique Japanese fruit was randomly discovered in 1820 and quickly became popular. It might be a natural hybrid of a pomelo and yuzu, and it’s classified as a type of mandarin orange. While it looks a bit like a lemon, it’s much sweeter, though it’s still usually eaten with sugar because of its sourness. You can also cut it up into salads or drizzle with soy sauce. Unlike many fruits, you actually want to eat the hyuganatsu’s pith because it is a bit sweeter than the flesh.

Developed in 1972, the dekopon looks like your standard orange. However, it’s a hybrid between two kinds of mandarin oranges and it’s both larger and sweeter than regular citrus. Dekopons grow in greenhouses and are harvested in the winter between December and February. The fruit then “rests” for 20-40 days so the levels of citric acid go down and the fruit becomes sweeter. Only fruit that meet a certain standard can legally be sold as “dekopon.” In the US, dekopons are actually sold as “sumo oranges,” and they’re much pricier than your run-of-the-mill citrus.

Okayama, the capital city of Okayama Prefecture in Japan, is famous for its white peaches. The city has even claimed folk legend Momotarou, or “Peach Boy,” as its unofficial mascot. The cultivation of peaches began in 1875 when peaches arrived from China. Today, Okayama is one of Japan’s largest main peach producers. The Shizumu white peach is arguably the most famous. Nicknamed “the queen of peaches,” the Shizumu possesses a soft, juicy texture and delicate creamy color with just a slight kiss of pink. When they hit the markets, these peaches sell quickly and often given as gifts. 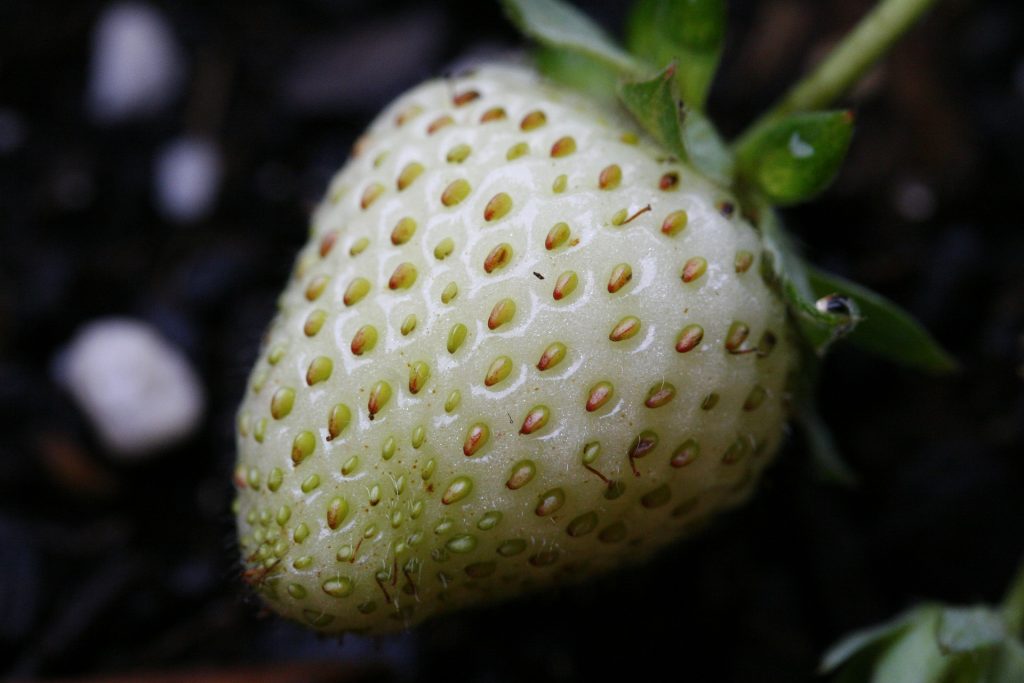 White strawberries need to stay out of the sun

Created in 2013 by Yasuhito Teshima, the White Jewel strawberry is truly a unique Japanese fruit. This white strawberry is the result of years of work and special growing techniques. It needs reduced exposure to sunlight, so the chemical that would give it a red color is significantly reduced. Even then, a mere 10% of the White Jewels actually stay white, and most of these have small patches of red or pink. The taste is similar to a pineapple and much sweeter than a regular red strawberry. Because so few are cultivated, they can sell for as much as $10 a pop. Considering just one Bijinhime strawberry can sell for almost $500, $10 is a pretty good deal.

Many types of fruit are a result of cross-breeding and careful planning. Genetic engineering could also create all kinds of new fruits and vegetables.