Unrivaled in its beauty and spectacular state of preservation, Angkor Wat is described, quite literally, as ‘heaven on earth. ‘With an impressiveness akin to that of the Great Pyramids and an artistic distinctiveness as beautiful as that of the Taj Mahal, the incredible temple complex earns its place as one of the Seven Wonders of the World.

This awe-inspiring structure lies at the heart of the Angkor Archaeological Park, which covers 154 square miles and contains scores of other Khmer temples dating from between the 9th and 15th centuries. Representing one of the most astonishing and enduring architectural achievements in history, the temples were built by the Khmer civilization’s King Suryavarman II between 802 and 1220 ADas a miniature replica of the universe in stone and an earthly model of the cosmic world.

The central tower rises from the center of the monument to symbolize the mythical mountain, Meru, the Mount Olympus of the Hindu faith and the abode of ancient gods, then thought to be the center of the universe, while its five magnificent towers represent the towering peaks of Meru. The outer wall corresponds to the mountains at the edge of the world, and the surrounding moat the oceans beyond. Created to be the perfect fusion of creative ambition and spiritual devotion, the perfect composition, balance, proportions, and sculptures of the ‘temple that is a city’ make it one of the finest monuments in the world. 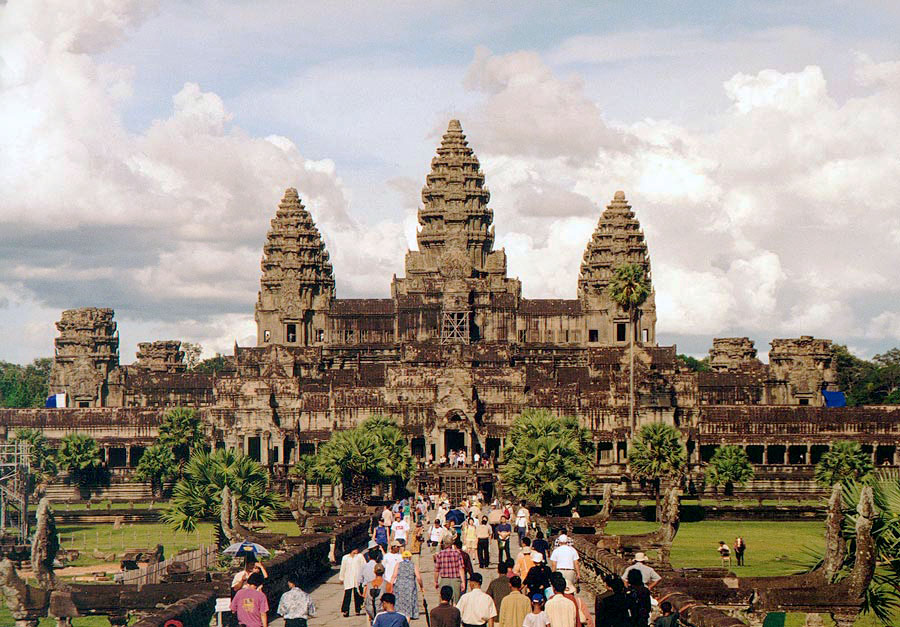 The city of Angkor became a pilgrimage destination of importance throughout South-East Asia during the 500 years of Khmer occupation, however, after being sacked by the Thais in 1431 and abandoned in 1432, the temple city was forgotten. Buddhist monks wandering through the dense jungles occasionally came upon the incredible ruins, and invented fables about the mystical sanctuaries, saying they had been built by the gods in a far ancient time. Centuries passed, stories became legends, and pilgrims from the distant reaches of Asia sought out the mystic city of the gods.

A few adventurous European travelers knew of the ruins except for tales of a strange city lost in the jungles, until the French explorer Henri Mouhot discovered Angkor in 1860. The French people were enchanted with the ancient city and beginning in 1908 conducted an extensive restoration project, which has continuedto present day revealing hundreds of structures that formed the core ofan ancient empire. Stretching from Burma to Vietnam, this empire boasted a population of one million people at its zenith.

Prepare for divine inspiration! Orientated to the west, which is symbolically the direction of death, the grand Pantheon is thought to have served both as a temple and as a mausoleum for the king. Access to the complex is through the west gate, where you will cross the 190m-wide moat on a sandstone causeway to enter this ethereal world.

Famous for its beguiling apsaras (heavenly nymphs), figures of Hindu mythology in the form of beautiful dancing girls, more than 3000 unique figurines are carved into the walls of the compound in exquisite detail and are well worth a closer look. Two types of females are represented here – Apsaras and Devatas – the former are always poised and ready to dance, while the latter stands still, and face forward in their role as temple guardians. It is said that during the Angkor period the King would take different goddesses to bed each night, with thousands of them living around the temples at his disposal.

Notable attractions include Ta Prohm, which is the only temple to have been left as it was found and has taken over by the jungle, the Hall of Echoes, which is famous for its resonant caverns, and Bakan, the summit of Angkor Wat’s central temple, which boasts breath-taking views of the Cambodian countryside.

While the sleepy, rural town of Siem Reap has found its place on the tourist map due to Angkor Wat, the little town has a good range of accommodation and several excellent restaurants to offer.

The cream of the crop, however,would have to be the Raffles Grand d’Angkor, which combines old-world grandeur with peace and tranquillityin the heart of the Old French Quarter. Embraced by beautifully landscaped French gardens, the legendaryhotel is a luxurious retreat with elegant rooms, a beautiful swimming pool, and luxurious spa.

Fly to Siem Reap from Phnom Penh or Bangkok, or why not arrive in style on a languid river cruise from Saigon down the Mekong River? There there are daily boats and buses going to and from the city to various locales or make your way into Siem Reap overland from Thailand via the Aranyaprathet/Poipet border crossing.

Outdoor Music Venues at Which You Must See a Concert!

The Most Influential Television Shows of All Time