“Slava’s Snowshow” is a Broadway Sensation

I’m tired. I’m not just tired from lack of sleep or overwork. Nor, am I tired from a hard workout or a game of street football (“Cut left behind the blue Chevy, and I’ll hit you.”) No, I’m tired of the news of the day, because it is exhausting. It is safe to say, in a non-partisan way, that I am not alone in being tired. So, send in the clowns, and plenty of them! “Slava’s Snowshow” is an interactive delight, with a message for kids from 1-93, and is one of the most highly-anticipated shows to hit the Great White Way this season. Gildshire’s Lev Radin was there for the show and there for the snow.

First, allow me to interject a personal note. I don’t care for clowns, though I have known a few and found them to be delightful sans makeup. But, the whole clown thing leaves me cold…normally.

“But this is different?”

“Slava’s Snowshow” explodes all of that in a sea of fun and goodwill. Are all of the clowns happy and joyful? Are all of the clowns that come into the audience in a merry state of mind? No, but if the clown that asks for your hand is less than ecstatic, the reaction he/she evokes is one of sympathy, empathy, and goodwill. Because “Slava’s Snowshow” is magic clowns on a magical ride into your heart.

It is also off one of the truly most successful international tours that any show has ever experienced. Tony Award-nominated “Slava’s Snowshow is created by Slava Polunin, who has redefined the ancient art of clowning with a poignantly poetic approach to the performances his clowns create. Polunin drew from his experiences as a small boy in a small central-Russian town and learned the art of observation (something too few people really know how to achieve). It was this gift that allowed him to create what can only be described as magic. 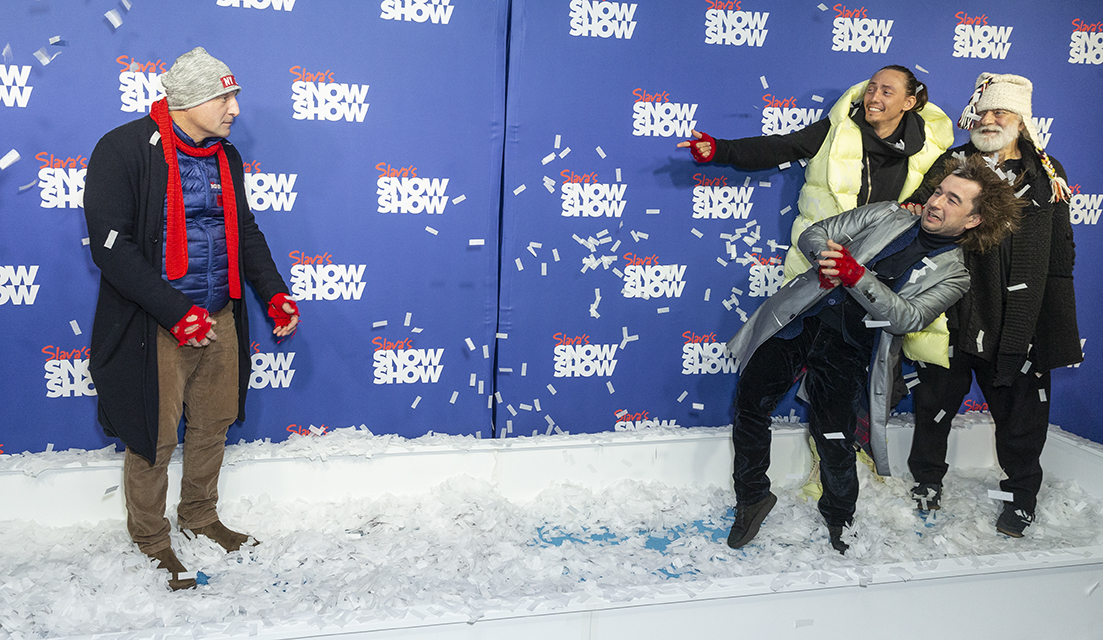 Awarded more than twenty international theater awards, “Slava’s Snowshow” debuted a decade and a half ago. Since then it has garnered an Olivier Award for Best Entertainment, as well as a Drama Desk Award here in the States. Even the hard to please New York Times has said about it “My heart leaped. Snowshow induces waves of giggles and sighs of pleasure.”

“High praise indeed, but what happens during the show?”

Clowns by the carful. More clowns than you have ever seen in one place, doing the most delightful things you have ever seen done. It unleashes a breathtaking artistic thrill ride for all ages and languages, even though it is set in an absurd and surrealistic world. It’s hard to explain, but “Slava’s Snowshow” bridges the gaps the audience has with one another, showing us that there is more we have in common than that which separates us.

And this is done with clowns?

No, it is done BY clowns, as well as dreamy and exotic sets and snow. Lots of snow. One has to see it to believe it. “Slava’s Snowshow” is that good, and is appearing at the Stephen Sondheim Theatre

Upcoming Movie Spinoffs Where The Villain Is The Star