We all know the pirate ditty, “Yo ho ho, and a bottle of rum!” While a fictional song written by Robert Louis Stevenson for Treasure Island, pirates did indeed drink quite a bit of rum, which is not exactly one of the more nutritional foods to eat. The reason why and other stories about rum weave an interesting tale about sugar, slavery, and politics. 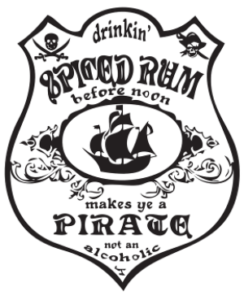 The creation of rum

What is rum exactly? It’s an alcohol distilled from sugar. Traditionally, that sugar came from sugarcane, which the Persians and Arabs refined. They were the ones to introduce sugar to the Mediterranean, and eventually Europe. To cultivate the sugarcane, most nations turned to slavery. After finding that sugarcane could grow in the Canary Islands and surrounding areas, the Portuguese sent Africans there to work the mills and plantations. By 1500, Portugal exported the most sugar. However, moving sugar by ship was expensive. 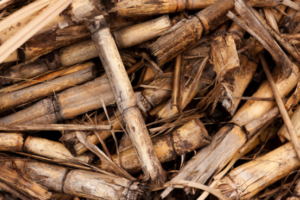 During the process of distilling, sugar crystals are extracted from the sugarcane syrup, leaving behind thick molasses. Fermenting the molasses creates rum. The process might have been created by slaves, who would have distilled fermented molasses into alcohol. Moving rum instead of sugar was more affordable. Pirates trolling trade routes would come upon the ships carrying huge barrels and drink up.

In the 1700’s, colonists in North America also loved rum. One person could consume as much as 3.7 gallons per year and it was a common gift. George Washington gave voters 50 gallons of rum punch when running for a seat in Virginia. However, the colonies faced withdrawal when King George III made it illegal for colonies to import it. In 1771, two years before the Boston Tea Party, a group stole molasses seized at the port. As time passed, however, whisky distillers became more popular and rum fell out of fashion, though it still remained popular.

There are seven main types of rum: white, gold, aged, dark, spiced, rhum agricole, and cachaca. If you’ve ever had a tropical drink at a bar, they probably used white rum. It has the lightest flavor and ages 3-6 months. Gold rums are a bit older, but generally taste the same. Aged rums, however, spent 2-10 years stored in a cask. They are gold in color, but have a much more complex taste than a gold rum. 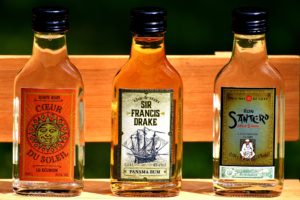 Dark rum, which should be sipped, is created through a double distillation. For an even darker brew known as blackstrap, a third distillation can be applied. Spiced or flavored rum is very popular and includes ingredients like coconut or cinnamon. Rhum agricole, which is made from sugar cane juice instead of molasses, only comes from the French Caribbean. Producers stick to strict standards. Exclusive to Brazil, cachaca is also made from sugar cane. It has less strict rules than in the French Caribbean, but must be less than 54% alcohol by volume. It’s considered the sweetest.

If you’re underage or not a drinker, try making bananas foster! It combines bananas, one of the most nutritional foods to eat, with butter, brown sugar, and rum. Cook butter, brown sugar, and some cinnamon in a hot pan, then add sliced bananas. Once they’ve softened and are browning nicely, pour in dark rum. By tipping the pan a little, the alcohol should catch fire. The rum burns off, often in a spectacular display, leaving behind the flavor without the alcohol. Serve over cold vanilla ice cream.

When drinking, keep in mind that dark rum can produce really bad hangovers. How do other liquors stack up? Click here to read about the connection between booze and emotion.