Sticky and black, vegemite is made from yeast extract and has a salty, bitter taste similar to soy sauce, beer, and malt. If that doesn’t sound appealing to you, you are probably not Australian, where people can’t get enough of the stuff. It’s been called as symbolic of the island continent as koalas. 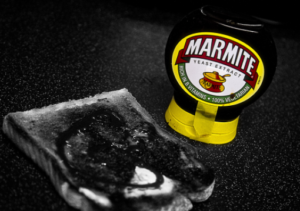 Vegemite’s creation originates with Marmite, another yeasty spread that came from England in the early 20th century. Australia loved it, but during WWI, imports were disrupted. To give Australians their fix, Cyril P. Callister developed an alternative for a company that would eventually be purchased by Kraft. With brewer’s yeast, Callister made a sticky sandwich spread with ingredients like salt, onion, and celery. The full list is kept secret. Two years later, 1924, the company held a contest to name the condiment and “vegemite” was chosen.

Vegemite became extremely popular, and its health benefits became a big deal. In 1939, the British Medical Association officially endorsed it. It has high concentrations of B vitamins, so that during WWII, soldiers were given vegemite in their rations. For those not fighting, rations were strict, so it became patriotic to go without for a time.

After the war, the craze didn’t slow down. While we recognize the expression “as American as apple pie,” Australians could easily use use the spread for their national food. In 2007, prime minister candidate Kevin Rudd labeled himself “a very simple Vegemite-on-toast man.” He won. For years, vegemite was actually owned by Kraft, which is an American company. In January of 2017, it came back home after Bega Cheese bought the brand for $460 million. 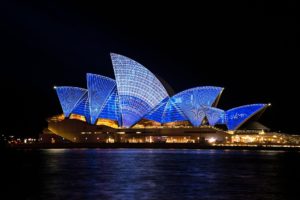 One of Bega’s new ideas was to make vegemite a bit more upscale. Translation: more expensive. Called Vegemite Blend 17, the spread is closer to the original recipe and more a syrup than a spread. It costs $7 Australian, which is twice what a normal jar would be, and only 450,000 jars were made. No word yet on if Bega will keep the artisanal vegemite around.

Over 22 million jars of vegemite are made every year, but not all of them are being used for toast. According to the Indigenous Affairs Minister (Nigel Scullion), vegemite is being used to make alcohol in indigenous communities where booze bans are in place. This is of serious concern, because alcoholism afflicts those communities at much higher numbers than others. However, as soon as the word “ban” is so much as whispered, people freak out.

Banning vegemite probably wouldn’t fix the problem, anyway. There’s no active yeast in vegemite, so bootleg brewers would just find another ingredient to make alcohol with, like fruit or anything else with sugar in it. There’s also the issue of freedom of choice, because while vegemite has been banned in prisons due to inmates making booze, it’s a different story when politicians are talking about free citizens.

Spreading vegemite on toast – not making alcohol from it – is the most common way of eating the spread, along with a layer of margarine or butter. Some people like only a small scrape, while others love the stuff so much, they’ll eat it out of the jar. Another  sandwich is made from buttered bread, the yeast spread, and cheese. It’s definitely an acquired taste, and most Americans who have tasted it (like former President Barack Obama), really don’t like it. If you’re curious, you can buy a tube on Amazon for about $10.

Another food that may require an acquired taste? Cheese tea.

House of Wax: The Story of Marie Tussaud