The Oreo is one of the most popular cookies in the world. With its sweet creme between two chocolate wafers, it’s also one of the most simple. The story of the Oreo actually begins with the story of another cookie, and it only gets stranger from there.

In the 1870’s, Jacob Loose started a dry-goods business in his home state of Kansas, and found success. In 1882, he bought a biscuit-and-candy company with his brother, Joseph. Together, they became the Loose-Wiles Biscuit Company, after partnering with John Wiles. Eight years later, a large group of bakers joined to become the American Biscuit & Manufacturing Company. The purpose? To compete with two other large conglomerates. In 1898, the American Biscuit and its main rival, The New York Biscuit Company, joined forces and became Nabisco. 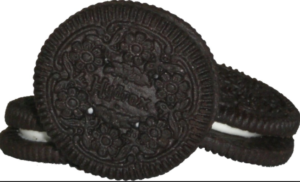 Jacob wasn’t pleased. By 1902, he had divested entirely from Nabisco, and struck out on his own, using the name “Sunshine Biscuits,” though it wasn’t formerly filed. In 1908, the company launched what would become their signature product: the Hydrox cookie. A chocolate-sandwich filled with slightly-sweet creme, the name was chosen as a combo of the words “hydrogen” and “oxygen,” the molecules that make up water. Sunshine wanted the name because it meant “purity and goodness.”

Weird name aside, Hydrox was a huge hit. Grocery stores ordered cases by the ton. The design was iconic was well, with a scalloped edge, detailed flowers with seven petals, and laurel wreath. The cookie was known as “the King of Biscuits.” Nabisco had its work cut out for them. Their response? Mimic the cookie.

In 1912, the Oreo cookie launched. Nabisco wasn’t subtle about imitating Hydrox. The Oreo even had a similar design with a laurel wreath. Customers were loyal to Hydrox, however, and grocery stores tried to sell the cookie by linking them to other Nabisco products. It was the name, however, that ultimately took down Hydrox. 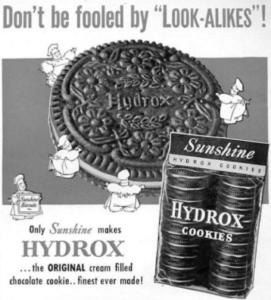 If you thought Hydrox sounded like a chemical, you aren’t alone. Many cleaning products actually used that name, and Sunshine Biscuits sued to try and get them to stop. The Hydrox ads were also strangely aggressive, and beginning in 1915, the company made a big deal of Hydrox being “the first,” “the original,” and telling customers they shouldn’t be “fooled by the look-alikes!” Customers don’t like being bullied, and yelling “First!” instead of explaining why you make a better cookie isn’t effective either. Oreo gradually became more and more successful, so that by 1999, Sunshine made the decision to discontinue Hydrox.

Hydrox’s story doesn’t end here, however, as they were bought and re-launched by Leaf Brands in 2015. A lifelong fan remembered Hydrox from his childhood, and wanted to save the cookie. The recipe is now made with real sugar and no GMOs. They are also less sweet and have a crunchier cookie.  As for Oreo, while they were originally made with pork fat, they’ve since become kosher and vegan.

Today, Oreo cookies sell by the hundreds of millions. In 2017, America bought over 670 million Oreos. And that doesn’t count the international sales. While the classic chocolate-cookie-vanilla-creme is the most popular, Oreo actually makes dozens of flavors. In the US, those flavors include Cookie Dough, Limeade, Root Beer Float, and Pumpkin Spice. Internationally, you can find more unusual ones like Green Tea Ice Cream and Orange & Mango in China. In May of this year, Americans will get limited editions flavors like Cherry Cola and Pina Colada.

Another iconic treat is the s’more. What’s the story behind it?

The Story of S’mores

Is Tom Brady’s TB12 At All Legitimate?

Gourmet Food We Discovered in Canada