In 2013, an organization held a contest to pick the ugliest animal in the world. The goal was to raise awareness about protecting animals that don’t make it on nature shows because they aren’t conventionally-attractive. The winner? A fish whose official name is “the blobfish.” 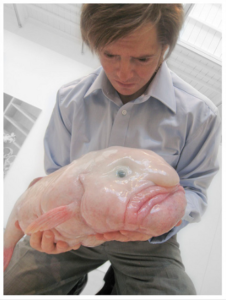 Not Mr. Blobby, but they look the same

Described by the National Oceanic and Atmospheric Administration as a “mass of pale, jelly-like flesh,” the blobfish first gained the world’s attention in 2003, when researchers caught one by accident off the coast of New Zealand. Amazed by the fish’s humorous face, the scientists took a picture and put it online, naming him Mr. Blobby. Obviously, Mr. Blobby did not survive his trip up from the deep waters he called home, so he was preserved in alcohol and can be seen at the Australian Museum. The blobfish – specifically as Mr. Blobby appears in his photo – has appeared in pop culture, even making an appearance in Men in Black III and a recent X-Files episode. In an SNL skit featuring mermaids, Kate McKinnon’s character is 85% blobfish.

What else is there to know? The fish actually only looks the way it does in photos because it’s been brought up from very deep waters between 2,000 and 4,000 feet deep. Down there, the pressure can be 120 times greater than at sea level. This gives the jelly-like blobfish more structure, so when it gets trawled up out of the sea, it becomes flat and mushed.

Another unusual thing about this fish is that it doesn’t have a swim bladder. Swim bladders allow most fish to float, but because of the amount of pressure in very deep water, a blobfish’s bladder would explode. Instead, its mushy flesh allows it just float above the sea floor. There, the 12-inch long or shorter fish bobs around, mouth open, eating whatever swims by. A typical meal includes crabs, sea urchins, and mollusks.

The blobfish as it appears in deep water

The blobfish belongs to the Psychrolutidae fish family, which includes other humorously-named creatures like the blob sculpin. Like its Australian relative, this fish lives in very deep water. It’s relatively unusual for fish to protect their young (they’re not all good parents like Nemo’s dad Marlin), but the blob sculpin guard their eggs before they hatch. We don’t know anything about the blobfish’s reproductive cycle, as they live so deep.

If you are dying to see a real life blobfish, the Aquamarine Fukushima in Japan got one in 2017, after it became caught in a net by accident. Named “Bob,” the blobfish is cared for by senior aquarist Koji Matsuzaki, who keeps the water temperature just 2-degrees with very little lighting. While this makes Bob tricky to see, it mimics the fish’s natural environment, so it’s better for him. Bob is shy, anyway, and usually spends all his time under a rock. Matsuzaki explains that when people see Bob, they often say they expected him to be uglier. He bears little resemblance to Mr. Blobby, and has even grown a spiny stubble in place of scales.

Blobfish cannot be eaten – they’re not poisonous, but apparently bad-tasting – and cannot be kept as pets, either. No info on how the Japanese aquarium imitates the pressure of the deep ocean could be found, but home aquariums certainly aren’t equipped to provide that for blobfish. Contrary to what many sites will tell you and what the whole ugly-animal contest was about in the first place, the blobfish is actually not endangered and so doesn’t need “saving.” When asked about the fish’s status, the scientist who caught Mr. Blobby said it’s “a stretch” to believe that blobfish are endangered because of deep-sea trawling. There simply aren’t enough trawlers. That was in 2015, however, and plastic pollution and climate change certainly threaten all fish species, but for now, this squishy fish is not on the brink of extinction.

This fish can get you high, but don’t try it – the trip is terrifying.