Shhh, come closer. Gildshire needs to tell you something that many people do not know. The Oregon coast just might be the country’s best-kept summer road trip secret. Oh, we know about Oregon’s legendary rainfall. After all, the state’s best football team, by far, is the “Ducks.” But, we also know that Oregon’s coastline is relatively rain-free from the last half of June through the first half of October. That’s the magical time in this magical place. Heck, the real “Bill Murray on the golf course in ‘Caddyshack’ Oregon rainfall doesn’t begin until November.

“Oregon has over 400 miles of coastline. So where can I go? What is there to see? In other words, what’s fun?”

Here is where we come in. You can relax, and let someone who has been on the Oregon coast’s every side road help out. We’ll enjoy this trip together. First off, did you know that the Oregon coast actually starts in California? 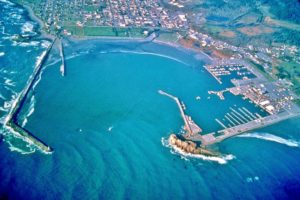 An aerial shot tells us how Crescent City got its name.

Crescent City, California, to be exact. From its aesthetics to its attitude Crescent City ought to be the first Oregon town, instead of the last California town. We start the journey with clam chowder or fish and chips at The Chart Room. The splendid view is just our first of many over the next few days. After lunch, we’re away! The legendary Highway 101 hums under our tires as we head northbound. In about 25 minutes we’re in Oregon as the map understands Oregon. 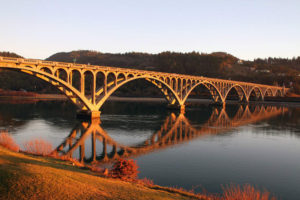 An Oregon Coast sunset casts its beams on the bridge entering Gold Beach from the north.

Gold Beach
Our first extended sighting of the Pacific Ocean is from Gold Beach. Did we mention “hidden gem?” All year long, the actual ocean shore at Gold Beach is uncrowded. Slip on a light jacket (The Oregon coast’s cool summer temps are part of its charm) and watch the sun drop into the sea. The town of Gold Beach was so named for the 1853 gold strike, but we choose to believe another story. When the setting sun strikes the light-tan sand it takes on a hue that gleams golden. 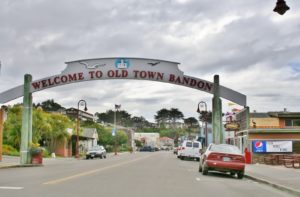 Bandon
We enjoy the Pacific as it plays hide-and-seek alongside us until our arrival in Bandon. That’s the name most people know it by, but we like its official name. “Bandon-by-the-Sea.” By either name, it is a coastal gem. We follow the signs toward Bandon Beach Loop Drive. We’ll get out and breathe the moist clean air that so signifies this part of the country. While in Bandon, we want to stop for some sweet tooth satisfaction. Sourced from the nearby bogs, Bandon’s cranberry candy is a unique treat. 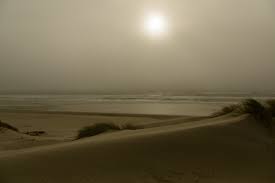 Sunset peeks through the fog near Florence.

The geographic center of Oregon, at least as measured on Hwy. 101. Charming Florence is blessed by the lushness of the surrounding rainforest. While here, we visit sand dunes stretching for miles. In Florence, we stroll through picturesque Old Town, where fishing boats go up and down the Siuslaw River. 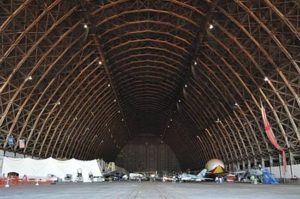 Inside the cavernous Tillamook Air Museum.

Positioned about seven miles inland, the town of Tillamook experiences slightly warmer temperatures than do her sister towns hard up against the surf. In Tillamook, we sample locally made cheeses and ice creams before our visit to the Tillamook Air Museum. Thirty or more perfectly restored and vintage planes are here. These include the 1938 Bellanca Aero Cruiser, the P-38 Lightning, and the P-51 Mustang.

Cannon Beach
Ask any frequent visitor about Cannon Beach and they will back us up. Four out of five visitors who’ve spent any time at all in this town would like to retire here. The picturesque downtown, museums, restaurants, and many art galleries leave a lasting impression. Just off the beach is Haystack Rock, arguably the most photographed monolith on the west coast. But, Haystack Rock is more than a pretty picture. It is a winter haven for dozens of puffins that nest in its crevasses. Cannon Beach is a quiet and quaint little town, so contrast it with our next stop. 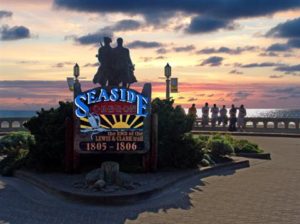 The Lewis and Clark statue in Seaside, Oregon

Seaside
This town Be-Bops! In fact, there is a burger joint here by that very name! Catering to tourists from Seattle to northern California, downtown Seaside reminds us of Santa Cruz’s Beach Boardwalk. Did you like quiet Cannon Beach? I’ll wager my paycheck to your dollar that your kids will call Seaside their favorite on the Oregon coast. It has way more hotel rooms (reserve early for summertime) than a town this size would usually need. But, it is that popular. We’ll stay within earshot of the pounding surf at one of several oceanfront hotels or motels. Before we leave, though, history earned its due. The turnaround at the end of Broadway in Seaside was the spot where Lewis and Clark’s Corps of Discovery expedition ended. Stop there and remove your hat in honor of the people who lost their lives guiding America across the continent. 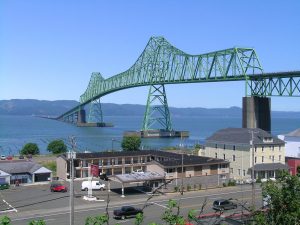 Our Oregon coast trip ends in Astoria, but the Evergreen state of Washington is on the other side of the Columbia River Bridge.

Astoria
Little Hollywood is along the Oregon coast. We bet you never knew that, but several moviemakers put Astoria, Oregon in the lenses they made with their hands. They liked that the Columbia River Bridge looks like it disappears in the fog on its way from Oregon to Washington. What movies, you ask? Goonies and Short Circuit were filmed in and near Astoria. Richard Gere was both an Officer and a Gentleman to Debra Winger near here.

How about a fun brunch before we take our leave? Both Astoria and Seaside feature Pig ‘N Pancake restaurants. They’ll serve bottomless coffee as we choose between simple and elegant pancake creations. P ‘N P is one of our lasting traditions on a trip we have made many times.

Leave Astoria eastbound on Highway 30 (or leave Seaside on Highway 26) toward Portland. That’s where we’ll find the six-lane freeway that’ll have us into California six short hours from now. The interstate is great for fast and efficient travel. But these aren’t the best six hours of the trip. Any 360 minutes on highway 101 and the Oregon coast are the best six hours. Now that you’ve visited, does it own you, too? Gildshire thought so.