Iceland is one of the few places on earth that looks like the set of a fantasy movie. Defined by dramatic landscapes like hot springs, lava fields, volcanoes, geysers, and glaciers, exploring Iceland is a once-in-a-lifetime experience. Visiting Icelandic ice caves is one of the most popular activities. Elemental events like glacial melting and lava flows create these caves and they’re always changing. From season to season, ice caves disappear while others take their place.

This means most ice caves can only be visited during the winter. In summer, the caves begin to melt and become dangerous. In winter, you should always go with a trained guide. They know when a cave is safe or not, and tours are often cancelled at short notice because of the weather. If possible, though, you should try to visit an ice cave if you’re in Iceland. Here are some of the best:

Langjökull is Iceland’s second-largest glacier. In its cave, you can see ash on the ceiling. There are also man-made tunnels from the natural cave, which have been used for Secret Solstice Festival concerts. There’s a chapel carved into the cave, as well, with wooden benches. According to Extreme Iceland, the chapel can be booked for weddings! Tour guides take visitors to this ice cave by monster truck. Explorations last about 1 hour. 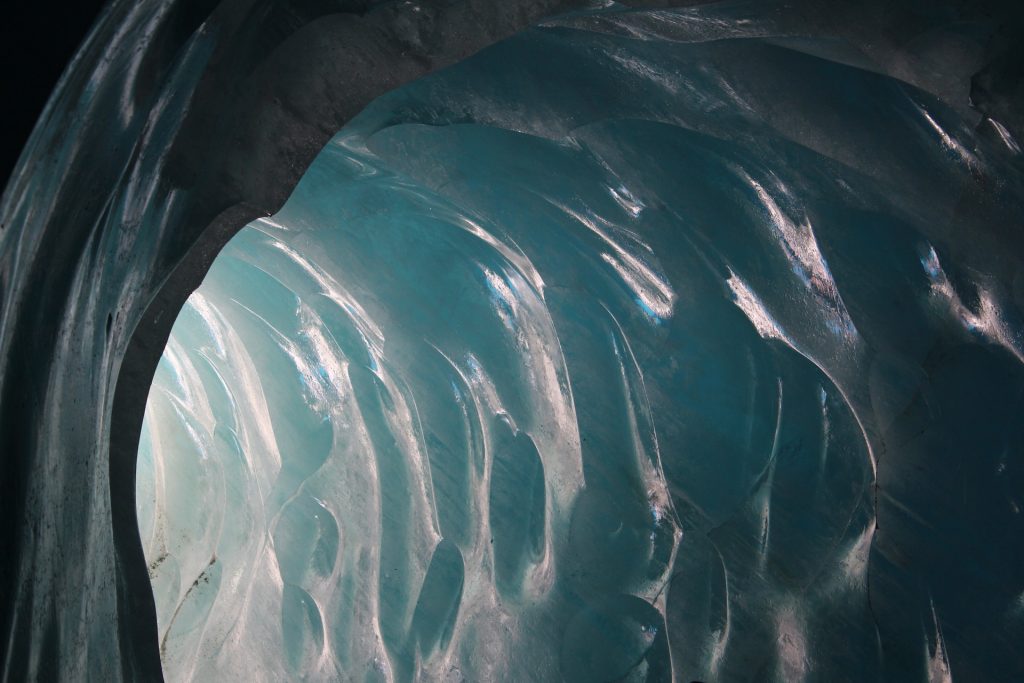 The Eyjabakkajökull glacier is at the East Highlands of Iceland. The landscape consists of wetlands and it’s one of the most wild areas of the island nation. Visiting Icelandic ice caves in this glacier can only be done during the winter and accessed by super jeep or another tough car. Because the ice caves are remote, there will likely be fewer visitors. The pictures you take will be one-of-a-kind, as well, due to the ever-changing nature of ice caves.

This glacier can be found at the edge of Skaftafell National park, which is best enjoyed over a few days. The ice caves can only be visited in winter, and many tours will include a glacier walk after guests have explored a cave and tunnels. If you want to experience a handful of Icelandic landmarks on your trip, Skaftafell is a great place to go. In addition to ice caves and glacier walks, you can see the waterfall Svartifoss,  hike around a valley, and climb the Kristinartindar mountain.

You can actually visit this cave in the summer, so if that’s when you plan your trip, don’t give up all hope on seeing Icelandic ice caves. The ride to the cave is beautiful because it’s volcanic; it’s a mix of green mountains and lava sand. After the car drive, it’s a fairly-quick walk to the glacier and cave. Instead of blue ice, which is common in photos of ice caves, the ice in Katla is black. That’s because of the volcanic ash. Expect some tight spots in this cave, as well as waterfalls.

Found at Vatnajökull National Park, the Breiðamerkurjökull ice cave, also known as the Crystal Cave, is arguably the most famous ice cave in the country. It’s famous for the clarity of its ice, which in photos appears a brilliant blue. The light shining through the ice is a breathtaking experience. Tours like the one with Arctic Adventures consist of a ride by jeep from a glacier lagoon, a hike to the cave, and cave exploration for 30-45 minutes.

If you love exploring caves, there are other types that don’t all involve ice. Here are some of the most beautiful caves in the world.

Why Incompetent People Tend to Think They are Great?