Home » Travel & Nature » Autumn Leaves: Where are the Best Trips to See Them?

The National Weather Service tells us that we are in store for another week of unseasonably hot temperatures. They didn’t need to tell me. I can see it in your parched lips. I can feel it in the way you ask for a yard and a half of room in bed. It is obvious by how you held the ice cream guy at gunpoint so you could put your head in his freezer. Yes, it has been a hot one when it hasn’t been washing Texas into the Gulf of Mexico. (Thoughts and prayers for those good folks.) In light of the oven-like temperatures, Gildshire Magazines has a simple question. Who is ready for the fall? Just so you know that autumn is really going to come, we put together the best changing autumn leaves mini-trips for you to consider. Can you almost taste the cider?

San Francisco, California: Already you’re surprised. We’re willing to bet you thought every place on our list would be New England. While your northeastern instincts are wise ones, the autumn leaves change in many places other than Vermont. 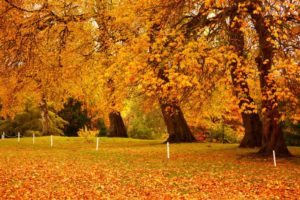 Golden Gate Park bursts with color during the season of changing autumn leaves.

San Francisco’s Golden Gate Park has one of the best leaf shows in the country, walking distance from a Ghirardelli hot fudge sundae.

Peak season for fall color in San Francisco is late in the fall. The mild weather in September and October holds the green for a good long time. Perhaps that is why you didn’t think of it as a good place for a leaf trip. Residents of The City By the Bay know that they don’t have to catch a plane for fall color to make them catch their breath.

Skyline Drive, Virginia:  This is more than a fall color trip. Rated by The active Times as a road trip we must take before we die, it is over 100 miles of lush scenery. Mid-late October, though, is when the color show turns to the orange and scarlet.

Smack in the middle of Shenandoah National Park, Skyline Drive is a Mecca for hikers and campers, as well as leaf-viewers and day-trippers. Start at Simmons Gap to the south and drive to Chester Gap up north. At the end of the day, there will be no gap in your knowledge of autumn leaves in the Mid-Atlantic.

Skyline Drive is no secret to the folks who ride bikes (motorized and otherwise) in the Blue Ridge and Smoky Mountain regions. We recommend you join them in the knowledge they have harbored for years.

Montpelier, Vermont: You knew we couldn’t ignore New England forever and Montpelier has long been one of our favorite little cities in the world. Be prepared, though, for the activity level exhibited by the locals. Montpelier is hikers, bikers, backpackers, and runners. Think Red Rocks in Colorado without the rocks. 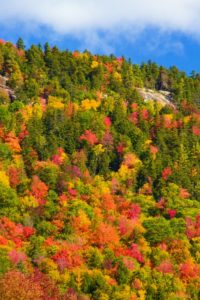 The mountain behind the Vermont State Capitol building in Montpelier.

The smallest state capital in the country, Montpelier is a picture postcard of a town with the diversity one would expect from it being a seat of government. A true hidden gem, it is a place to consider living if snow doesn’t scare you inside all winter.

Travel there early in the season, because peak autumn leaf color is found in mid-September and the trees are starting to show a little color as we speak! Autumn comes early to this part of the world, and everyone should see it come at least once.

*Trivia note* Montpelier is the only state capital in the country without a McDonald’s in the city limits. Come to this glorious place and fill up on clean air, fresh water, snowy winters, and fall color. All better for you than a Quarterpounder with Cheese could ever be.

Nashville, Tennessee: On a list of things for which Nashville is known, autumn leaves would be well down the page. After all, they call it Music City U.S.A. with nary a country music mention about the grandeur of the golden leaf. 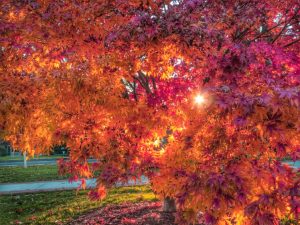 This tree in downtown Nashville nearly shouts its beauty to the world.

That’s a pity because Nashville is a fine place to go for an autumn leaves trip. Another late-season showpiece, Nashville comes to full fall fruition around Halloween. Reds are the prominent color around here, and that is true for wine as well as leaves.

So put on those boots and go for a walk in the park. The pointed toes of the cowboy boot are fantastic for kicking fallen leaves high into the air.

That’s our list. Between San Francisco, Nashville, Skyline Drive and Montpelier, 90% of you are within a day’s drive. Make your plans today, and thank us when you get home.