The Greatest Road Trip continues its trip through pioneer country with today’s journey to and through the state of Wyoming. The trip out here has been a refreshing change from the more urban outings we took back east. We love them all but for wide, wide open spaces, we can’t beat the intermountain west.

Wyoming continues the pattern begun in Idaho and continuing in Montana. Namely, lots of land and not too many folks. Wyoming takes that pattern to its most extreme. It is the tenth largest state in the Union and has the fewest people. At 5.97 people per square mile, there is a good chance your nearest neighbor is over the horizon. Good thing too. There’s something about the look in his eye… 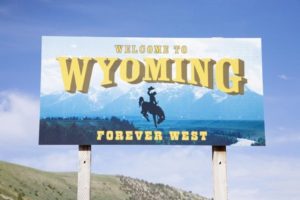 We kid, because in reality Wyoming has some of the most hospitable folks we have found so far. Wyomingites love their state like a Mama loves her baby, and they are glad to tell you why.

Wyoming is that square state right under Montana, not to be mistaken with the square state (Colorado) right under Wyoming. Boy, surveyors didn’t mess around out here. “Is it square? Good, we’re outta here.” Wyoming is bordered by Montana on the north and Colorado on most of the south. Utah is to the southwest, while Idaho handles the border to the west. The Dakotas  share the eastern border.

Congress admitted Wyoming into the Union in 1890 as the 44th state. Unlike so many states surrounding Wyoming, Statehood here was achieved without much controversy. Wyoming was the first state in the Union to recognize women’s suffrage and the first one to elect females into statewide office, begetting the motto, “The Equality State.” 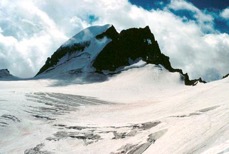 The highest point in Wyoming is atop Gannett Peak, which rides the Continental Divide in western Wyoming. The lowest point (still over 3,000 feet above sea level) is found on the Belle Fourche River near the South Dakota border. The geographic center of Wyoming is in Fremont County, a few miles southeast of Shoshoni. Wyoming is in the Mountain Time Zone and recognizes Daylight Savings Time.

Gillette-Campbell County serves over 30,000 flyers a year, and Casper-Natrona County International greets almost 90,000 passengers annually. Jackson Hole Airport sends a quarter million passengers a year on their way. Denver is the most common destination for all three airports.

Butch Cassidy and the Sundance Kid (1969)

Weird and Wonderful Facts About Wyoming:

Though West Virginia is renowned for its coal culture, the largest coal mine in the USA is Black Thunder located near Wright, Wyoming.

The JCPenney stores were started in Kemmerer.

Wyoming is credited with the invention of “dude.” The first dude ranch was established at the Eaton Ranch, near Wolf.

The bucking horse on the Wyoming license plate (and UW football helmet) was a real horse. His name was “Old Steamboat.” The picture shows a cowboy atop him, but he was never successfully ridden.

The majority of Yellowstone Park lies within the boundaries of Wyoming.

The Red Desert in south-central Wyoming doesn’t drain. The continental divide splits and goes around the desert on all sides, leaving evaporation as the only exit.

Let’s take a Trip Through Wyoming:

Saddle up, we’re going to take three days (or maybe four) and traverse this marvelous piece of God’s country from west to east. 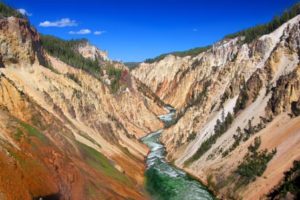 Yellowstone National Park! Just let the words roll off your tongue. The vast (nearly 3,500-sq.-mile) wilderness park is a recreation area atop a volcanic hot spot! The Greatest Road Trip Ever Taken is claiming it for Wyoming, but it spreads into parts of Montana and Idaho too. Yellowstone is probably the signature site of President Theodore Roosevelt’s vision. That’s because it features dramatic canyons, alpine rivers, lush forests, hot springs and gushing geysers. It’s also home to hundreds of animal species, including bears, wolves, bison, elk, and antelope.

We are going to start our trip through this state near Madison. This is where the idea of a National Park System was first discussed. We’re going to put a line in the Madison River and show off our fly-fishing skills. “A River Runs Through It” was filmed not far from here. It will be a grand and peaceful day whether we catch anything or not.

This afternoon we will continue the Yellowstone Grand Loop to the most famous geyser in the world. “Old Faithful” makes itself known about every 91 minutes with a hot water show for the ages. We plan to spend about three hours here because we want to see the geyser from a couple of different vantage points. First, from the benches placed 300 feet away. Then we will climb the observation hill for a different look. Finally, we want to hike the four-mile boardwalk loop to see some of the other thermal features. We’ll end our day in the gift shop and at the Roosevelt Roughrider Cabin. We made reservations for our $91 room over a year ago.

The next morning, we are off to see the Grand Canyon of Yellowstone. At 24 miles long, 1,200 feet deep, and nearly a full mile across, many say that it rivals that “other” grand canyon. We will drive down to Artist Point to see the canyon in its panoramic splendor and from multiple scenic lookouts 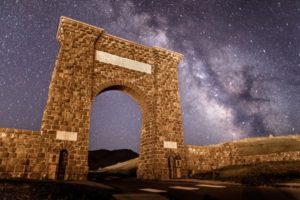 We want to finish our tour of Yellowstone at Roosevelt Arch. Unchanged from the day President Roosevelt placed the cornerstone, it bears the legend “For the Benefit and Enjoyment of the People.” It marks the northern terminus of Yellowstone and is a fitting end to our tour.

(Yes, we know we are technically in Montana now. Get over it!)

We will drive through the Grand Tetons on our way east. For pure grandeur, the Tetons are perhaps more impressive than Yellowstone, without quite the scope. Either place is a magnificent destination. 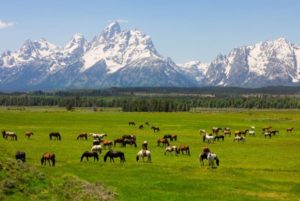 Continuing the theme of the Old West, we will next stop at Historic Trails West, in the town of Mills. It is here we will ride in a real wagon train! The four-hour guided tour teaches us about the history, lore, and fables of the area. At the end, we will have a dutch oven dinner and spend the night in trail cabins. The whole thing costs $165 per adult and $145 per child. That’s a lot of money, but the experience is one that will never be forgotten. 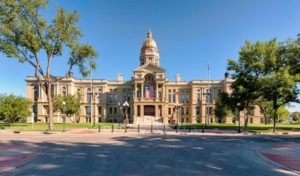 We will complete our trip through Wyoming in Cheyenne. Though it is the capital of Wyoming, Cheyenne (pop. 55,000) retains much of its small-town Western roots. We will enjoy the architecture from the days when the trans-continental railroad passed through on its way to the coast.

We try not to highlight things that are too time-sensitive on our trips. So, we won’t spend a long time on Frontier Days. However, for a county or state fair experience, Frontier Days (end of June-4th of July) should be on your traveler’s bucket list.

Instead, we’re going to take the popular Street Railway Trolley tour It is a hop-on, hop off attraction that is led by guides truly excited to share Cheyenne with us. We will learn history, folk tale, and architecture. The best way to handle the trolley is by staying on the whole time, then walking to the highlights. Most of the attractions are within 8-10 blocks of the station.

We close the tour with a night at the Radisson Hotel, Cheyenne. It is a good value at $93 a night. We hope you enjoyed this trip through one of the nation’s most unspoiled places.