In 1875, farmers looked on in horror as swarms of rattling, gnawing locusts chewed their way through crops across Minnesota, Colorado, Kansas, Nebraska, and Missouri. It was the largest swarm in history, totaling nearly 2,000 miles. Why did this happen? 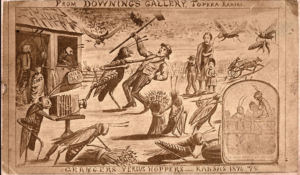 Artist’s rendition of the locust swarm in 1875

The first thing you need to know is how grasshoppers and locusts are connected. Short-horned grasshoppers are usually solitary and relatively calm. However, when there’s a lot of growth in their food source after a period of drought, their population swells. A study at Oxford showed that their brains actually change, and their serotonin levels go up. Within just hours, their behavior changes. They begin to breed faster and start to migrate in search of food. They clump together as wingless nymphs, and then once their wings grow, they fly off in large numbers. Now as locusts, the insects can fly great distances, devouring everything in their path.

That’s what happened in the 1870’s. Having eaten everything in their usual area, the locusts flew to Kansas and Nebraska. In 1874, the states were hit hard. Farmers dreaded the spring of 1875, when new nymphs would hatch. They were right to be worried. When the hatching season came, locusts numbered in the trillions.

Farmers could only watch as locusts decimated their crops. Once those were gone, the insects began eating clothes hanging on the line, horse blankets, fence posts, gloves, and leather. In an attempt to fight back, some people released their chickens and domestic birds into the fields, but the animals literally ate themselves to death. In 1877, Nebraska passed a law that required anyone between 16 and 60 years of age to spend two days a week killing locusts before they hatched. There were also rewards: for every bushel of locusts produced, farmers could earn $1. Families that had been hit especially hard often depended on that income to survive.

In the 1880’s, society adapted. They switched to crops they could grow in the winter – like wheat – which was ready to harvest before locust season. Within 30 years of their appearance, the locust that had been named the Rocky Mountain locust, vanished.  In 2014, they were declared officially extinct, though they had not been seen since that terrifying 19th-century swarm.

Why did they disappear? Researchers aren’t sure. Theories suggest that urban development and effects like increased flooding due to lower beaver populations destroyed locust breeding grounds. Fewer grasshoppers hatched, and so their swarming behaviors never developed. Eventually, they just died out completely. 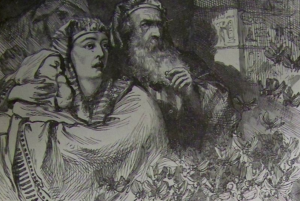 1890 illustration of the Biblical plague of locusts

Other species have caused problems. The desert locust, which lives in places like North Africa and the Middle East, swarmed in 2003 and 2004. They hit Mali, the Sudan, and other countries first, before moving north. The insects ended up destroying $2.5 billion worth of crops.

Was the desert locust the kind from the Biblical plagues? Quite possibly. Locusts appear in ancient Egyptian art, and the other plagues of disease make sense considering how huge piles of dead locusts attract illness-carrying rats. The Quran mentions locust plagues, too. In China during the 9th century, locust swarms were enough of a problem that the government appointed anti-locust officers. While North America hasn’t experienced a locust swarm in many years, the insects have remained a serious problem in other countries.

The Colorado Potato Bug is another much-feared pest with a history of destruction. Read about the role it played in the Cold War.

All Toyota Models to Be Offered as Electric by 2025