Raise your hand if you like to travel to exciting places. Yessir, 100% of us. Everyone likes to go, but they like it even more if the “go” comes with rewards, freebies, perks, and swag. That’s why Gildshire is confounded with what we see and hear at hotel registration desks. Guests come in, check in, and say “No” when invited to join the hotel rewards program. Why would you do that? The programs are free and some of them offer on-the-spot perks or upgrades! As always, we are here to help. Today, we look at some of the best hotel rewards programs, as well as some that offer less than optimal value. We’re ranking them based on ease of earning points, as well as ease of redemption. Finally, we factored in the frequency of bonuses and special offers.  Here now, in reverse order, Gildshire’s U.S.-based hotel loyalty program recommendations.

8th Place, Club Carlson: Also doing business as The Raddison Group, Country Inn and Suites, and others. Carlson did okay in some of our criteria. It was mid-pack in perks. However, in the all-important ease of earning and redeeming points category, Carlson ranked sixth. Combine that with the second-lowest score in “rooms available” and Club Carlson fares not so well.

7th Place, IHG Rewards: Also doing business as Holiday Inn, Staybridge, Candlewood Suites, and others. Earning and redeeming points, people! That’s what these programs are supposed to be all about. Unfortunately, IHG came in second-last in that category. Too bad, because its “perks” score was top of the chart.

6th Place, Hilton Rewards: Also doing business as DoubleTree, Homewood Suites, Ritz-Carlton, and others. We expected better from Conrad Hilton and the gang. For years, Hilton was the gold standard for lodging excellence. However, their hotel loyalty program ranked just under average. What tripped them up? The same low score in earning and redeeming points that plagued IHG. However, if you travel to cities that have Hilton-branded properties, and most major cities do, and love Hilton like no other, then their perks are top shelf. You just have to stay a bunch of times to earn points worth redeeming.

5th Place, Best Western Rewards: Also doing business as Surestay, and others. Ah, the workhorse hotel chain for the American middle class since the 60s. For decades the friendly crown logo greeted the family as they hopped out of the station wagon. The logo has changed, but the hotel loyalty program brings the family back again and again. Is it the best program? No, but it is the most well-known, and it isn’t bad, ranking midway on our list. What does B/W do well? They have the second-most economical lodging options in the industry. What do they not do so well? They really don’t offer much in the way of perks.

4th Place, Starwood Preferred Guest: Also doing business as St. Regis, Westin, W Hotels, and others. SPG is a good program, made so by its score in the category of collecting and redeeming points. Finally, one that gets it! In fact, SPG ranked second, only behind our Grand Champion, in that category. However, SPG was third-last in the number of rooms available.

3rd Place, Choice Rewards: Also doing business as Comfort Suites, Quality Inn, Rodeway, and others. There are a lot of Choice Hotels out there, and many of them are economically-priced and with good value for the price. In fact, Choice is champion in the number of economy rooms available. It also tied in perks. All in all, a solid choice for a place to earn and spend hotel loyalty points. Only a few chains make it easier.

2nd Place, World of Hyatt: Also doing business as Andaz, The Unbound Collection, and others. Oh, you haven’t heard of Andaz or the Unbound Collection? Yes, that is the only thing that kept Hyatt from competing harder for the top spot. Otherwise, their program is great! They have a nice selection of economically-priced hotels and the ease of earning and redeeming points is second only to…well, you’re about to find out. If you are already a member of WOH, congratulations. You are a discerning traveler. 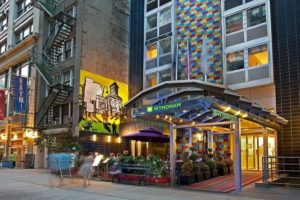 The best hotel loyalty program in the industry.

Grand Champion, Wyndham Rewards: Also doing business as Days Inn, Baymont Inn & Suites, Microtel Inn & Suites, Super 8, Travelodge, and others. Lots of others. In fact, the incredible spread of hotels across the land and across the price continuum is a reason Wyndham is the winner. However, the bigger reason is the ease of collecting and redeeming rewards. What makes their program different? Well, in other hotel loyalty programs, free night value is based on how much you spent on the nights in which you paid. In other words, a collection of $75 nights at a Best Western will earn a $75 night. Not so, with Wyndham. Once you hit the free-night threshold, you can spend it at the most luxurious hotel in their family! That’s  a major factor in what makes this one our Grand Champion.

Did that help you navigate the waters of hotel loyalty programs? We hope so, but there is an over-arching takeaway. Wherever you stay, join the club! Every program has value, and every program will, in the long run, be beneficial to you as you travel. Now, go pack!

Is 2018 the Year Cable Companies Have Dreaded?

Martha’s Vineyard: A Vacation of Elegance and Tradition

Coolest Casino Bars in the World

Spots to Visit on Your Next Trip To...

How to Enjoy Colorado in Summer