Featured in movies like the James Bond flick Octopussy, Faberge eggs embody wealth and luxury. Though other Faberges exist, the most famous come by way of the Russian tsars. Each egg is unique and contains a “surprise,” though many of those tiny pieces are now missing. Why were these eggs crafted and where are they now? 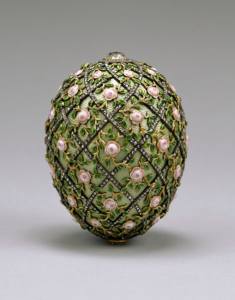 1907 Rose Trellis egg, which can be seen at the Walters Art Museum

In 1885, Tsar Alexander III asked jeweller Peter Carl Faberge to create a gold egg for the tsarina. That first egg – the Hen egg – is made from gold with an white enameled shell hiding a gold yolk, which itself contained a multicolored gold hen. One layer further, and the tsarina found a tiny diamond replica of the imperial crown with a ruby pendant. She fell in love with her egg, and so the Tsar placed a standing order for a new one every Easter. When Alexander died, Tsar Nicholas II kept up the tradition, giving both his mother and wife Alexandra an egg. Faberge crafted 50, and then disaster struck the Russian monarchy.

The eggs are lost

In 1917, the Russian people revolted, and the Bolsheviks slaughtered the royal family in 1918. The Faberge eggs were sent to the Armoury Palace at the Kremlin. At least one of them, the Necessaire Egg, traveled around and was last seen in 1952 by a London firm to “A Stranger.” It remains unaccounted for.

In 1927, Stalin sold many of the eggs, and between 1930 and 1933, 14 eggs left Russia. Many of them were sold to Armand Hammer (actor Armie Hammer’s great-grandfather) and a London antiques dealer. In the chaos of the Soviet Union and its eventual dissolution, a handful of the eggs disappeared. 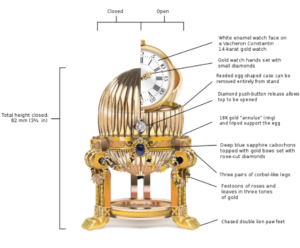 The mystery of the missing eggs fascinates many people, including Geza von Habsburg, a leader expert. He and his wife, Anna, spend hours every week following up on clues as to the locations of eggs like the Necessaire Egg and Cherub with Chariot. Their search became the stuff of legend in 2014.

10 years before in 2004, an American bought an egg-shaped ornament for $14,000 at a jumble sale. He planned on selling it to scrap metals and make a profit off the materials, but discovered he overestimated the worth of it parts. The egg hung out in his kitchen for years, until he decided to do a little research. He performed a google search of the name he found engraved on the tiny clock inside the egg, and a 2011 article popped up: Faberge egg-hunters were searching for the Third Imperial Egg. Its worth? $33 million. It sold to a private collector for an undisclosed amount. It was probably more than $14k.

The most luxurious egg in the world

What’s the most expensive Faberge egg? The one that cost the most to create is the Winter Egg, which cost 24,700 rubles in 1913. The frosty shell is studded with over 1,500 diamonds, and when opened, it originally contained a tiny basket made from gold and platinum. The whole egg stands just over 4-inches high. In 2002, it sold for $9.6 million.

In 2004, the Coronation Egg sold with eight other Faberge eggs. The 1897 Coronation, one of the most famous eggs, is modeled after the Empress’ gold and yellow-green coronation robe. In a documentary in 2013, the buyer revealed he paid over $100 for the nine eggs.

In 2015, Faberge created a new “Imperial Class” egg. Crusted with 139 pearls, mother-of-pearl, and precious crystals, it took 20 artisans to craft it. It includes a new mechanism that lets the egg’s outer shell open into six sections, like a blooming flower. Inside lies a rare gray pearl from the Arabian Gulf. It’s valued at $2 million. Watch it open here.