“The underground economy.” You’ve heard whispers about it, but you’ve never really known what it is. As it turns out, the underground economy is commerce done under the radar of the United States fiscal engine. Monday, May 14, 2018, might turn out to be the day that a certain portion of the underground economy came to the surface. That was the day the Supremes struck down the federal law prohibiting U.S-based sports gambling, and online sports magazines are all over it. What does this mean going forward? Gildshire unpacks the ruling, answers some questions we’ve been asked and makes some bet…er, prognostications. 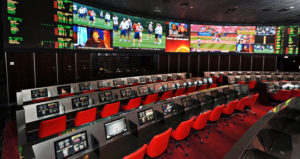 Monday’s ruling by the Supremes opens the door to a room like this, near you.

How do you know that? Because sports betting already takes place. On every game imaginable. Remember, this ruling has to do with U.S.-based sports gambling. Offshore sportsbooks have been operating for years. They work out of foreign countries (Antigua and Costa Rica are two common ones.) accepting deposits and making payouts in U.S. currency. A couple of clicks on a site like bovada.lv and you’re all set.

I had no idea. So, how much money changes hands through offshore sportsbooks. The American Gaming Association estimates that Americans wager about $150 billion on sports each year.

So, what will this ruling change? It will change a lot! There are already 32 states with plans in place to offer sports wagering. For the states, it will mean another revenue stream through taxation. For bettors, it will mean doing business with American interests and eliminating the need for middlemen (think Western Union) and high withdrawal fees.

How much is the withdrawal fee from an offshore book? It varies, but $75.00 is pretty typical.

You mentioned 32 states have plans to offer legalized sports betting, but you didn’t say which ones they are. New Jersey plans to be first. That only makes sense, because New Jersey brought the suit on which the Supremes ruled. Delaware, Mississippi, New York, Pennsylvania and West Virginia are among the states expected to quickly get into the legal bookmaking game.

Okay, that’s six… Expect most of the northeastern states to take part, joined by scattered states across the Midwest. The west coast will see legal sports wagering, as well.

How about California? According to a news release issued just today, and posted by the Sacramento Bee “California could soon legalize sports betting, following a decision Monday by the U.S. Supreme Court to overturn a federal law that outlawed the practice. Gildshire’s headquarters are in California. Our sources here believe “could” becomes “will” fairly quickly.

How, exactly is this going to work? Initially, we expect brick and mortar establishments will take wagers. In other words, if there is a casino near your town expect a sportsbook to soon be a part of it.

So, I can’t place bets on my smartphone? Notice, we said “initially.” When this new world order gets fully rolled out, mobile betting applications will be as common as Candy Crush.

This sounds pretty exciting! Do you have a timeline? If I were a betting man I would say this is a drag race to September 6.

What is special about 9/6? That’s when the National Football League gets underway and it is the big dog in the sports betting landscape. Sure, there are people who bet on cricket matches in New Zealand (we call those folks degenerates, but we mean it in the nicest possible way,) but the NFL will draw huge crowds to your local casino/sportsbook.

Is there any pushback from the sports leagues? Surprisingly little. In fact, the National Basketball Association, led by Commissioner Adam Silver, is embracing the idea. After all, what makes a Nov 21st game between the Kings and Pelicans more exciting? Having a few bucks on the outcome, of course. Other sports are taking the news about the Supremes ruling a bit more cautiously.

Can I count on Gildshire to keep me posted as developments take place? You bet (pun intended). All of the online sports magazines will monitor the progress.

Maybe, but Gildshire is my favorite. Awwww….