Kanye West? President Yeezy? Has it Come to This?

Home » Our World » Kanye West? President Yeezy? Has it Come to This?

Gildshire may not know much, but we know this. Every U.S. President from 1-44 is on his ear today. Kanye West announced in a tweet (how else?) that he is running for the Presidency of the United States. Just let that settle in for a minute.

Wait! West and Trump are cozied up!

West was formerly cozied up to the President. In fact, he famously donned a Make America Great hat as recently as April. Now, he claims that day as a kind of testosterone rush moment. West explained it this way.

He said donning the MAGA cap “made me feel like Superman. That’s my favorite superhero. You made a Superman cape for me.”

But, without a look down on what happens to people who first embrace then reject Trump, West has joined the electoral fray. 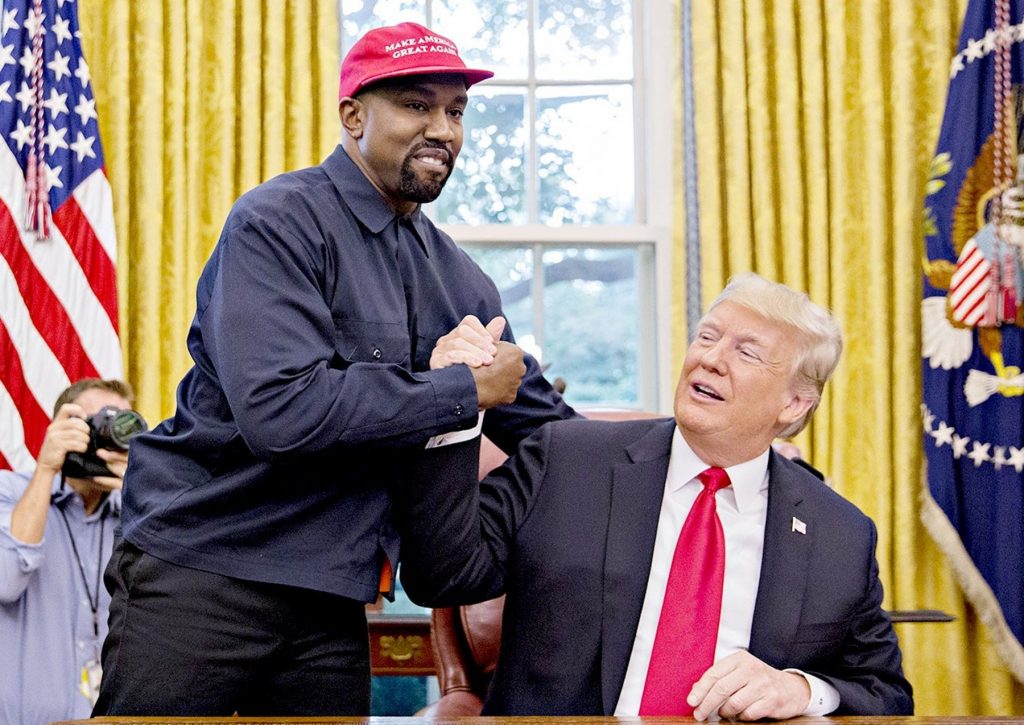 Kanye West at his fitting for the Presidential chair.

I am almost afraid to ask, but what has he had to say?

Not much. Recently West kicked his campaign into first gear with these words.“We must now realize the promise of America in trusting God, unifying our vision, and building our future.”

His new movement is to be called “the Birthday Party.” Borrowing liberally from The Black Panther, where,

Okay, that does not sound too far from the GOP sweet spot.

Wait a minute, though. Shortly after, West began to ramble.

“Vaccines are the mark of the beast. Planned Parenthood Clinics were placed inside cities to do the Devil’s work.”

That’s a lot to take in, but it is red meat for red-state conservatives.

His recent swipe at Joe Biden would fit under that same banner. “I’m not saying Trump’s in my way, he may be a part of my way. And Joe Biden? Like, come on man, please. You know? Obama’s special. Trump’s special. We say Kanye West is special. America needs special people that lead. Bill Clinton? Special. Joe Biden’s not special.”

Kanye West lacks any campaigning machine, although he has Elon Musk’s support and a potential running mate. He would like his Vice-President to be Michelle Tidball, a Wyoming preacher. Tidball claims to be a Biblical life-coach with some kind of a mental health background. Her wisdom includes seeking mental health by making your own bed and doing the dishes.

What has been the President’s response thus far?

Surprisingly restrained. He says that he welcomes the new competitor into the field. Some wonder if there is a collusion of sorts, between West and the President’s campaign team to draw off voters that could have been attracted to Biden.

West’s success sounds dubious to impossible, but many of us said the same thing four years ago.

It is not the same thing, because Donald Trump set up a national campaign two years before the nomination, much less the General Election. The paperwork facing West is daunting, and the deadlines loom large. The Federal Election Commission (FEC) has firm dates before which things have to be done. Battleground states, such as New Mexico and North Carolina, are closed to newly-registered candidates. As a commenter on an article about West in Barron’s Magazine understated.

“Candidates who have won the presidency tend to have gotten into the race much sooner than this.”

To date, none of the paperwork we mention has been addressed, even though the announcement/tweet is now nine days old. One would have expected a flurry of filings. Instead, we have silence. Whither, Kanye West? Sure, we will keep an eye on it. But, we are not sure that, as Earth, Wind and Fire once sang, “Time is on your side,” Mr. West.

What is Doomscrolling and Why It’s Harmful?