Home » Our World » Gildshire’s Guide to the 2019 MLB Playoffs

Major League Baseball began the regular season earlier than ever in its history this season. The first pitch was thrown Thursday, March 28. Given the season we just had, it was probably hit for a home run. In fact, a record 6,735 round-trippers were hit this season, topping the old mark by 750 homers. That is a topic worth our discussion, but we will save it for a later day. The 2019 MLB playoffs begin October 1. Today, Gildshire looks at the postseason lineup.

I can’t wait! Let’s start with the American League?

Once again, the Houston Astros topped the American League West, while the New York Yankees won the AL East. The Minnesota Twins took the AL Central. The two wild card entries are the Oakland A’s and the Tampa Bay Rays. (The poet in me likes the sound of that.) They own the best record in the league, so the Astros will play the survivor of the sudden-death Wild Card game, and the Yankees will face the Twins.

Sounds great! How about in the National League?

The Los Angeles Dodgers ran off and hid in the regular year, finishing with a team-record 105-56 record. They’ll try to erase memories of the last two World Series’ beginning with their series against the Wild Card winner. That’s going to be either the Brewers or Nationals. The Atlanta Braves won the NL East. They’ll play the St. Louis Cardinals, who only clinched the National League Central on the regular season’s final day. 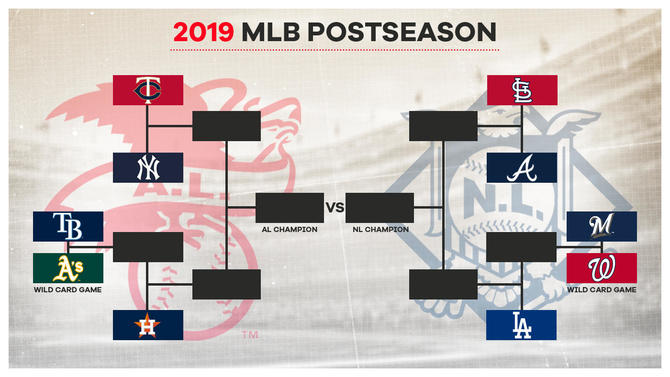 Before you say “anyone can win,” tell me who are the favorites.

Anyone can… oh…never mind. Frankly, it will be a surprise to Gildshire if one of three teams don’t win it all. So, become acquainted with the Houston Astros, L.A. Dodgers, and New York Yankees. Bet on any of the other teams at your own risk.

Does Gildshire have a dark-horse?

Ah, you know too well that we do love a good underdog. The St. Louis Cardinals have a history of over-performing their talent level in the playoffs, so they bear consideration. But look for the Tampa Bay Rays to cause someone some problems, if they can beat Oakland in the Wild Card game.

You can’t have seen a game this year without hearing about Cody Bellinger, Aaron Judge, Justin Verlander, etc. Tell me some names I don’t know, but should as I get ready for the playoffs.

Tell me some things to make me sound good if I haven’t followed baseball closely. I’m asking for a friend.

Tell your friend to say, “I can’t believe the Twins have to play the Yankees again.”

The Yankees beat the Twins like a drum in the playoffs. In fact, five straight times that the Twins have made the post, New York was there to beat them down, and it wasn’t even close most of the time.

That sounds good. What else?

Your friend can equate the Los Angeles Dodgers with the Buffalo Bills, since Buffalo went to the Super Bowl four straight times only to lose. (Dodger fans may not appreciate that as much as, say, San Francisco Giants’ fans. They LOVE that analogy.)

Gildshire must have a prediction.

They have depth in the starting rotation that most teams only dream of having, so the Houston Astros will parade the trophy through town for the second time in three years. Are you ready for the 2019 MLB playoffs, because you know, we are!