written by Emmaline Soken-Huberty May 7, 2018

Home » Travel & Nature » Kudzu: The Vine That Conquered the South

If you flip open a travel guide magazine for the South, you’ll see images of sweet iced tea, front porch swings, and sprawling meadows. However, there’s something else that Southerners associate with their home that isn’t quite so charming: the kudzu vine. 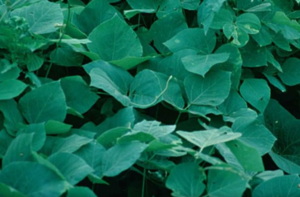 Kudzu, also known as Japanese arrowroot, is native to Eastern and Southeast Asia. It’s a climbing perennial vine with an extremely fast rate of growth. In its native land, it’s used as medicine to treat hangovers, fever, the common cold, and measles. Since the roots are rich in starch, it’s also used as a cornstarch substitute. If bees feed on the kudzu nectar (which they only due during drought), their honey becomes purple and tastes like grape jelly.

Its place in America is very different. At the 1876 World’s Fair in Philadelphia, the Japanese government set up a gorgeous garden pavilion decorated with plants. The kudzu, with its big leaves and blooms, appealed to gardeners. However, it wasn’t widely-planted beyond decoration. In 1920, the Central Georgia Railroad purchased thousands of plants. They wanted farmers to plant the vine so the railroad could haul it. The plants were very woody, though, and notoriously hard to bale.

In 1935, the time for the vine finally arrived. Drought hit the prairies and soil erosion became a real problem. Congress decided to use kudzu to combat it. A study in Georgia showed that kudzu – when compared to cotton – stopped 80% more water, protecting almost 100% of the soil from running off. It also fed nitrogen back into the ground. The Soil Conservation Service ran with this data, hiring hundreds to plant kudzu. They offered $8 per acre to farmers who planted it. 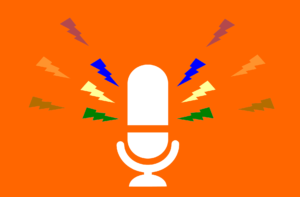 One man bolstered the government’s project, securing kudzu’s place in Southern culture. Channing Cope, a radio host, used the plant to appeal to Southerners’ sense of loss they hadn’t been able to shake since the Civil War. He claimed the green vines could make the South “live again.” Planting kudzu became a source of regional pride; there were even “kudzu queens” and parties centered around the vine. In 1943, Cope started the Kudzu Club of America, attracting 20,000 people. They vowed to plant 8 million acres of kudzu.

The vine takes over

That pledge proved to ring hollow. By 1945, only a million or so acres grew, and after the government stopped paying farmers to plant it, they began to plow it down. Farmers couldn’t make money from kudzu. Though animals loved it as feed, it took way too much work to harvest the plant whose roots sunk 7-feet into the earth. It also grew exponentially fast and nothing could kill it. Kudzu vines coiled over railroad tracks, killed trees, and climbed up telephone poles. The plant that should have made the South live again was taking it over.

Kudzu appears in nearly every piece of Southern literature from this time. In 1973, Alice Walker wrote an especially striking metaphor describing racism in Mississippi, calling it “that local creeping kudzu vine that swallows whole forests and abandoned houses; if you don’t keep pulling up the roots it will grow back faster than you can destroy it.” 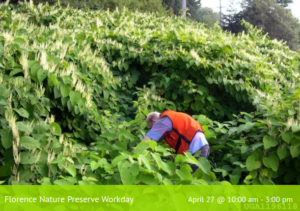 While kudzu appears on many lists of the most invasive species, the reality is that other plants actually threaten the South more. Asian privet, a flowering plant, consumes 3.2 million acres, which is 14 times that of Japanese arrowroot. While rumors say that kudzu spreads at 150,000 per year, the Forest Service actually says that number is around 2,500 acres. Nevertheless, it has become the poster child for the dangers of invasive plants, and will remain a symbol of the South whether the South likes it or not.

The monkey puzzle tree is another plant brought from its homeland for decorative purposes. You can see it in print and online travel magazines for places like Great Britain.

WNC For The Planet advertising a workday to remove kudzu