Home » Travel & Nature » The Sandgrouse: The Bird That Acts Like A Sponge

In the late 19th century, scientist Meade-Waldo attempted to solve a mystery. How did the sandgrouse, a bird that needed water everyday, carry it 30-40 miles across a desert to its babies? The established theory was that the sandgrouse drinks water and then regurgitates it, like doves and pigeons. However, Meade-Waldo had a different idea. 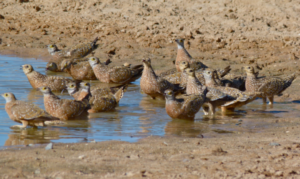 Sandgrouse at a watering hole

In his writing, Meade-Waldo said that the bird was actually carrying water in its breast feathers. It wasn’t his imagination; he had observed 61 broods in captivity give water this way. He also had evidence from observers in the wild. Other scientists didn’t believe it. The water would dry out during the flight through hot, desert air. There’s no way the bird could carry enough to keep his chicks alive, right? In 1965, two scientists proved that Meade-Waldo’s theory. They observed male sandgrouses in the Kalahari Gemsbok National Park travel to watering holes, absorb water in their feathers, and bring it to their babies.

There are sixteen species of sandgrouse, and they’re spread across Africa, Madagascar, the Middle East, and Asia. They make their home on the ground, and eat mostly seeds, though if there’s greenery available, they’ll eat that, too. They’ll also eat insects more frequently during breeding season. 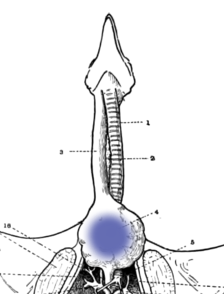 Crop (in blue) of a pigeon, a relative of the sandgrouse

With such a dry diet, water is essential to sandgrouse survival. In the desert, reliable water isn’t plentiful. Luckily for them, sandgrouses have a crop, which is essentially a pouch inside their throat that lets them hold water. When the birds drink, water goes into this crop and can be stored and used for 24 hours. Not all birds have this anatomical feature.

To propel them to watering holes, sandgrouse have very strong wings that let them fly over 30-40 miles at a stretch. They tend to gather in flocks of up to 100 for safety, and once they reach water, they will call to other members of their specific species. Once a sandgrouse has filled its crop, it’s time to collect water for babies.

Male sandgrouse are the primary water-carriers, though females do have the ability, but they’re not as effective. The birds wade in the water up to their bellies, and shift from side to side, shaking their feathers. Hairs like coils, known as “barbules,” soak up water and straighten. Because of the upright structure of the hairs and    tension (the same tension that lets certain bugs walk across water), the water doesn’t just fall out of the bird. It can take 5-15 minutes for a male sandgrouse to “fill up.” He then flies home, and provides his young with two tablespoons of water that the babies “milk” out.

For decades, the sandgrouses’ ability to transport water was the stuff of myths. Even when a scientist reported seeing it for himself – again and again – the community was unconvinced. 70 years later, he received vindication. The sandgrouse is unlike any other African bird and evolved to survive even in parched areas where water is scarce. The males literally carry water in their own bodies for their babies. That definitely puts them on the top of the list for best dad.

Hummingbirds will do just about anything for sugar, including impale each other with their sharp beaks!