Hummingbirds are a magical sight in a garden. Their tiny wings, iridescent feathers, and fast movements make them look like fairies. For all their smallness, they are one of the most complex and interesting creatures in nature.

There are more than 325 species of hummingbirds in the world, with 8 breeding regularly in the United States.

They are also found in the tropics and South America, where they hold an important place in Aztec culture. In their legends, the earth goddess Coatlicue found some hummingbirds’ feathers, and while she carried them near her breast, she became pregnant. Now, Coatlicue already had 400 children, and they plotted to kill her. However, just as they surrounded her, a full-grown man jumped from her body, armed to the teeth, and decapitated his mother’s attackers. 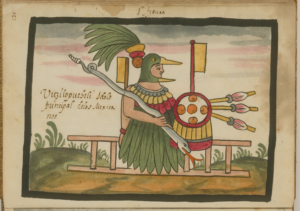 What do Hummingbirds Symbolize? 16th-century rendering of the Aztec god with hummingbird mask

This god was named Huitzilopochtli, and he reigned over war and the sun. In Aztec art, he appears as a soldier with a helmet decorated with hummingbird feathers, or as an actual hummingbird. Sacrifices appeased his temper, and he would help soldiers in war. When a warrior died, their spirit would be sent back to earth as a butterfly or hummingbird. To show their devotion to the god, kings would wear cloaks of hummingbird skins. There was clearly not a shortage of the tiny birds, because one cloak would require 8,000 of them.

Those gorgeous feathers help the hummingbird find a mate. While feathers may look dull at one angle, the bird knows to shift into the sunlight. The male Anna’s hummingbird, an especially colorful species, will purposely turn his body so the sun dances off his feathers. Hopefully, his beauty attracts a female.

If the hummingbird seems like an odd choice for a warrior god, you haven’t been around hummingbirds.

The males are very territorial and will chase each other and much larger birds away from their precious nectar. They sometimes wrestle in the air and even impale each other with their beaks. When flying forward, they can go up to 30 miles per hour, and when they live, they double that. If a male spots their own reflection, they will glare and pose aggressively, and even crash into windows.

All this fierce energy is fueled by tons of sugar, and supplemented by spiders and insects. While the ruby-throated hummingbird only weighs 3 grams (less than a nickel), they need to eat half their weight in sugar every day. If you translate that to humans, that’s the same as a 200-pound human drinking 1, 100 cans of Coke.

The hummingbird’s need for sugar is because of their fast heartbeat, high body temperature, and fast breathing rate. If they aren’t eating 5-8 times each hour, their bodies will get too cool, and they’ll enter a state called “torpor,” which is like hibernation. Their metabolism goes down to just 1/15 of its usual speed.

The beaks of hummingbirds look like tubes, but they don’t actually “suck” up nectar. The hummingbird tongue is capable of licking speeds up to 13 times per second and operates like a pump that pulls in delicious nectar.

Because their need for food is so constant, hummingbirds have special skills like the ability to know how much sugar is in nectar as they drink. They will reject flowers with nectar less than 10% sugar, and stick to flowers with higher content. They even have an enlarged hippocampus, which allows them to remember where the best flowers are. This is good news bird-watchers who want hummingbirds to visit their feeders.

Parrots are also fascinating. Ever wondered how they communicate with humans?

How to Become More Self-Aware?