The 60s was a period when a powerful desire for change swept across all structures of society. The sexual revolution and the movements against the war that became the trademarks of an entire generation. Media also underwent its own transformation, and advertising was the main engine of development. 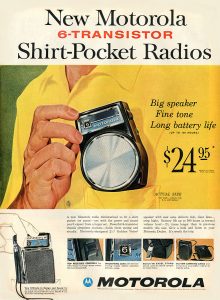 The 60s advertising revolution was in full force. Along with everything else, advertising exploded both in volume and in content. Some historians of that period tend to put all the “blame” on the emerging breakthrough in technology. However, it was the courage of doing things in a different, non-conventional way, that eventually led to the “Golden Age of Advertising”.

Julian Koenig teamed with Helmut Krone to create the “Think Small” and “Lemon” ads for Volkswagen, under the supervision of William Bernbach. The advertising campaign focused on the Beetle’s form. This was smaller than most of the cars sold at the time in the U.S. By using a different vantage point, the weakness of the product became the fuel for its popularity. The campaign had “simplicity in mind, contradicting the traditional association of automobiles with luxury.”

The campaign featured posters in which a small image of the VW Beetle was “lost” in a vast empty, whitespace. For the first time in advertising history, the product occupied less than a quarter of the poster. The text and fine print that appeared at the bottom of the page listed the advantages of owning a small car. Yet it was the visual impact that brought shock waves on the market. In a survey that covered North American adverts, “Think Small” ranked as the best advertising campaign of the twentieth century by Ad Age. It was also considered the fundamental building block for the European car brand.

The most important change inside agencies on Madison Avenue was the shift of power from the account executive to the creative department. For the very first time, a well-designed advert was able to bring in more customers than an army of field salesmen. For the first time, not saying things literally and politically correct became accepted as viable advertising. The minds behind this rupture in advertising traditions became labeled as the “Mad Men” of Madison Avenue. We owe them much of how the world communicates today.

Why We Should Encourage Healthy Anxiety?