Home » Our World » The Nobe 100: Innovation on All Three Wheels

Three wheels? Are you crazy? A Can-Am bike maybe, but not under a car! Are you in one of the legal weed states right now? Honest reactions, and reasonable questions, but ones that Gildshire can answer with ease, if not glee. The Nobe 100 is unlike anything you will see on your afternoon commute. It’s vintage in a way that whispers, “I’ve seen something like this before,” but never tells you where you saw it. It’s a classy looking ride, but did we mention the three-wheel thingy? The picture alone made Gildshire want to investigate further. We enlisted the help of Roadshow by Cnet for some of the research.

How do you explain the exterior? Well, from the front you could be looking at a mid-50s Studebaker. The round headlights and round grill that is wider at the top than at the bottom gives that impression.

From the side, we see classic lines, with just a hint of adornment in a ridgeline running along the top half. So far, the Nobe 100 is a regular, small car.

In back…wait! Where is the rest of it? The Nobe 100’s rear end comes to a point. That’s because the third, and final, wheel sits amidships, balancing the two wheels in the front. It is a look that balances yesterday with tomorrow in a way that the manufacturer hopes will make it a success today. All in all, the exterior borrows from classic Fiat, Isetta, Facel-Vega, Messerschmitt, and others of that ilk. An eye for the classic, for sure. 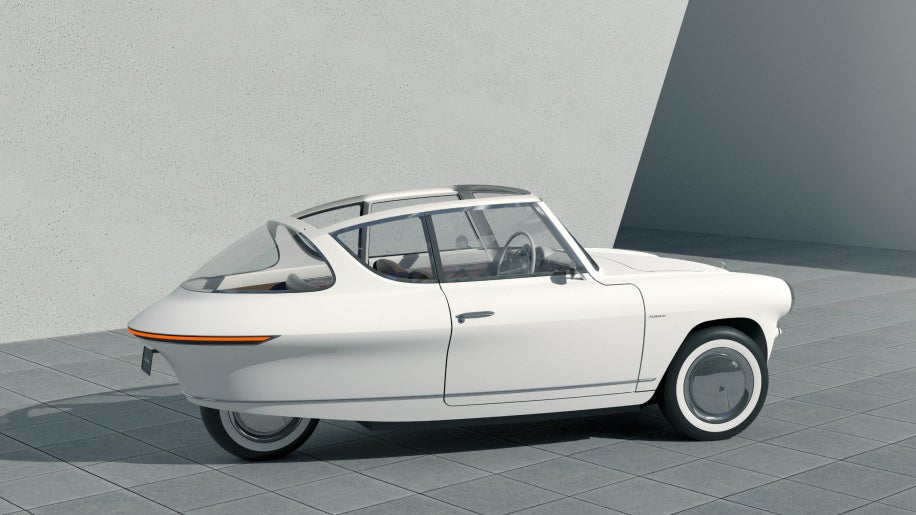 The Nobe 100 is available with a panoramic sunroof. Given the design, that makes it practically a convertible.

The interior has a gauge cluster/temperature control setup borrowed from the W113 Mercedes-Benz SL, which was also known as the Pagoda. Just as was the case with that Benz in that era, the gauging is minimal and spare. It appears to seat five, in a pinch. Four adults will fit nicely.

Underneath all of that vintage bodywork, we find all-wheel drive. Read that again. We said AWD on a three-wheeled car. Feel free to take a break for the repair and maintenance of a blown mind.

The manufacturers of the Nobe 100 report that it will exceed 60 mph and will cover 136 miles on a single charge. We suspect that the 200, or 2.0, will nearly double that range number.

The Nobe 100 isn’t a Tesla, but neither is it a toy. It is a commuter car for those who love the idea of electric, while not needing to travel 80 mph on a rural Idaho interstate.

Who is behind this thing?

Roman Muljat, an Estonian businessman, invented the Nobe 100 and estimates it will come in at just under $34,000 and be available for sale sometime in 2020. For now, it’s unclear if it will be sold in the United States. Gildshire is hoping on hope that it does come to our shores.

Why do I feel a “however” coming?

Yes, Mr. Muljat is now attempting to crowdfund the launch. Nobe just announced that it is taking preorders for the Nobe100. That’s exciting, but Indiegogo is the crowdfunding source. We can only hope that Indiegogo improves on its track record for successful launches.

Startups make big promises, borne of big dreams, and this could be another idea that never comes to fruition. But, Gildshire is rooting for the Nobe 100. We think it has a future in urban America.

Time’s Most Important Places In The World