The Rarest Gemstones In the World

Home » Our World » The Rarest Gemstones In the World

They say diamonds are a girl’s best friend, but there’s a huge range of other gemstones that are just as beautiful and in some cases, much rarer. Here are four:

In 1902, a French mineralogist was working in Madagascar and discovered a blue-green stone. He named it “grandidierite” after Alfred Grandidier, a French explorer who specialized in Madagascar’s natural history. Since then, only a few examples have been found and the only gem-quality stones are found in Madagascar and Sri Lanka. The most rare grandidierite is transparent; most are translucent. Because it looked so different, experts thought it was another gem, but after analysis, its true identity was revealed. It was sold for an undisclosed price, but we’re betting it was pretty high. It was most likely put into a piece of jewelry, because grandidierite 7.5 hardness makes it very scratch-resistant.

Found only in California, benitoite was first identified in 1907. It’s a little unclear who was involved exactly, but we know that the stone was first believed to be volcanic glass, but then after inspection by George Louderback and other experts, it was declared an entirely new mineral. It was named benitoite because it was found near the San Benito River. A mine opened up, but it closed in 2006, so the deep-blue stone is even more rare. It’s the official state gemstone of California, though some small samples have been found as far-ranging as Japan and Australia. A gem-quality stone can cost as much as $10,000 per carat. 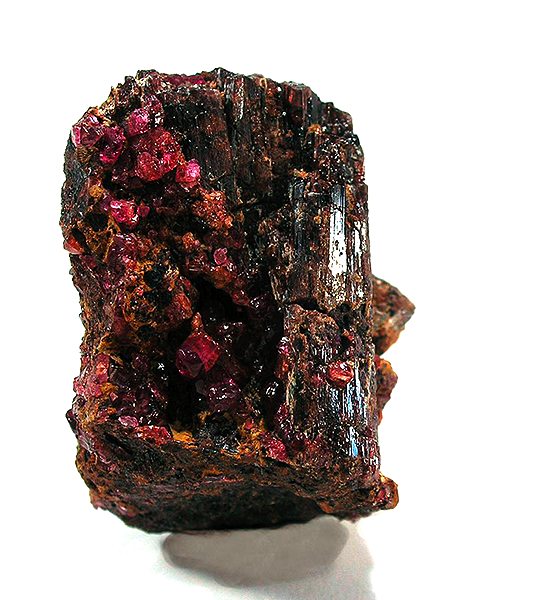 In 1951, Arthur Charles Davy Pain came into possession of a dark red crystal from Myanmar. It had been plucked from a river bed known for its deposits of sapphires, rubies, and spinels, but something unfamiliar was hiding there, too. He sent a batch to the Natural History Museum in London in 1957, where experts realized the crystal was brand-new to classification. It was named “painite.” For years, that was the only example of the stone and it was carefully guarded at the British Museum in London. Why so rare? It contains an unusual chemical combination of zirconium and boron. Eventually, another high-quality crystal was found, and it joined its older sibling. In 2005, a new source was finally uncovered and thousands of stones were found. However, most of them are not gem-quality, so getting an actual cut gem is expensive at about $60,000 per carat.

An Australian gemologist bought a violet-colored gemstone in 1945, and though it was classified as spinel, he saw some differences. He sent it to a lab, where it was eventually revealed to be a totally new stone. It was named “taafeite,” after the gemologist. This was the first time a gemstone had been identified in a faceted form and not as a rough stone. Today, high-quality samples are found in Sri Lanka and Tanzania, usually by deposits of mica, spinel, and tourmaline. It’s over 1 million times rarer than a diamond. In addition to violet, it’s hues come in red, green, blue, or even clear, though it’s most commonly-found in light purple. Deeper red and purple, which means the stone has iron and chromium, are the rarest.

Did you know that the pearl is the oldest example of a sought-after gemstone? Click here to learn about its historical and fashionable significance.

Shopping is More Personal Than Ever!