Just when you thought that the self-drive movement was slowing. At the same time that accidents and mishaps were casting doubt on the future of the entire self-drive movement. In concert with car companies scaling back on self-drive in favor of driver aids and interaction between driver and car. When all of that is taking place, the United States Postal Service drops a bombshell on the world of cars, trucks, and other wheeled vehicles. The next post office semi you see motoring down the highway may have no one behind the wheel. Rumors of USPS testing self-driving mail delivery trucks on some southwestern routes are true. This is big, and Gildshire wanted to learn more. Forbes and Car and Driver helped with the research.

When did this happen?

The news broke Tuesday. The United States Postal Service started a trial run, sending big-rig self-driving mail delivery trucks on their Dallas, Texas to Phoenix, Arizona runs. The trucks will be evaluated in a myriad of ways having to do with efficiency and performance over the 1,064-mile journey. That is a trip that takes a traditional driver about 22 hours to complete. The testing will be in partnership with TuSimple, a company with significant experience in autonomous driving resting procedures.

The USPS has taken steps before toward modernization, but none as bold as this one. In fact, their modernization efforts have been halting at best. Recent reports indicate that the age and condition of the local USPS mail delivery fleet are reaching a critical point. The Grumman Long Life Vehicle (LLV, and pictured below) are old and breaking down on the side of the road. Some of them are catching fire! 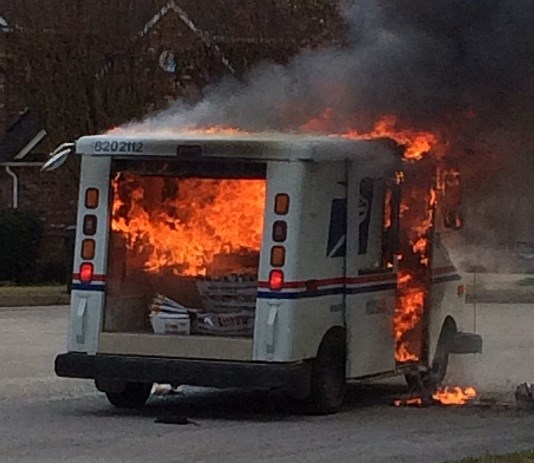 So far, no proposed alternative has been considered efficient enough, or dependable enough to take over the load. A successful autonomous test of long-haul delivery could be the major modernization that the postal service seeks. It could lead to further improvements to the fleet and an overall upgrade to the public’s perception of a government agency past its prime. Without a doubt, improvements to the smaller-sized fleet would follow.

Is this even safe?

TuSimple’s test fleet is equipped with a long-range camera system that can see 0.6 miles in front of the cab. That’s far better than any competitor has been able to manage. It’s also further than the human eye can make out clearly. A safety engineer and driver will accompany each test truck to monitor the vehicle’s overall performance.

To allay the fears of those who would question the safety on the road of this project, TuSimple released an informational video this week. It showed a truck navigating through heavy rain and wind with the self-drive engaged.

If self-drive 18-wheelers succeed in real-life over the road scenarios, they could help to solve a mounting driver shortage problem in the trucking industry. The ATA (American Trucking Association) says that today’s deficit of 80,000 available drivers could grow to 175,000 by 2024. That would be a problem for a society growing dependent on online shopping, along with fast delivery times promised by shippers. Long-distance routes such as the Phoenix to Dallas one currently planned for testing require two drivers on an overnight shift, adding to the personnel shortage.

So, the next time the kids want to the driver of the big rig to blow his horn, there may be no one there to answer back. Car to truck communication will never be the same, and self-driving mail delivery trucks are the reason why.

Gaslighting In A Relationship: How To Spot It

Spiciest Meals In The World