One week. Seven short days. That’s how long the United States’ automobile industry could continue to run if President Trump’s plans to blockade Mexico were to come to fruition. The news this week that shutting down the border between the U.S. and Mexico was on the table (again) sent shockwaves through the auto industry. Such an event could prove catastrophic to the industry worldwide. That would lead to serious consequences for the entire American economy. Here is what Gildshire knows to this point. Motor1 and CNN were instrumental in unearthing the facts.

The Administration obviously didn’t know of the interconnectedness of Mexico with the U.S. auto industry. Kristen Dziczek, vice president of industry, labor, and economics from the Center for Automotive Research, explains that virtually every car, truck, and SUV in this country has parts that are sourced from Mexico. Ms. Dziczek continues to say that approximately 16% of the auto parts used in manufacturing, as well as at your local auto parts store, import from south of the border.

“Any action that stops commerce at the border would be harmful to the U.S. economy, and in particular, the auto industry. Access to Mexico’s marketplace and North American integration are critical to operations in the U.S.” 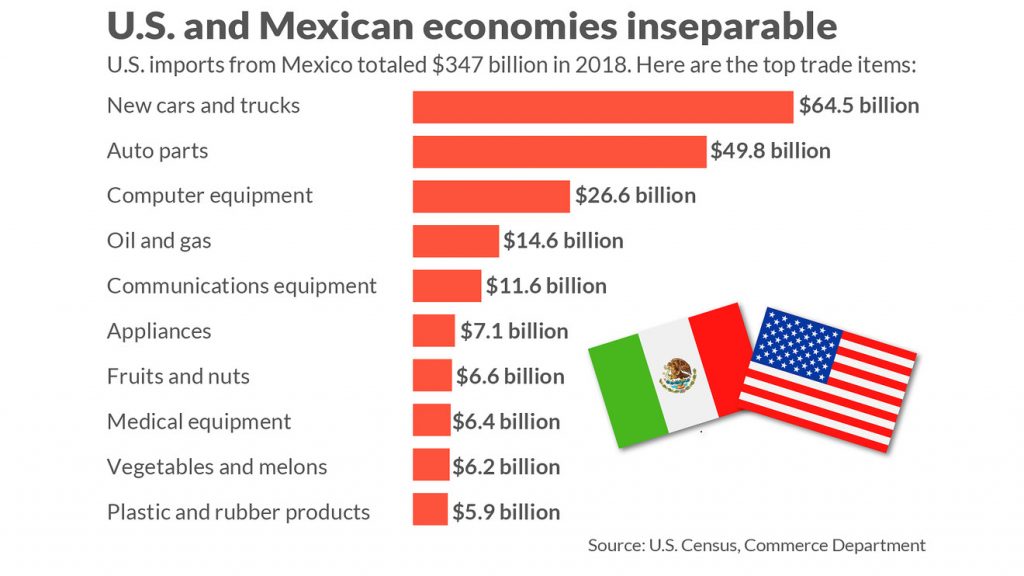 The U.S. and Mexico’s shared industries.

Of course, the President is vocally critical of CNN’s coverage of his policies, but other national and international news outlets tell us of the dire consequences that a border blockade would have on this country’s automobile industry. Ms. Dziczek went on to say that our neighbor to the south accounts for 37% of all imported car parts in the United States. Her prediction of the consequences of a blockade were even direr. She said a border closure could see some auto manufacturing plants go idle in a few hours.

Several Trump Administration members told reporters that President Trump was warned about the drastic economic consequences of a border shutdown. Then he began to back away from his earlier threats, in favor of talking about a “one-year warning” plan.

This auto industry dustup between the Administration and our neighbors to the south is the latest in a long-running verbal gunfight. But, it is a fight that he can’t lose in certain segments of society.

In part, the President is in office due to his populist message of America first, last, and always. There is a note in that message that rings true to voters in the midwest and south. Both are regions of strong support for President Trump. His alleged personal issues are overlooked in that area (though it is often called the Bible Belt) because of his resistance to immigration in general, and absolute rage over illegal immigration. When he talks about “a caravan invading the U.S.” his supporters come to heel in response to his words.

But, this time his words went too far, at least according to leading economists. So, for now, the border to Mexico will not be closed. Cars will continue to roll off assembly lines from coast to coast.

Emphasis on “for now.” We will watch further developments.

Everything We Know About The New Amazon LOTR Show