Fine dining is great! What a pleasure it is to dress in our best finery, climb in the Escalade and be whisked to the city’s poshest haute cuisine. A typical evening goes something like this:

The valet takes the keys with white gloves made with something that recently covered a llama. The doorman greets you, probably by name. “Good evening Mr. and Mrs.Vanlandingham. What an honor it is to serve you tonight.” You smile, somewhat imperiously. “He’s a good man,” you say to the bejeweled Lady Vanlandingham as you glide to your banquette, “but his grandfather never had a seat on The Exchange.” Around you, speaking in hushed tones, are “your people.” They are captains of industry and wield the true power behind City Hall.

That sounds exhausting, not to mention expensive. Dinner at an iconic Seattle dining spot lands at $365 for two, but that isn’t the worst thing we heard today. One San Francisco restaurant has a Chef’s Menu available for $500 plus tax and tip. Oh, that half a thousand is the per person price?

Did I bury the lead? That’s okay because we wouldn’t want to offend the Vanlandingham table. Truth told, there is another choice to be found. It is one that lives on the far end of the dinner spectrum from where Mr. and Mrs. V eat foie gras.

Cheap Eats is the low-price end of the Gildshire Magazine restaurant project, and it may be the most fun. Today, we begin with a historic legend of fast food in the South Sound city of Tacoma, Washington. Welcome to Frisko Freeze!

From the weathered image of a hamburger on the sign to the handwritten menu in the window, Frisko Freeze is a throwback. A Tacoma tradition since World War II, this “burger joint” (meant in the best way possible) serves thousands of folks on a busy day, and they do it with just one walk up and one drive up window.

If it could talk,  Frisko Freeze could tell stories that bespeak the history of this working-class town. Like Arnold’s Drive-In of Happy Days fame (which was fictional), Frisko Freeze has seen fist fights, first kisses, hookups, and breakups. Legend has it one native Tacoman’s conception took place after hours in the parking lot.

A peek inside reveals absolutely nowhere to sit. In fact, the space inside is a marvel of too many people in a too small place. Many an ice cream cone swings in a pirouette as its holder avoids the guy at the fryer. Yet, service is accompanied by a ready smile, almost all the time. It’s a first job for the (mostly male) crew, but it is a great first job. 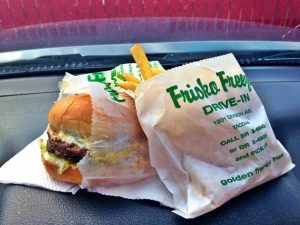 Some say the Frisko Freeze “Beefburger” and Fries was the reason for the dashboard.

Do you like onions on your burger? You’re in luck because there are lots of fresh cut onions on their “Beefburger.” If you like your fries hot, well you are in luck once again. The fries are fresh, hot, and the right combination of crispy and “bendy.” Not only that, the onion rings are better than the fries! Would you like a choice of shake or malt? Of course, you would. Lots of flavors and flavor combinations for ice cream drinks include blackberry, root beer, caramel, pineapple, and hot fudge.

That would be enough, wouldn’t it? However, like the infomercial on late night TV, “That’s not all. There’s more!” Frisko Freeze boasts the best Fishwich (and that’s what they still call it!) in town. It is both flaky and flavorful, a trick so many fish sandwiches fail to perform.

Come on a rainy day and huddle with the hungry masses under the small awning, or come on a sunny day and watch the classic convertibles converge on this South Sound hamburger classic! You’ll finish lunch with a full tummy, and you’ll still have cash in your jeans. Chauncey Vanlandingham hasn’t been able to say that since he left prep school.