Here are the seven best public golf courses in the United States, according to us. Opinions and priorities vary with individual golfers, so we didn’t put them in a 1-10 order. Except for the last one, that is. Because it is the best.

The TPC courses are uniquely designed as a stadium concept for the benefit of spectators. Instead of hiking miles to see several courses, onlookers can stay put and see the action at several holes, all at once. However, the uniqueness of TPC Sawgrass isn’t in its stadium concept. It’s that diabolical island green that the players must hit while dealing with the winds off of the Atlantic! Every golfer should square up against that island at least once.

You may have heard that Erin Hills was founded to host a U.S. Open. That wasn’t true, though the golf course founders approached the PGA shortly after it was built. Truth told the course was designed to celebrate Mother Nature and her way of turning terrain into golf courses. The 7,812-yard par 72 course sways and undulates with its surroundings in an almost hypnotic way.

Bethpage Black was once known for its parking lot as much for its course. You see, the course was popular, but it was first-come-first-served. So, scores of cars would line up in the lot and golfers would sleep overnight, in hopes of getting a coveted tee time. Think of it as Hooverville in plaid slacks. Now, you can reserve a tee time online. Check your ego, though. Bethpage Black is hard to play to a low score!

Several years ago Pinehurst #2 went under the knife and was transformed. Gone was the Bermuda grass rough that dated to the 1970s. Instead, the course designers put in bands of hardpan sand (native to the local area) and dotted the course with wiregrass and pine needles. They reduced irrigation to prevent non-native grass from returning, and in doing so, gathered rewards for water savings and environmental fair play.

Back in the day, Shadow Creek began life as an exclusively private course. In fact, it was The Best New Private Course of 1990, as rated by Golf Digest. Since going public, though, changes have been made to the layout, to the point that it is described now as “a symphony.” What do we mean by that? Its holes alternate difficulty rating, and between wooded, and open range. Some say it should be on every golfer’s Bucket List and Gildshire cannot disagree. 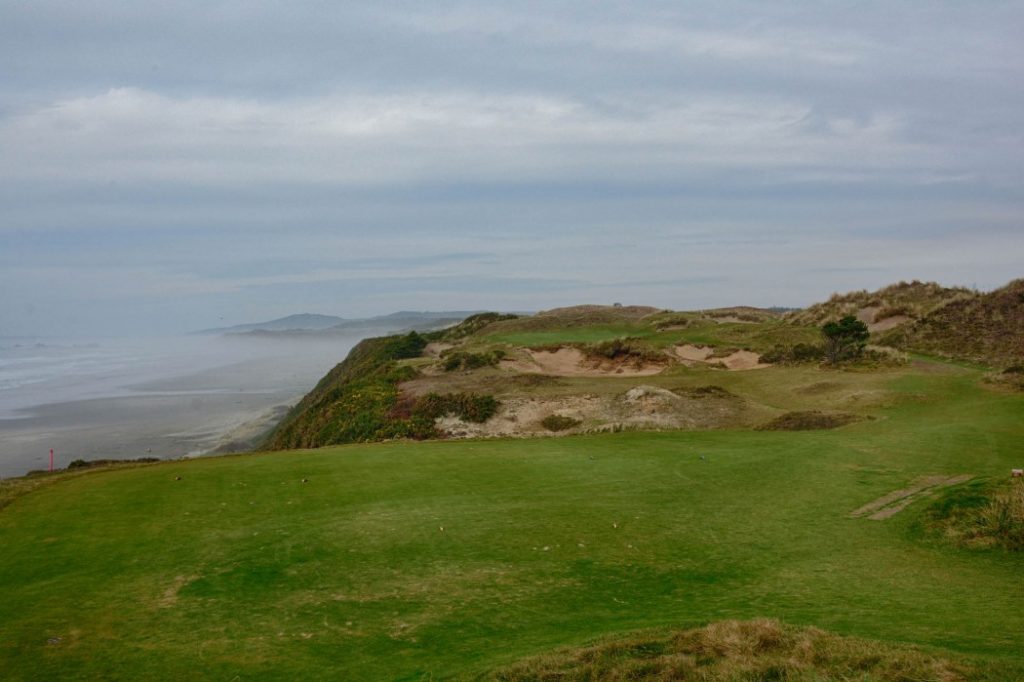 As the fog rolls in, Pacific Dunes resembles no other golf course.

Tucked away in a part of the country that urban sprawl forgot, find Bandon, Oregon. Home of one of the U.S.’ best golf resorts, with multiple tracks of link-style splendor. Challenge yourself against a course that seems to rise organically from the surrounding landscape. Then try and beat the wind that sweeps in from the Pacific Ocean as if on waves of its own creation. It is a magical place and could be the best in the entire nation…if not for…

Pebble! One word says it all for golfers of all ages and all skill sets. It is the crown jewel of the Monterey Peninsula and Mecca for the golfing hordes that live out their dream here. It’s called the most profound meeting of sea and land in American golf, and is the most extensive one, as well. Nine holes perch overlooking the crashing Pacific surf. Heck, holes 4-10 never leave the shore and 17-18 come back for more. Pebble Beach’s holes 6-8 overlook the sea AND test the mettle of any golfer.

And those are our best public golf courses in the United States, which one is your favorite?