Home » Our World » Honda Woes Continue With Massive Accord Recall

“Hondas are the most reliable cars on the road.” That was a Universal Truth until about five years ago. Since then, Honda’s reliability issues have pushed it back in the pack. In the last 3-5 years, domestic badges like Chevrolet and Ford are higher quality cars. So say the experts at J.D. Power and Associates. Evidence this week from The Drive supports them. Honda is recalling 1.2 million Accords because their batteries could suddenly catch fire. 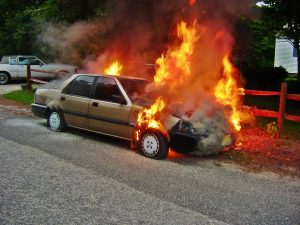 Don’t let this be your car

The affected cars are Accord sedans from the 2013-2016 model years. The issue is with sensors placed on the battery terminal (apparently just the negative terminal). They are improperly moisture sealed. Road salt is invading the area, causing an electrical short. That the heat (and potential fire) can be a safety hazard is a gross understatement.

The carmaker says there have been four engine fires as a result of the problem. All four fires took place in States with harsh winters requiring the use of corrosive road salt.

Accord owners will be notified by the company. Honda dealers will replace faulty sensors without cost to the owners. Sensors without evidence of corrosion will be sealed anyway and replaced at a later date.

This is just the latest snafu owners have endured in the last few years. 2015 was a problematic model year. That year, Fits were recalled four times, while 2015 Civics and the 2015 Odyssey hit the recall list, as well.

The carmaker is also suffering losses in the courtroom. Recently, a judge ruled in favor of Honda owners in a class-action lawsuit. The judge upheld claims that Hondas equipped with V-6 engines consume an excessive amount of oil. Furthermore, the judge ruled that the company knew about the issue and failed to warn owners.

Honda’s problems began earlier than the 2015 model year. CR-Vs, Odysseys, and Acuras were all subject to recall between 2012 and 2014. Braking and transmission issues were to blame.

Observers wonder what steps Honda will take to re-establish an image of reliability. Owners are wondering even more. Gildshire Magazines will keep an eye on the situation, as well.