Science News: Where did the First Interstellar Asteroid come from? … and More

Home » Our World » Science News: Where did the First Interstellar Asteroid come from? … and More

Where did the First Interstellar Asteroid come from?

Astronomers were following an asteroid speeding past Earth in October 2017. The group of scientists are trying to figure out the exact origins of this alien rock. However, we might never know!

The asteroid, called Oumuamua, was spotted for the first time on October 18, 2017. The speed of the asteroid is approximately 25.5 kilometers per second. What we are trying to do right now is determine the Oumuamua’s path backward in order to link the asteroid to a particular star or group of stars. We assume that the asteroid is relatively young, but it’s hard to establish where it came from. The team of astronomers from the Leiden Observatory in the Netherlands found out that the asteroid passed the unremarkable star TYC4742-1027-1 1.3 million years ago.

Simon Portegies Zwart from the Leiden Observatory in the Netherlands said: “From my perspective, this object has been hopping stars since it became a free-floating object.”

How can we find the origin of an unknown asteroid? Usually, stars born in the same cluster have the similar speed, even when they fall apart. The similarity in speed lets astronomers identify asteroids related to those stars who should have similar speed as their stars.

Stars’ Collision Tells us more about the Mysterious Neutron Star

Andreas Bauswein, a physicist from the Heidelberg Institute for Theoretical Studies in Germany: “The properties of neutron star matter are not very well known.” The main problem is that the matter inside of a neutron star is so dense that one teaspoonful would weight around a billion tons which it makes hard to reproduce in any research center on Earth.

In the collision of two neutron stars, the object usually lasts for only a few milliseconds before collapsing. The speed of a final demise of a collided object tells us a lot about the material of neutron stars and the radius of a neutron star.

An immediate collapse is not that common. However, if a neutron star is made of a soft material it will collapse more quickly than stiff neutron stars who have the same mass.

“For measuring the Hubble constant, what we got from the gravitational waves is not a huge deal—we didn’t change our understanding of how the universe expands,” said Imre Bartos, assistant professor at the University of Florida. “But it shows what we’ll be able to do very soon.” 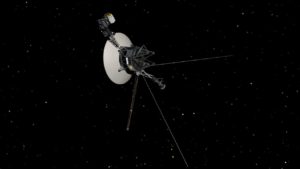 Voyager is not only the farthest and fastest spacecraft we made but and the only human-made object in interstellar space. The famous spacecraft has been flying for more almost 40 years, and it relies on devices called thrusters for orientation and communication with Earth.

Suzanne Dodd, project manager for Voyager at NASA’s Jet Propulsion Laboratory, Pasadena, California told us how vital these thrusters are: “With these thrusters that are still functional after 37 years without use, we will be able to extend the life of the Voyager 1 spacecraft by two to three years.” Needless to say, if something goes wrong, there is no mechanic shop nearby at 13 billion miles from Earth where Voyager 1 is currently located.

In the early days of Voyager 1 mission, the spacecraft flew by Jupiter, Saturn and all major moons of each planet in our solar system. Currently, its location is 13 billion miles away from the Earth which is a significant step for humanity.

Voyager 2 will enter interstellar space in the next few years. The Voyager spacecraft were built by JPL, a division of Caltech in Pasadena.

In 2017, we celebrated 40 years since the launch of NASA’s Voyager 1. The spacecraft has contributed to our overall knowledge about the solar system, including information about planets and their moons. Here you can find a collection of photos that were taken by Voyager.

It’s interesting that the Voyager contains a copy of a record with sounds and sights from the Earth, including music, images and audio clips of people and animals.

Amelia Simmons: The Mother Of Cookbooks