Founded in 1966, Shanghai Ballet has become renowned for its choreographic crispness, sweeping and lush visuals, and the awe-inspiring skill of its dancers. From January 17-19th, 2020 Shanghai Ballet and China Arts and Entertainment Group Ltd. presented Derek Deane’s Grand Swan Lake at the David H. Koch Theater at Lincoln Center for the Performing Arts in New York City. 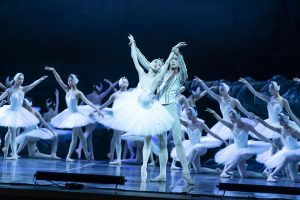 Swan Lake follows the timeless and tragic love story of Princess Odette and Prince Siegfried. The music was composed by Russian composer, Pyotr Ilyick Tchaikovsky and was performed by the New York City Ballet Orchestra with conductor Charles Barker from American Ballet Theater. With over 80 dancers, 48 of those being swans, this production was one for the books! Artist Director of Shanghai Ballet, Derek Deane, directed and staged the numerous swans and had said that creating such a grand version of Swan Lake was an experiment to make it more interesting. During this collaboration, Deane said the troupe was “very adaptable…very willing to change. They listen and they learn very quickly.” Grand Swan Lake turned out to be an enormous success. With physical and emotional impact on stage, the audience was captivated. When the three hour opening night production concluded, the audience, which was of over 2,000 people, gave a five minute standing ovation.

The show toured several countries from 2016-2018 including the Netherlands, Belgium, Australia, Germany, and Austria. In various cities during those tours, the troupe performed nearly 100 (96 if my math is accurate) triumphant, well-received performances! Grand Swan Lake doubled the classic amount of swans on stage, daring the dancers to exceed expectations. Qi Bingxue, the principal dancer who played Princess Odette, said that the large amount of “swans” on the stage required all of the dancers to be trained harder than in the classic version in order to reach a remarkably high level of precision so that “48 swans move like one.”

Bingxue has been a dancer in Shanghai Ballet for over 15 years, since graduating from Shanghai Dance School in 2014. From her beginnings as a new member of the troupe to her current principal dancer role and First Prize winner of the 3rd Beijing International Ballet and Choreographer Competition, amongst many other important achievements, Bingxue has spread her wings as a ballerina. Performing at Lincoln Center is another achievement to take note of for Bingxue and her fellow dancers. Bingxue has said that “It’s a dream (that has) come true. We’ve been looking forward to this day for a long time.”

Wu Husheng, the principal dancer who Prince Siegfried, also attended Shanghai Dance School and joined Shanghai Ballet in 2003 after his graduation. His award list goes on and on, but most recently he has won the prize for “The Best Choreographer” in Excellent Performance of Young for his Smile in the Dream choreography.

For the dancers of Shanghai Ballet to perform at Lincoln Center in New York City is an honor and proves that their hard efforts have paid off. Xin Lili, the executive director of Shanghai Ballet, had hoped that their performances at such a celebrated venue would help to introduce the troupe, which is regarded as a cultural brand for Shanghai, to the mainstream ballet world. As a dancer and award winner herself, Lili understands the world of ballet.

Similarly, Derek Deane has quite the history as a dancer, choreographer, and director in the field of ballet. He joined The Royal Ballet in 1972 and rose the ranks quickly, though left in

The limited performances that occurred in New York City made it so only a handful could witness this magnificent ballet. While these pictures are gorgeous, they cannot possibly do the show justice.

Changes Ahead for the Car Industry as We Know It