The report is 130,000 pages long and spans over two decades. It contains over 12,500 reports of UFO sightings, and while most of them are explained, there are some that remain a mystery. What is the purpose of Project Blue Book? Was it the government’s way of reassuring the public that UFO and aliens aren’t a real threat, or, as some critics believe, was it all a giant cover-up?

In the summer of 1947, Kenneth Arnold was flying his small plane. During that month, he spotted nine strange objects. The press jumped on his story and it became widely-known. It seemed to spark UFO fever, most notably in Roswell, New Mexico, where true believers claimed an alien spaceship crashed. In 1948, the Air Force launched Operation Sign, which consisted of a panel of experts and air force leaders analyzing data. Its next phase, Project Blue Book, began in 1951. 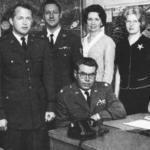 One of the Project Blue Book staffs

If the government hoped investigating would quell UFO hysteria, they were wrong. In 1952, there were so many sightings that President Truman became worried about collective hysteria. The next year, the CIA assembled an expert panel who added to Project Blue Book. During its tenure, Project Blue Book investigated thousands of reports, including the famous “Lubbock Lights” incident in 1951. The Air Force concluded that the lights were most likely created by birds, who have a white chest that could – in the words of the report – “easily reflect city lights.”

In 1968, the Air Force concluded that UFOs were nothing to worry about, and no further investigations were necessary. Project Blue Book officially shut down in 1969.

What did the government conclude based on all their research? Most sightings could be explained as natural phenomena, aircraft, hoaxes, or mass hysteria. The files first went to the Maxwell Air Force Base in Alabama for safe-keeping, and then to the National Archives in Washington, D.C. For years, anyone interested needed to look at them with a microfilm projector. Now, however, a huge portion of the files have been released to the public. The Black Vault (which calls itself the largest privately-run online repository of declassified government document) has most of them, so anyone is free to examine the reports for themselves.

Not everyone is satisfied with the government’s conclusions on UFOs. One of the advisors, an astronomer, founded the Center for UFO Studies to continue the investigation. There are also reports in the files that have not been explained, like the incident in 1964 with a police officer who saw an unusual aircraft. When he followed it, it landed, and two child-sized occupants came out. When it took off again, it left scorch marks. It’s also interesting to note that the National Archives has not been able to find any documentation about Roswell within Project Blue Book. 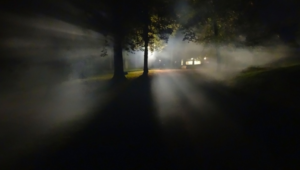 For many, the book is hardly shut on UFOs and aliens

Project Blue Book has made many notable appearances in pop culture, including “Twin Peaks,” where an air force officer who worked on the project features as an important character. His work on Project Blue Book revealed evidence of the Black Lodge, an evil plane of existence that is home to the demon BOB, who (*spoiler*) killed Laura Palmer while possessing her father. The History Channel has also recently ordered scripted drama “Blue Book,” from Robert Zemeckis. It is currently in development.

Curious about other UFO sightings? Click here to read about some of the most famous!