Hello again, sports fans. Your Gildshire college football expert has been hard at work this week, deciphering the college postseason picture for 2019/20. Of course, the bowl season will conclude with the College Football Playoff. Ohio State, Clemson, LSU, and Oklahoma will play for the big trophy. We will deep dive into those teams a little later. Today, we want to look at the bowl games between now and the New Year. What games are intriguing? Which of the bowl game sponsors make us go, “huh?” Here are 2019 bowl games that we intend to watch.

Why watch it? Because it is the first one, of course? Prove your commitment to college football by watching the first bowl game. After all, you can’t watch them all if you don’t watch the first one. Besides that, though, watch it for Buffalo Bulls’ running back Jaret Patterson. He could wind up with over 1700 yards if he gains 75 against Charlotte. Oh, for those who are wondering, “Makers Wanted” is apparently an industrial park near Chicago.

Why watch it? Okay, so you didn’t watch every college football bowl game. We’re only four days in, and this is Bowl Game #10! Oh, the humanity! But, you should watch this one, because Gabriel Davis is making a name for himself as a wide receiver. The 6’3″, 212-pound wideout from Sanford, Florida, has over 1,200 receiving yards, and as a route runner is as smooth as a silk pillow. Also, Bad Boy Mowers always has some of the best ads.

These are two pretty good, but not great teams. Wake Forest doesn’t make the postseason with great regularity, so there is some fun in watching them. The fanbase of a team that mostly stays home during bowl season will get up for a game like this. For all of that, though, the New Era (they make every baseball cap worn in every Major League Baseball game) Pinstripe Bowl is fun to watch, because of the weather! It’s two days after Christmas, and we’re in New York! It could be zero, with a wind chill of -40! Happy bowl season, fans! The picture below doesn’t do justice to how cold it could be. Watch it at home with a cup of hot chocolate and a blanket over your legs. 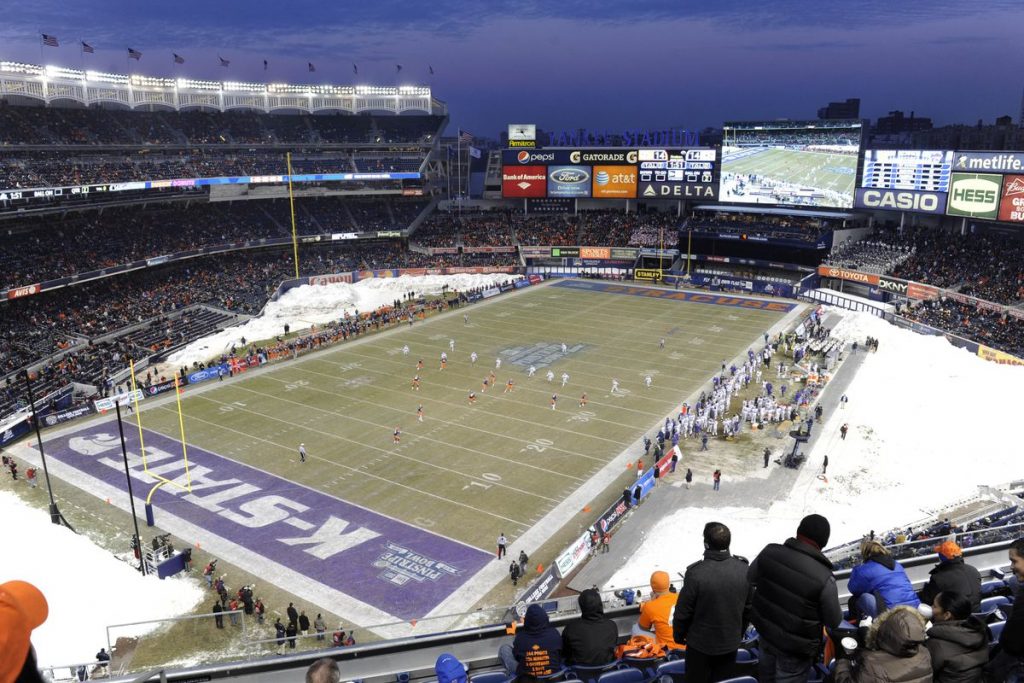 The 2019 bowl games on our radar includes this one in frigid New York City.

First of all, I have nothing against El Paso. I drove by it once, and it was there. Also, (and this may not be in the best spirit of Christmas, but hey, this game is played New Year’s Eve), what happened to Florida State? An organization used to the best things doesn’t play New Year’s Eve in a game sponsored by the spokesperson for Frosted Flakes! And as an underdog at that! Watch this game to see what the announcers have to say about the state of Seminole football. I won’t ruin it for you. I think I will watch this game with a bowl of cereal.

That’s a somewhat tongue-in-cheek look at the 2019 bowl games leading up to the CFP. Good luck to all the teams, I hope the teams and the fans travel safely to and from. We’ll be back to break down the playoff picture in a couple of weeks.