The pandemic has been challenging for most of us, but more so for some like for restaurants and the meat and dairy industry. Many of us adapted by modifying our dietary habits and having more home-cooked meals while ordering more online. Fortunately, supplies of food were never an issue, but now there is more than a glimmer of hope our food system is improving. Nowhere can this better be seen than the return to the recently expanded and greener to the tune of $1.55 billion New York City Javits Convention Center of the Fancy Food Show after two years of going virtual. Attending the show was like experiencing a massive Broadway opening with thousands of shows of new culinary delights that will hopefully make their way to a food market near you or at least become available online.

This was the 66th year the Specialty Food Association has put on the largest food show in the country with over 1,800 specialty food companies from over 60 countries. They have helped launch such brands as Honest Tea, Ben & Jerry’s, Walkers Shortbread, and Tate’s Bake Shop, as well as regional traditional cuisines, such as the ancient Andean grains of Peru, olive oils from Italy and Spain, and cheeses from France, Great Britain and elsewhere.

The three-day event was well attended with eager buyers from top names in specialty retail, restaurants, and food services along with industry affiliates. The mood was jubilant and incomparable to the previous only virtual meetings. How could it be otherwise with exhibitors overflowing with promoting new items, demonstrations, and most of all tastes, tastes, and more tastes? It was as if for a brief moment there were no problems in the world and everyone was happy. Good food has that power. But it was not just the food but the impressive heightened social awareness of the companies adapting to a post-pandemic world that is becoming greener, healthier, and more ethical in lifestyle for hopefully a more livable planet. 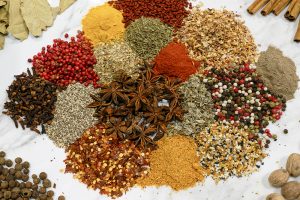 Herbs and spices from around the world.

The food and beverages ranged from several cheese companies that have been around for well over a hundred years to exotic new startups utilizing products previously known only in a small region. Even the old standbys are being affected by the changing world and coming out with for example new products for the home cook. There is a continued growing interest in more healthy foods with less artificial preservatives, chemical dyes, and artificial flavors, along with less meat and reduced plastic packaging.

Companies themselves are changing with more developing better social practices including closer relationships with farmers who are more sustainable in regenerative farming and in protecting the environment. There are a growing number of women-owned businesses as well as minority based with an increase in the diversity of employees. A number of companies are working ethically in war-torn and poorer regions of the world for obtaining the raw ingredients with greater attention to quality and taste, such as grains, legumes, and dried fruits and nuts from Afghanistan. Small, regional chocolates in several South American countries are being promoted for their distinct flavors like vintage wines. In short, the food industry, at least among smaller companies, is headed in the right direction. 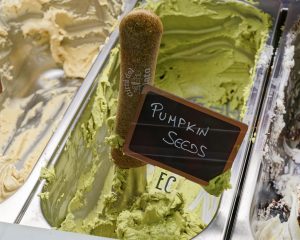 Product of the Year and Others

The grand prize of Product of the Year went to Royal Grade White Sturgeon Caviar by Sterling Caviar. This “black gold” definitely qualifies as “fancy food.” Not exactly cheap but compared to other caviars it is reasonably priced at $92.40 for 30g. The fish are tank-raised in California so no endangered Russian sturgeons are involved. It is a clear standout in taste that takes you back to the ocean. The company has an ongoing collaboration with U.C. Davis and the California Department of Fish and Wildlife to produce a healthy and environmentally friendly product.

Another extremely fancy food was at the Japan pavilion where they are noted for their high-end healthy foods. They had tastes of a fresh melon that was simply sublime. Each melon is given personal attention while growing in a greenhouse, and only one fruit is allowed to develop per plant. Each fruit is carefully inspected with only the best ones packed in a beautiful box and sold for $150! It is obviously only for very special occasions.

There were very few fresh fruits at the show but a lot of dried and frozen fruits and vegetables and many nuts and seeds. Awarded best new nut oil is Oliver Pecan Company’s 100% Pure & Natural cold-pressed Pecan Oil. Pecan oil is one of the most versatile and healthy yet little-known cooking oils on the market with a smoke point of 470 degrees and a wonderfully buttery flavor of pecans from Texas trees.

Città del Gelato is an Italian company that makes artisanal gelato in many enticing flavors, one being pumpkinseed. There is a special pumpkin seed only grown in a few countries that are unique in being hulless. In Italy, they are called bruscolino. However, the seeds used to come from Ukraine. The company’s motto, “happiness has a taste” is definitely applied here!

An example of a change due to the pandemic is being addressed at a cheese company in Turkey using modern technology. Many of us are staying indoors more and therefore not receiving an adequate amount of vitamin D through the skin from the sun. Muratbey is combating this by fortifying a line of their cheeses with vitamin D while also giving full weight to flavor. An exhibitor at their booth was unable to explain how this is accomplished.

In short, good food brings out the best in us. So many food companies are doing wonderful work and deserve to be better known. Every purchase you make for the table is a vote for the food company and all the workers behind it. I encourage you to check out their websites. In part 2, we will cover plant-based foods at the Fancy Food Show.

When Is The Right Time to Buy New Clothes?