Our species is quite complicated when it comes to food. It seems like the more we learn about nutrition and diets, the more complicated the subject becomes. On the other hand, species such as the giant panda, subsist almost exclusively on bamboo, which makes the job of a panda nutritionist rather simple (not to denigrate panda nutritionists).

Our teeth and jaws indicate that we are basically food generalists who can eat many kinds of both plants and animals, i.e. we are omnivores. Throughout human history, however, there are people who thrived on an all-meat diet while others only ate vegetables with no ill effect. Over the last two million years, there appears to be an evolutionary trend within our genus Homo to a more diverse diet than our extinct ancestors. We are a very adaptable species.

What we are eating today is even quite different than just a few generations ago, which in turn differs from just a few generations before that. And going back to Colonial times and earlier, all food was of course basically local, organic, and all about making do with what was available at the time with minimal processing. Some of that food is sadly no longer available to us due to extinction and degradation of the environment, while no previous civilization has ever had the wide selection of foods that each of us has today. 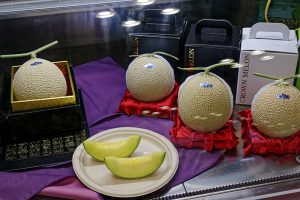 We have gone through a number of food revolutions due to improvements in transportation and technologies in food preservation, farming, breeding, and yes, the good and bad of food industrialization. What may not be appreciated is we are actually going through another revolution right now, perhaps the biggest revolution in 10,000 years, i.e. the period when we learned how to milk cows, bake bread, and domesticate food plants and animals.

This revolution may be summed up by the term “plant-based foods,” which at its simplest means eat more plants, less meat, and at its strictest, be vegan. There are a number of more specific definitions, and in short, there is some confusion over what exactly is meant by plant-based foods. Clearly, there is a trend away from foods involving animals that the meat and dairy industry so heavily lobbied for starting in the 1950s. The dairy industry in particular is in decline for various reasons. In November 2019, one of the largest dairy manufacturers, Dean Foods, filed for bankruptcy. After 90 years in business, New York State’s Elmhurst Dairy switched over to nut-milks.

The reasons for this change in public attitude towards meat are several but can be boiled down to the following four categories: 1) animals, particularly beef, are inefficient at converting feed plants to meat and are therefore less economical, 2) the greater awareness of the mistreatment of factory-farmed animals and the disapproval of taking the life of fellow warm-blooded animals, 3) health and nutritional issues, and 4) environmental issues, most critically the significant global greenhouse gas emissions coming from farm animals. We have already lost 20% of the Amazon rainforest due to the cattle industry.

There are also advocates of an animal-free diet based on religious beliefs, for example, those of Adventists. Religions with rigid dietary restrictions have largely approved of plant-based alternatives, even the Orthodox Jews in consuming plant-based pork.

To some, plant-based foods specifically mean fresh, whole, unrefined or processed foods from plants with no additives. White sugar and white flour are therefore not considered to be plant-based nor is high fructose corn syrup. In white flour, the bran and germ of the wheat grain are removed, which cuts out much of the protein, fiber, and nutrients, and may result in adverse health effects.

However, you define plant-based food, products representing those various definitions were present at the international 2022 Summer Fancy Food Show in New York, the largest food show in the country for promoting new products in the trade industry. Plant-based foods have skyrocketed in just the last few years. Shown are some noteworthy examples and the broad range of these healthy, new, innovative, not to mention tasty products, along with fascinating stories on their websites. Some are even revolutionary!

The most obvious plant-based foods are… well, the basic plants themselves, from whole fruits, vegetables (including legumes), nuts, seeds, grains, herbs, and spices, to algae (including seaweed and Chlorella) and fungi (including mushrooms and yeast). The significant change is that there is a growing diversity of new plant foods coming on the world market, thus making them all the more enticing. New plants are being substituted for old standbys, such as alternatives replacing durum wheat in the making of pasta. There are now pastas made from other varieties of unrefined wheat and other grains, even quinoa, and various legumes. 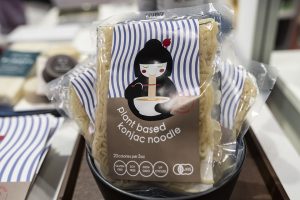 Also, there is a change in how some of these basic ingredients are being processed, most notably to imitate meat and dairy, as shown in some of the figures. While the consumption of meat has begun to slow down in parts of the world, it is still a $1.4 trillion industry. Even here plants are playing a growing role, especially for pasture-raised animals, in enriching the animal diets.

Some consider plant-based foods as specifically meaning foods that mimic and therefore replace meat and dairy. That includes providing an equivalent source of protein and other nutrients. The East has had protein-rich plant products for centuries, especially soybean-based tofu. In the 1970s and 80s other legumes and nuts were used in vegetarian restaurants to make meat alternative burgers, such as the “gardenburger” in Oregon. These bore little resemblance in taste to their meat counterparts. Large industries, including Burger King and Kellogg Company, joined in the act of coming up with meat alternatives.

The two largest plant-based producers of imitation meat on the planet today are Beyond Meat and Impossible Foods, both having started in Silicon Valley a little over a decade ago with their first products sold around five years ago. They have directly taken on the meat industry by more closely resembling meat in texture, appearance, and taste, even in the case of Impossible Foods to “bleed” like red meat from a plant-based ingredient called heme, a precursor of hemoglobin. Heme is manufactured from bioengineered yeast that undergoes a fermentation process after it has had protein from soybean root nodules incorporated into the single-cell organisms. This not only gives the appearance of meat but also its meat-like flavor. Beyond Meat uses a different approach starting with the legume yellow peas for the protein and incorporating a more complex assortment of plants.

Innovations, particularly in the laboratory, in getting plants to taste more like food from animals are proliferating. For example, Bored Cow uses vegan-friendly whey protein along with real milk protein made by microflora instead of cows through a fermentation process. Plant-based ingredients are added to help round out the dairy experience. Vitamins and minerals are added while the “milk” remains lactose-free.

Even more extreme, in 2013 Dutch scientists created the first truly meatless mockup with a lab-grown burger developed from cow muscle cells and fetal calf blood. This is therefore not really meat nor a plant and could be called in vitro food. The result was patties recognized as tasting close to fast food meat but not prime meat.

Replacing meats with plants in a high-tech fashion is estimated to eat 10% of the traditional meat market over the next decade and will reach $140 billion. The powerful meat industry is fighting back by insisting the terms “meat” and “milk” can not be used if they did not originate from an animal.

How similar are plant-based meats today to the real thing? Apparently enough to worry the meat industry. In France, the pork lobby INAPORC has accused vegan bacon producer La Vie of unfair competition. In response, La Vie posted a full-page daily newspaper “love letter” to INAPORC thanking them for the compliment. The French government was not amused and issued a labeling ban of terms such as “sausage,” “steak,” and pertinently, “bacon” on packaging for plant-based products. This was set to go into effect on October 1, but the French high court Conseil d’Etat paused the ban to assess its legality and proposed timescale. Stay tuned for further developments!

Some meat titans see the writing on the wall and have begun investing in their own plant-based innovations. Fast food burger joints are opening up to non-meat burgers. There is evidently more difficulty in coming up with desirable plant-based seafood, not that a lot of companies are not trying the use of seaweeds. As for cheeses, improvements using old-world methods with innovative plant ingredients are being made that already rival bland, processed American cheese.

In summary, we are on the threshold of an exciting food revolution unlike any we have witnessed in historic times. During a previous food revolution, the last wild cow, called aurochs, is thought to have been eaten in Poland in 1627. Now only domesticated breeds of cattle exist. What will happen to them and the other domesticated animals raised for food if we make a complete switch to plant-based and laboratory-grown foods? But maybe that is getting too far ahead of ourselves. In the meantime, let’s embrace the diversity that we get to choose and at the same time stay healthier while helping save the planet.