Home » Travel & Nature » The Best Diner Pancakes in the Whole U.S. of A

The U.S. of A. You have to say it like that when you’re talking about pancakes. That’s because pancakes are the wisp of smoke out of a chimney on a cold winter morn. Pancakes on the mind tickle your olfactory senses with a warm and yeasty smell. Add a little real maple syrup alongside a rasher of bacon, and it’s a country breakfast fit for royalty, whether you live in the country or not. Nobody doesn’t like a good pancake. Sure, there is the timeworn waffle/pancake debate, but waffles are hard to keep hot, while a pancake can steam on your plate. So, we went to where pancakes are treated with the respect they deserve, namely the local diner. You know, that’s where the truckers stop for a short stack and a cuppa joe.

“Syrup” is a relatively new place among the best diner pancakes, but has quickly built an unparalleled breakfast following in the Mile High City. Their Baked Apple Pie Pancake starts with juicy apples cooked into one large and fluffy ‘cake that is ribboned with cinnamon and sugar spice. It is then generously topped with whipped cream and caramel sauce. There are three “Syrup” locations in Denver, but Gildshire’s favorite is 999 18th St, Suite 105.

In the middle of the 19th Century, thousands of Dutch immigrants made their way to the American upper midwest. They brought with them a strong work ethic, a sense of family, and pancakes. Dutch pancakes are thinner than traditional American ‘cakes but thicker than a crepe. We think that makes them perfect. Try the Traditional Dutch, served simply with powdered sugar and a lemon wedge. Or, throw caution to the wind and have a Pannekoeken Huis pancake topped with bananas, pineapple, kiwi, and slivered walnuts. The address is 4995 Excelsior Boulevard.

There is a corner of the restaurant menu that gives suggestions. These include various fruits, nuts, and savory pancake additions. But, a first-timer here is urged to try the Apple Pancake. It’s a souffle for breakfast filled with a fresh apple blend. It is lovingly placed in a hot oven and baked until it grows at least three inches. Then they shellack it with Saigon cinnamon glaze. There is a Pacific Northwest chain that serves a similar dish, but the locals who love Maple Counter Cafe swears that theirs is a better ‘cake. The address is 209 E. Alder St. 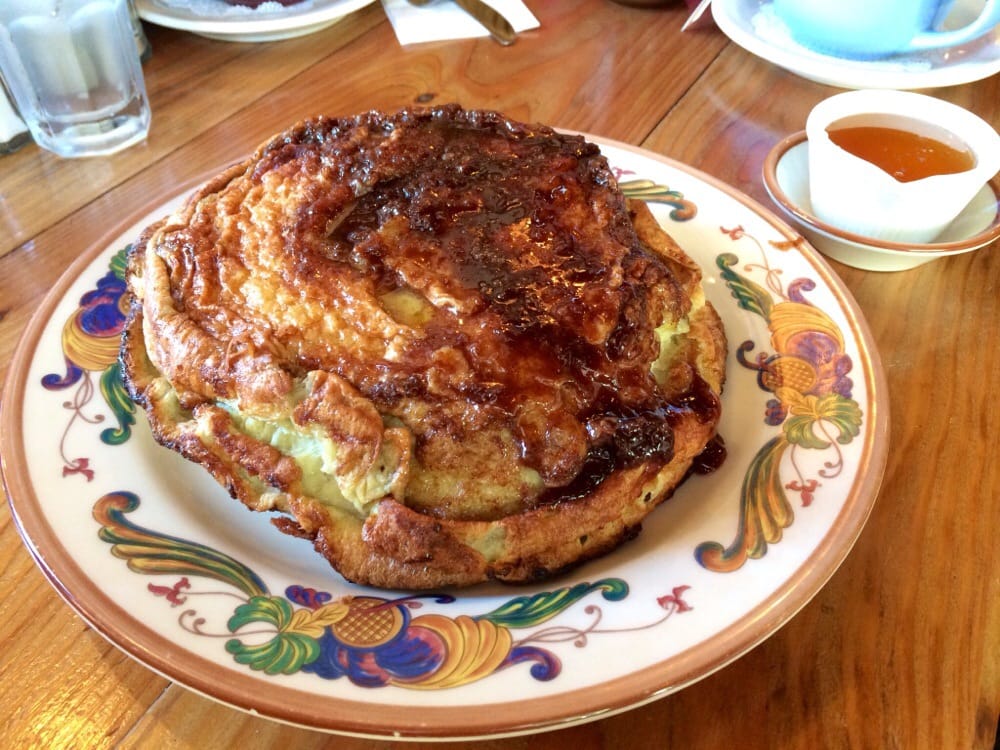 Gildshire won’t argue if you want to call this THE best of the best diner pancakes.

What is it about the upper midwest? You would think that the winters are cold and a hot pancake is the best way to break the fast. Oh, that’s right. Anyway, the All Day folks swear by caramel banana pancakes. The batter is laced with molasses, and the final product is topped with bananas and sliced strawberries, a citrus-rum caramel drizzle, and vanilla bean whipped cream. “Google,” when’s the next flight to Sioux Falls? When we get there, our GPS will lead us to 2101 West 41st St.

Brunch is experiencing a renaissance built on avocado toast and a desire to sleep late. Milktooth is cashing in with a breakfast spread that is causing waiting lines seven days a week. Why the big crowds in a converted garage? Some say it is the Tarte Tatin Dutch baby, which is topped with roasted apples, a lemony caramel sauce, and whipped sour cream. The hungry crowd will be gathered at 534 Virginia Ave.

A day hanging ten in the Pipeline can be exhausting. So, can a day shopping. Either way, a pancake is the right answer to start your day. At Cinnamon’s, tourist (haole) and native alike belly up to the table for a Guava Chiffon Pancake. It’s sweet guava topped with two sauces, one (the pink) sweeter than the other (the darker red sauce.) The whole thing works together as if a smooth song from the lips of Don Ho. The tastiness is found at 315 Uluniu St., so Aloha Oy.

Here is where you will find a mouthwatering pancake menu with 18 specialty options. Do you feel like M&M cakes? How about birthday sprinkles, or cookie dough? The German chocolate and caramel pecan options are great, too. But, Gildshire likes the Boston Cream Pancakes the best. The river of sweet cream and slow-flowing chocolate speaks to us like a bowl of oatmeal never will. The address is 349 Washington Street.

Those are our choices for the best diner pancakes in the country, and we think you will find them memorable, as well. Bon appetit.