Wow, what a tournament this has been! While it is always difficult to name any single sporting event the “best ever” this tournament offered us all of the key elements. Buzzer beaters rocked the rafters as delirious fans celebrated an unexpected win. Ten-point-fifteen-point-twenty point comebacks took place in every region. There are two bluebloods in the Final Four for fans who like traditional powers. One Cinderella stands in place for fans who like underdogs. Then there is Sister Jean, the 98-year-old chaplain of Loyola-Chicago. All of that and a weekend to go. Today, Gildshire predicts the latest sports news, even before it happens! The outcomes of all three remaining games. Who better, since our bracket is perfect? (If you believe that, Gildshire further predicts you believe anything.) Who is still standing as the Final Four approaches? Let’s break it down, team by team.

Bluebloods: Villanova and Kansas qualify as bluebloods, partly because ‘Nova was the 2016 National Champion, having taken down North Carolina in the championship game two years ago. It was their second title and third appearance in a title game. While that is almost enough to qualify as a blueblood, Villanova is firmly ensconced in NCAA lore for their unlikely victory over heavily-favored Georgetown in the 1985 title game. This is the Wildcat’s sixth appearance on college basketball’s biggest stage. Kansas is as big of a name in college basketball as any team in the country. This is the Jayhawks’ 16th time to the Final Four, trying for their fourth championship ring. Even with that pedigree, Kansas has its detractors. The bar is set pretty high for Bill Self and his Jayhawks, and championships are supposed to be frequently garnered, at least according to the fans in Lawrence.

Redbloods: A traditional power, without a blueblood’s chops. That’s the Michigan Wolverines. Longtime fans will remember the 1989 championship team, which was led by an unlikely Head Coach. Steve Fisher, named the interim coach, led the ’89 Wolverines to the title that year. Younger fans will remember The Fab Five, a quintet of freshmen who came to Ann Arbor expected to win 3-4 championships. They reached the 1992 and 1993 title games as freshmen and sophomores, only to fall short both times. However, most of their wins and both of their Final Four appearances were vacated due to Chris Webber (and others) accepting money, thereby compromising their amateur status. 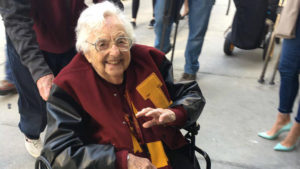 Sister Jean, Loyola (Chicago) chaplain and friend to all.

Cinderella: Ah, the Ramblers of Loyola University Chicago. Every tourney needs its Cinderella. The shoe fits, and on several levels. Even the school’s name seems to be out of place, at least by comparison to the other participants in the Final Four. “No, not that Loyola, the other one. No, not that one. The OTHER one.” Loyola-Chicago’s unlikely run to the Final Four came about after a 15-3 conference season, followed by three tournament wins of the nail-biter variety. All doubters were silenced, though, this last weekend when Loyola (Chicago) was much the better team than favored Kansas State. Who gets the credit for Loyola-Chicago’s magical run? Head Coach Porter Moser leads the team, and five players score in double figures. But, Sister Jean and her spiritual guidance! In fact, let’s give her the lion’s share of the credit, just because it is fun to do so.

So, what happens this weekend? Will the chalks rise up and smite down the pretenders, or will the underdogs continue to make this a tournament for the ages? Or, will there be a little bit of this and a little bit of that? Let’s look at the matchups, with an eye to deciphering the weekend to come.

Loyola (Chicago) versus Michigan, 6:09 pm Eastern/3:09 pm Pacific. It has been a beautiful run for the Ramblers, and they will have the balance of the fan support at the Alamodome in San Antonio, the site of this year’s Final Four. That is always the case, at least when it comes to underdogs. That said, the Wolverines’ size and strength may be too much for the gutty Ramblers. Gildshire predicts a 63-55 Michigan victory.

Kansas versus Villanova, 8:49 pm Eastern/5:49 Pacific (time approximate). The Villanova Wildcats marched through this tournament, with a greater margin of victory than any of the team’s still standing. The duo of Jalen Brunson and Mikal Bridges are poetry to watch. The Jayhawks match up with the superb Devonte’ Graham and Sviatoslav Mykhailiuk. This should be an entertaining matchup, with each team able to run or slow it down, depending on the pace of the game. Gildshire predicts a tight first half and a 71-65 Villanova victory.

Championship Game: If our crystal ball is clear, Villanova and Michigan will square off Monday evening for the right to celebrate One Shining Moment. (That’s the song that serenades the winner of the championship game.) Gildshire predicts the Villanova Wildcats will cut down the nets, thereby affirmed as the 2018 NCAA National Champions. Final Score, Villanova 74, Kansas 65.

So, how do you think we did? Phat City, right on top of things, or sadly lacking in sense? This weekend will tell the tale, so enjoy the games.

The Rarest Diseases Ever Recorded