The NY Open Tennis Tournament is held on the black courts of Nassau Veterans Memorial Coliseum. It is a tour stop known for thrilling comeback stories, Cinderella efforts, and hard-fought competition. For the second year in a row, Gildshire covered the semifinals and the finals at the NY Open tennis tournament. Our Lev Radin was there with pictures and background of what is becoming a pre-eminent tournament on the ATP tour.

Number Eight Seed Kyle Edmund burst on to the court Saturday and wasted zero time, racing into the final with a 6-1, 6-4 win over sixth seed Miomir Kecmanovic. After the match he had this to say:

This is great to be back in a final, playing the matches you want to be playing. I obviously want to go all the way, but I’m enjoying my tennis. I’ve kept improving and learning with each match. 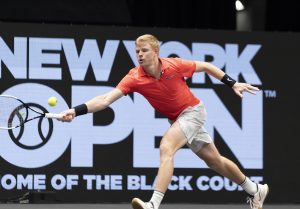 It was only a year and four months ago that Edmund was a stranger to the Winner’s Circle. Then with a victory in Antwerp, the 25-year-old Brit came into prominence. However, since then, he had yet to reach a final. Did the drought worry him? Perhaps internally it has, but outwardly he has remained unflappable, dropping but one set this week.

The first five games of the semifinal with Miomir Kecmanovic went to deuce, but Edmund was dominant in those situations, coming out atop his for each time. Striking his right forehand authoritatively, he used it to best Kecmanovic in virtually every baseline exchange. The 6-1 Gentlemen’s Sweep belonged to Kyle Edmund.

Kecmanovic improved in the second stanza, staying with Edmund. But the Brit took over in the end, breaking his opponent at 4-4 and rifling four aces to end the match.

In the second semi of the afternoon, Italian Andreas Seppi ended the dream of qualifier Jason Jung with a 6-3, 6-2 drubbing. The grind of five matches in six days finally got to the young native of Chinese Taipei. His vaunted groundstrokes failed him at just the wrong time. Seppi built a 4-1 lead, and the next baseline error on the part of Jung effectively ended it.

After his semifinal win, Seppi had this to say:

When you’re in the semi-finals or final, of course, you want to win the title. Tomorrow is another chance and I’ll just try my best,” Jung is coming through the qualifying and had some great wins. He has a really solid game and it was my best match of the week. I played really well from the beginning to the end, very solid, no mistakes. 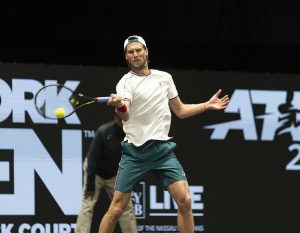 As it turned out, Kyle Edmund saved his best tennis for Sunday, firing winners in eight of the last nine games to overwhelm Seppi 7-5, 6-1. Youth is being served…and serving!

The 25-year-old Edmund improved to 7-3 this year and now leads Seppi 5-1 in their ATP head-to-head series. That lofty record includes a straight-sets shellacking last month in New Zealand.

How to Decorate a Year-Round Holiday Tree