Text and photos by Lev Radin

Two most prolific long players of the 2022 season reached the US open men’s final – Carlos Alcaraz of Spain and Casper Ruud of Norway. Both surely deserve to be on that stage. Ruud already reached his first Grand Slam final at Roland Garros this year and Alcaraz already won 4 titles this year. Both players were seen as true successors to the big 4: Federer, Nadal, Djokovic and Murray.

The road to the final was more challenging to Alcaraz than to Ruud. Alcaraz endured 3 5-setter matches and was tired, however it was him who drew the first blood and won the first set. Second went to Ruud.

The third set was as entertaining as gruel for players and eventually went Alcaraz way and after that he just romp to the victory in 4 sets. For 3 hours and 20 minutes the crowd filled the stadium at capacity, thrilled by the magnificent display of skill and determination by both players. 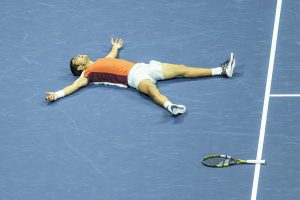 New York, NY – September 11, 2022: Carlos Alcaraz of Spain fell on the court after victory in final of US Open Championships against Casper Ruud of Norway at USTA Billie Jean King National Tennis Center

Alcaraz became the world number 1 and we truly believe this is just the first of his many Grand Slam titles in the future. He is the youngest US Open final winner since Pete Sampras. For sure, will see more of the rivalry between these two players. As Alcaraz said during the trophy presentation: “It’s something that I dreamed of since I was a kid—to be No. 1 in the world, to be the champion of a Grand Slam. It’s something that I worked really, really hard”.

The women’s final featured two players who had never been on this stage of a tournament before. Iga Swiatek of Poland and Ons Jabeur of Tunisia.

Both players had great year so far with Jabeur claiming 2 titles and 3 finals including Wimbledon and Iga won 6 titles including Roland Garros.

Both women made history as Jabeur is the first Arab and African woman to reach US Open final and Swiatek the first Polish woman to be in the final as well, the first being top ranking in the final since Serena Williams achieved it in 2014. They did not disappoint the crowd and played wonderful tennis throughout the match.

However it was Iga Swiatek who drew the first blood immediately when the first set started by breaking Ons’ serve. Iga quickly won the set. The second set was a more different affair. Both players won 2 break points and came down to a tiebreak which Iga won and again it was like a pendulum as players exchanged mini-breaks a few times. At the end of the day it was Swiatek who prevailed with the score 7 – 5. 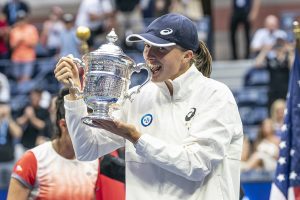 Incredibly, it was the third time when Swiatek played the final of a Grand Slam and she won all of them. That might be a factor of experience playing so many successful finals. Despite the loss, Jabeur is inspiring many young women in the Arab world and in Africa in particular to play tennis or any other sports and be successful.