Home » Our World » Kickoff 2019: Questions Facing the Teams in the NFC West

The National Football League has eight divisions, each of them with a personality of its own. The AFC North, for example, prides itself on its toughness, playing in the chill of the winter months. The NFC West, on the other hand, is a division of Hollywood. Glamour cities dot the division. San Francisco, Los Angeles, and Seattle are vacation destinations, while Phoenix is a place people go, and stay for six months at a time! Warm weather, albeit a little rainy in Seattle, is de rigueur in the NFC West. “It’s too hot in Arizona.” Okay, let’s play in air-conditioned comfort. How does seventy-two sound? The NFC West is also known for “almost.” The Rams almost beat the Pats in the last Super Bowl. The Seahawks almost beat the Patriots a few years ago. The questions facing the teams in the NFC West are about getting past “almost.”

The Cardinals were “almost” status in Super Bowl XLIII. They had the Steelers on the way out, but couldn’t close the deal. But, that was eleven seasons ago, and since then the Cardinals have been almost terrible. Last year, they achieved terribleness. Enter Number One overall draft pick Kyler Murray, (to replace last year’s top draft pick, Josh Rosen.) Lacking in size, but jackrabbit fast, and possessing a great arm, Murray will try and do his part to bring the Cardinals out of the doldrums. New coach Kliff Kingsbury brings his run-and-gun collegiate style to the NFL and is anxious to show off with his new quarterback. 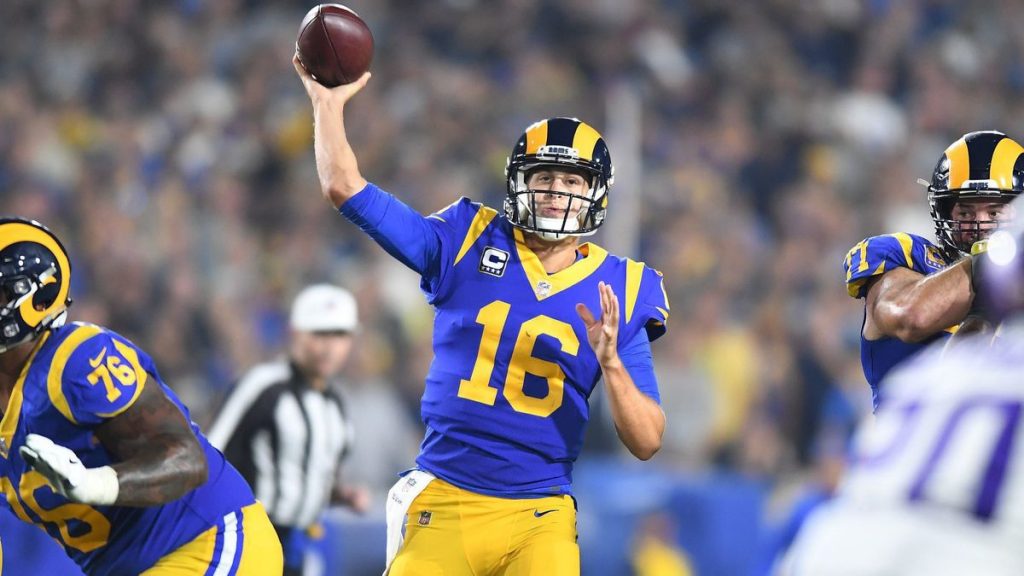 Questions facing the teams in the NFC West include a few about Rams’ quarterback Jared Goff.

For half of the 2018 season, the glamorous Rams were the talk of football. Scoring points at will they piled up stats and wins. Then, in the second half of the season, the parade slowed a bit, and quarterback Jared Goff looked somewhat pedestrian. In the Super Bowl, against New England, the parade ground to a halt. Again almost. Running back, Todd Gurley developed health issues. Will he be back to his old form, or will his health be an issue for the 2019/20 season. Rams’ Head Coach Sean McVay admitted that he was outsmarted by Patriot’ Head Coach Bill Belichick in the Super Bowl. Will he learn from his mistakes? The Rams can be greater this year than last, if they answer these questions correctly.

The 49ers were no one’s “almost” last season. When quarterback Jimmy Garopollo injured himself in the season’s third game, the Prospectors were cooked in their juices. “Jimmy G.” as he’s known in The City by the Bay is back this year, but the Niners haven’t seen enough of him to know what they have. Spotty in the preseason, Garopollo needs to prove he is a franchise quarterback if the 49ers have any chance at all. The team improved its defensive structure in the offseason. Can Garopollo take advantage?

Seattle Seahawks, last season 10-6. Lost in the Wild Card round.

For years, the Seattle Seahawks have made hay off the fact that quarterback Russell Wilson was getting third-round money. That gave the Hawks flexibility to buy good players and put them in backup roles. Cliff Avril comes to mind. Now, Wilson has a new deal, and the Seahawks have a new reality. They must budget around the gazillion dollars they paid their quarterback. Can they do that, and remain competitive? That’s the biggest question facing this team. It still has strengths, and it still has Head Coach Pete Carroll, chewing gum like a madman. But, will it have the depth to make it through a rigorous season? Or, will it be…almost a playoff contender?

Soon, the questions facing the teams in the NFC West will begin to be answered. The 2019/20 National Football League season is here! Twenty-one weeks of offense, defense, and special teams. Gildshire can’t wait, and we know you can’t either.